Can we boost crop yields by making photosynthesis better with genetic engineering?

In the hot springs of Yellowstone National Park, layers of colorful bacteria grow in thick mats. Near the water’s surface, the green organisms photosynthesize like plants do, using light and chlorophyll to split water molecules and make sugar. Farther down in the mats, the microbes are black. Researchers long assumed that plant-like photosynthesis is not possible for this layer of organisms because they don’t have access to enough visible light. And yet, on the very bottoms of those algal mats is a layer of green where no green should be. So why is it here, where almost no light reaches?

In June, Bill Rutherford and his team at Imperial College London discovered that photosynthesis using near infrared light — the type found in heavy shade — is possible, and even widespread, in cyanobacteria. This finding contributes to a growing body of research in the field of photosynthesis engineering, which aims to improve crop yields by using genetic techniques to improve a plant’s ability to capture sunlight and produce sugar. The implications are huge. By the year 2050, the U.N. Food and Agriculture Organization predicts that crop yields will need to be 60 percent higher relative to 2005 levels in order to meet increasing food demands. Conventional breeding has largely reached its full potential for yield increase. As such, using genetic engineering to target photosynthesis may be one of the few avenues left with significant room for improvement.

Of course, plant researchers have been thinking about using improved photosynthesis to increase crop yields for decades, but recent leaps in computer modelling and genetic engineering techniques have started to bring that goal within reach. In 2011, and again in 2015, a group of scientists came together to publish an article that called for research into the improvement of photosynthesis as a means for meeting the increased yield demands of coming decades, as well as laying out potential strategies. One of the strategies the group highlighted was the possibility of engineering plants to use near infrared light.

The ultimate goal would be to design a leaf canopy in crops that absorbs visible light in the upper leaves while using lower leaves to absorb the infrared light that passes through to ground level. Currently, the top of any canopy absorbs more light than a plant can use, explains Don Ort, a professor at the University of Illinois and lead author of the 2015 paper. Plant scientists hope to engineer crops that can perform efficient photosynthesis deeper in the canopy — similar to how cyanobacteria perform photosynthesis deep in the algal mats of Yellowstone. 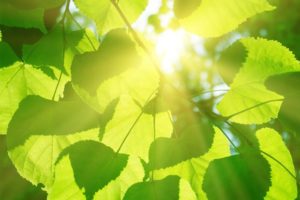 This requires a solid understanding of the different kinds of chlorophyll found in nature. Photosynthesis is nearly universally carried out with chlorophyll a, which uses visible light to split water. A variation, called chlorophyll d, does use near infrared light, but chlorophyll d is found in just a single genus of bacteria. Scientists discovered chlorophyll f in 2010, but it wasn’t known to be involved in water-splitting until Rutherford’s discovery this past June. What’s more, the newly studied system retains the ability to use visible light as well because the cyanobacteria contain chlorophyll a and chlorophyll f.

Ironically, Rutherford had been skeptical of the idea of improved photosynthesis in crops, and of near infrared photosynthesis in particular, because he predicted that plants engineered to use infrared light would be less robust when faced with environmental variation. Referring to the group of scientists calling for the improvement of photosynthesis, he says, “I was criticizing the ideas . . . only insofar as there’s going to be a resilience hit.” He thinks this resilience hit might render the crops useful only in highly controlled conditions with artificial lighting — he mentions submarines and spaceships.

Still, he grants that his recent discovery changes things. “So having criticized them, I’ve now handed them the fact that it actually works — out there in biology.” Thanks to their ability to produce chlorophyll a and f, cyanobacteria can thrive in variable light environments. “And once you’ve found something out there in biology, it’s much better than engineering it because it’s had a very long time to improve” through evolution, says Rutherford.

Though near infrared photosynthesis in crop plants is still a far-off possibility, other means of improving the efficiency of photosynthesis are farther along. Ort serves as deputy director of a research collaboration called RIPE (Realizing Increased Photosynthetic Efficiency), funded by the Bill and Melinda Gates Foundation. This project has resulted in two approaches that are already making progress in field trials.

The first strategy, called photorespiratory bypass, targets an inefficiency in plant photosynthesis. Paul South — pictured at right in the image above — a post-doctoral researcher who works with Ort on the RIPE initiative, explains that when a plant performs photosynthesis, it periodically interacts with oxygen, rather than with carbon dioxide. This generates toxic byproducts. The byproducts can be converted into other molecules which do contribute to photosynthesis, but this side-reaction “reduces the [plant’s] energy efficiency quite a lot,” says South. The goal of his research is to engineer plants that convert byproducts more efficiently.

A second strategy, called relaxation of photoprotection, targets a reaction in leaves that converts solar energy to heat that the plant can dissipate to avoid sun damage in high light levels. The defense mechanism turns on very quickly, but is slow to turn off when light levels drop, causing the plant to dissipate valuable energy as heat. Researchers have now figured out how to turn it off much more quickly. This line of research has already been tested in field experiments with tobacco, a fast-growing model crop, and has resulted in plant dry weight increases of around 15 percent.

With climate change an ever-present concern, some of RIPE’s strategies are being undertaken with an eye toward challenges that will be faced by future growers. Greater variation in weather will mean crops need to be robust in a wider range of conditions, as well as rising CO2 concentrations. “The ancestry of most of our crop plants evolved at a CO2 concentration in the atmosphere somewhere around 220 parts per million,” says Ort. Over the last 150 years, that concentration has skyrocketed to 400 parts per million. “There hasn’t been time for there to be natural adaptation through mutation and evolution,” he says.

RIPE is also looking at engineering crops that can photosynthesize more efficiently at higher temperatures. “We are thinking about this in terms of inducing thermal tolerance in some of the crop plants because temperatures are going up. There’s no question about it,” says Ort. Countries in the developing world, expected to be some of the hardest hit by climate change, could also benefit from the work of RIPE, since the Gates Foundation’s funding stipulates that all discoveries be made freely available to farmers in developing nations.

Asked about the “resilience hit” mentioned by Rutherford, South responds, “It’s definitely a concern.” While agriculture in the United States is highly controlled in terms of fertilizer and water input, it’s important to see how plants cope under realistic conditions. “You definitely need to get out into the field and do field studies,” says South. His group is still in the proof-of-concept phase, doing experiments in model crops. They hope to move to food crops within the next five years. Then, the technology has to go through safety regulations, which can add another ten years or more.

So will the improvement of photosynthesis make up for the food shortfalls we expect to face? It isn’t the only way researchers are attempting to anticipate demands for increased crop yields, says South. For example, better land management practices could improve productivity. And post-harvest, it’s possible to reduce food spoilage and waste. “But in terms of [the plant itself], I think the most wiggle room is really there in photosynthesis,” he says. Or, put another way, “The only thing left with the capacity to, say, double yields … is really photosynthesis.”

Erin Zimmerman is a plant biologist turned science writer and botanical illustrator. She holds an MSc in fungal genomics and a PhD in molecular systematics, and is a former Agriculture Canada researcher. Her work also appears in New York Magazine’s The Cut and Working Mother Magazine. Follow her on Twitter @DoctorZedd

This article originally ran at Undark as Can Better Photosynthesis Help Feed the World? and has been republished here with permission.