The traits bred into animals with recombinant DNA are considered “animal drugs”. Thus, a New Animal Drug Application (NADA) must be submitted to the Center for Veterinary Medicine (CVM), which conducts an Environmental Assessment (EA) of potential environmental impacts and determines whether the animal presents any credible risk to human health. In 2017, the FDA asserted authority to regulate traits arrived at through gene editing in the same way. New gene-edited traits in animals will need to be submitted to the CVM for the foreseeable future.

While the USDA is involved in funding R&D in the sector, it doesn’t have any role in regulating animal breeding.

The first animal bred with recombinant DNA cleared for commercial release was the AquAdvantage Salmon by the company AquaBounty. The salmon is engineered to grow year round rather than seasonally, bringing it to market in less time, requiring less feed and other inputs. The regulatory journey of the environmentally friendly fish has been long and torturous. Interactions with Canadian regulatory authorities is included here for context. [PDF]

1989
• Initial R&D with transgenic salmon begins at Memorial University of Newfoundland.
• Canadian researchers create the AquAdvantage transgene (genetic construct) which expresses Chinook salmon growth hormone under the control of an Ocean Pout promoter.
• The founder animal from which the AquAdvantage line was derived was created by microinjection of the transgene into fertilized eggs of wild Atlantic salmon.

1995
• The company establishes an Investigational New Animal Drug (INAD) file with the Center for Veterinary Medicine (CVM) of the U.S. FDA to pursue the development of AquAdvantage Salmon.

2003
• AquaBounty submits to the FDA its first regulatory study for a New Animal Drug Application (NADA). 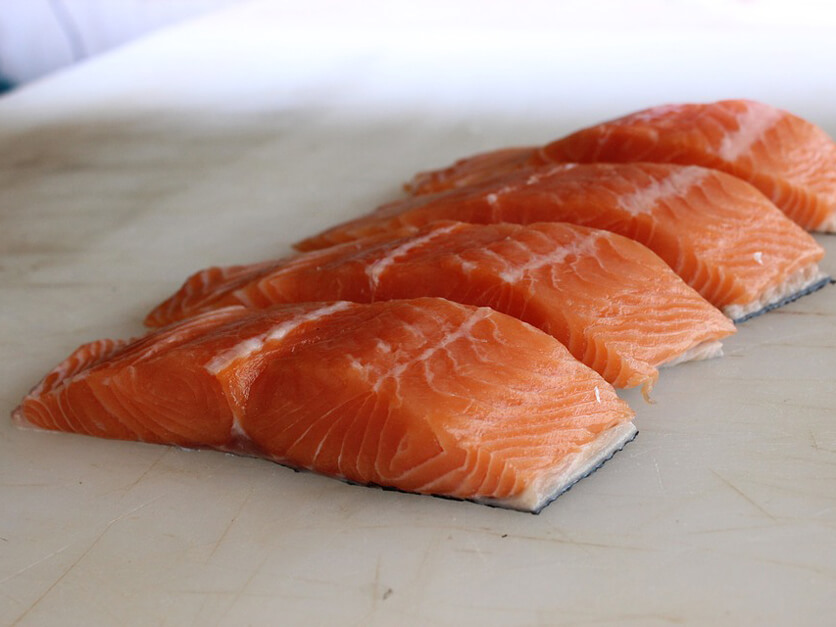 2008
• The FDA inspects (and has no adverse findings) AquaBounty’s hatchery in Prince Edward Island as an authorized production site for AAS eggs.
• AquaBounty Technologies begins construction of a land-based aquaculture grow out facility in the highlands of Panama for the purpose of conducting trials of the company’s AquAdvantage Salmon.

2009
• AquaBounty Technologies submits its final regulatory study to the FDA. CVM releases Guidance 187 for evaluation of genetically engineered animals.
• The FDA inspects (and has no adverse findings) AquaBounty Panama’s site for the production of AquAdvantage Salmon for import into the US.

2010
• AquaBounty Technologies receives section complete letters from the FDA on all seven parts of the New Animal Drug Application for AquAdvantage Salmon.
• The FDA convenes a Veterinary Medicine Advisory Committee (VMAC), a public meeting to review its findings of AquAdvantage Salmon, concluding it is indistinguishable from
Atlantic salmon, is safe to eat, and that it poses no threat to the environment under its conditions of use.
• The VMAC concurs with the FDA; AquAdvantage Salmon is safe to consume and safe for the environment.

2011
• The FDA consults with the National Marine Fisheries Service of NOAA and the US Fish and Wildlife Service, which concur with the FDA’s “no effect” findings that the AquAdvantage Salmon does not pose a threat to the environment.

2012
• The FDA releases its draft environmental assessment (EA) with a preliminary Finding of No Significant Impact (FONSI) for AquAdvantage Salmon.
• The FDA announces a 60-day public commentary period, later extended to 120 days, for the EA and FONSI.
• The FDA visits and inspects AquaBounty Canada’s hatchery in PEI. There were no adverse findings.

2013
• The public-comment period for the draft EA and FONSI concludes in April.
• Publication of a Significant New Activity Notice by Environment Canada. AquaBounty Technologies receives authorization to produce eggs at AquaBounty Canada’s hatchery for
commercial sale. Environment Canada advises AquaBounty Technologies that based on the current proposal in the New Substances Notification (Organisms), AquAdvantage® Salmon is not considered to be a risk to the environment.

2015
• FDA approves an application from AquaBounty for the production, sale and consumption of AquAdvantage Salmon in the United States.

• A law introduced by Alaska Senator Lisa Murkowski and signed into law by President Obama forbids sale of the GE salmon until the FDA publishes information guidelines and mandates labels.

2016
National Bioengineered Food Disclosure Standard is signed into law. The statute blocks states from creating their own GM/GE labels, and calls for the US Department of Agriculture to create final labeling guidelines. For its part, the USDA has stated that it will not issue such a label for GE salmon, because that’s now the FDA’s job. The FDA says that labeling is the USDA’s job.

2017
• The Omnibus Appropriations Act for fiscal year 2017, AquaBounty salmon is prohibited commercially in the United States until “the FDA publishes final labeling guidelines informing consumers of such content.”

2018
• In May the FDA approves an application to raise the product in the US only at AquaBounty’s land-based, contained facility in Indiana. However the company is barred from importing eggs from Canada to begin production until the National Bioengineered Food Disclosure Standard labeling law is finalized by the USDA.

The National Bioengineered Food Disclosure Standard has not been finalized as of December 2018.

2019
• In March, the FDA lifted the ban on imports, allowing a facility in Indiana to begin salmon production using eggs produced in Prince Edward Island, Canada.

US regulations treat gene drives either as animal drugs or toxins depending on the application. US policies and international security regimes rely on a listed-agent-and-toxin approach.

Responsibility for regulating animal applications of gene drives rests with the FDA. An FDA guidance issued in 2009 states that genetically engineered DNA constructs intended to affect the structure and function of an animal, regardless of their use, meet the criteria for animal drugs and are regulated as such. Developers are required to demonstrate that such constructs are safe for the animal. Approval of new animal drugs is to be based on the traditional FDA criterion “that it is safe and effective for its intended use”.

The journal of Science:

It is unclear whether these requirements can be reconciled with projected uses of drives, including suppression of invasive species. Nor is it clear how this guidance would apply to insects.

The application of existing USDA and EPA regulations governing genetically modified organisms to gene drives is also ambiguous, with jurisdictional overlaps across the Federal Insecticide, Fungicide, and Rodenticide Act, the Toxic Substances Control Act, and the Animal and Plant Health Inspection Service.

Where it looks like the USDA and FDA are going to split duties is in the regulation of cultured meat.

In a joint announcement late last week, Secretary Sonny Perdue and FDA Commissioner Scott Gottlieb explained that, under the framework, FDA would oversee the early stages of the cell-culture process, including cell collection, cell banks, and cell growth and differentiation. A transition from FDA to USDA oversight then would occur during the cell harvest stage, and USDA would oversee the production and labeling of food products derived from the cells of livestock and poultry. The joint announcement also noted that the technical details of the framework are being refined, including ensuring that there is robust collaboration and information sharing between the agencies to allow each to carry out their respective roles.