Joseph Opoku Gakpo | Cornell Alliance for Science | April 30, 2019
This article or excerpt is included in the GLP’s daily curated selection of ideologically diverse news, opinion and analysis of biotechnology innovation.

Cotton production in Burkina Faso is continuing its downward slide three years after the nation phased out the use of pest-resistant genetically modified (GM) cotton.

Last April, the Inter-professional Cotton Association of Burkina (AICB), an industry body comprising farmers and other sector players, set a production target of 800,000 tonnes for the 2018-19 cotton season. But the country produced just 436,000 tonnes — despite offering farmers a record US$27.4 million (CFA16 billion) in incentives in the form of subsidies on insecticides, fertilizers and irrigation facilities.

The figures were disclosed at a media briefing organized by the AICB in the capital city of Ouagadougou to mark the start of the 2019-20 cotton season.  The decline in production has been attributed to a number of factors, including regional farmer boycotts over unfair treatment, insecurity resulting from terrorist attacks and bad weather.

But farmers also blame the situation on increased pest attacks following the government’s decision to phase out GMO cotton and return to conventional seeds.

“Yields per hectare have never been so low,” noted Francois Traore, former president of the Burkina Faso National Union of Cotton Producers. “In my opinion, this decrease is mainly due to the parasitic attacks on cotton farmers and the poor quality of inputs.”

As part of an effort to deal with increasing devastation by insect pests, Burkina Faso in 2008 approved the cultivation of GM (Bt) cotton, which offers inherent resistance to the destructive bollworm. These pests have the potential to destroy up to 80 percent of yield on cotton farms. Bt cotton helped farmers cut down on insecticide spray from an average of eight per season to just three. Overall, GM cotton reduced the use of pesticides by up to 70 percent, while increasing productivity by about 22 percent and smallholder farmer profits by an average of 51 percent.

But cotton processers complained fiber from the new varieties was shorter in length and a decision was taken in 2016 to completely phase out GMO varieties and return to conventional seeds. The industry has not recovered since as farmers lament increased pest infestation on fields has resulted in lower yields, leading to the current plummeting of the industry.  Burkina Faso was for a long time Africa’s largest producer of cotton until it lost that position to Mali two years ago, a development linked with the decision to phase out GMO cotton.

The government, cotton companies and farmer groups have announced fresh measures to revive the cotton industry. The price at which processors buy cotton from farmers has been increased by 15 percent to encourage more farmers to grow cotton this season. The government also has committed US$23.8 million (CFA 14 billion) to subsidize inputs for cotton farmers. Prices of fertilizers and insecticides are thus expected to drop drastically. The industry has set a new target to produce 800,000 tonnes of cotton in the upcoming 2019-20 season.

Scientists, however, are cautioning that the cotton industry will struggle to recover unless GMO varieties are re-introduced in the country. They praised the successes chalked up by the GMO varieties following their introduction about a decade ago.

Related article:  Regulation and anti-GMO activism: Roadblocks on the way to saving the American chestnut tree

“More and more producers are grumbling and calling for an immediate return of Bt cotton. Farmers’ discontent is often followed by the abandonment of cotton production by villages and even entire regions at the cotton belt level,” he said.

But industry officials expressed confidence that the new measures will help boost production. 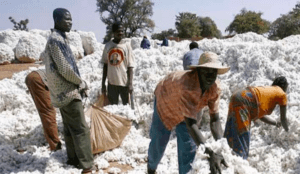 “Our only way to salute the government’s commitment to us will be to flood cotton ginning factories,” said Bambou Bihoun, president of both AICB and the National Union of Cotton Producers of Burkina Faso. “If we have good rainfall, the players plan to meet the challenge of 800,000 tonnes of seed cotton for the 2020 campaign to allow the country to leave the fourth place it currently holds to resume the first in Africa.”

Added AICB Secretary Ali Compaore: “Our industry has more need than ever to bounce back and recover its acclaim.”

Yacouba Koura, vice president of the Burkina Faso National Union of Cotton Producers, told the media in an interview that “thanks to the measures taken, the announced pesticide (price) change and with good rains, we hope to reach the production target.”

Harouna Kabore, Burkina Faso’s Minister of Commerce, Industry and Handicrafts, chairs a committee working to help ensure recovery of the cotton sector. He told a workshop in March that he was confident of a turnaround in the situation going into the 2019-20 season. He said ongoing efforts are in line with “medium- and long-term strategies for sustainably improving the agronomic and socio-economic performance of the cotton sector.”

THE NECESSITY OF RETURNING TO GMOS

Traore, however, questioned why the strategies to revive the sector do not include a push for the re-introduction of GMO cotton. He was critical of the final conclusions of the meeting because it did not advocate an immediate return of the GMO technology to cotton farmers.

The scientists warned the decline will continue if GMO cotton seeds are not re-introduced. “Faced with the stubbornness of leaders to maintain only conventional cotton, many cotton producers are threatening to abandon cotton production again for the coming season,” he told the Alliance for Science. “We at OFAB-Burkina remain convinced that no real revival of the cotton sector in Burkina will be possible without the return of Bt technology in the cotton seed. Therefore, Burkina remains a case study for the profitable cultivation of Bt cotton in the world.”

The National Union of Cotton Producers of Burkina Faso (UNPCB) has always affirmed its support for the GM technology and has been pushing for its return to help ensure a sustainable cotton industry. In a press statement issued in February 2018, the association noted: “UNPCB is for genetically modified cotton because we are all aware of its benefits… UNPCB is committed to finding a solution quickly for the return of the GM cotton together with the cotton companies and the government.”

Joseph Opoku Gakpo is a broadcast and online journalist with the Multimedia Group Limited in Ghana. Follow him on Twitter @josephopoku1990

How the anti-GMO movement has merged with COVID conspiracists

Permanent readjustment: Why COVID-19 is here to stay