Why GMOs aren’t responsible for a spike in food allergies

This article or excerpt is included in the GLP’s daily curated selection of ideologically diverse news, opinion and analysis of biotechnology innovation.
Over the last 30 years, reported cases of food allergies — especially in young children — have gone up.

According to the US Centers for Disease Control and Prevention, about 4 percent of children under 18 have some kind of food or digestive allergy. That number represents an increase of 18 percent for all food allergies among children between 1997 and 2007.

For some foods, the increase has been even greater. For example, peanut allergy prevalence has quadrupled from 0.4 percent in 1997 to more than 2 percent in 2010. In fact, peanut allergy is now the leading cause of anaphylactic shock — the most severe form of allergy — due to food in the United States. And the problem isn’t just confined to the US: hospital admissions for food-related anaphylaxis has seen a seven-fold rise in the United Kingdom since 1990.

So, what’s going on? Assuming these increases are bona fide, what’s causing them?

There is no short list of culprits. Microbiome, Western diet, and socioeconomic status to name a few. A number of groups have also blamed genetically modified food. According to the Organic Consumers Association, the main trade group for the organic food industry:

Genetic engineering, for instance, can increase existing allergens, or produce new, unknown allergens. Both appear to have happened in genetically modified (GM) soy, which is found in the majority of processed foods.

Jeffrey Smith, head of the Institute for Responsible Technology, author of the books Seeds of Deception and Genetic Roulette, weighed in with this advice:

Beginning in 1996, genes from bacteria and viruses have been forced into the DNA of soy, corn, cotton, and canola plants, which are used for food. Ohio allergist John Boyles is one of a growing number of experts who believe that these genetically modified (GM) foods are contributing to the huge jump in food allergies in the US, especially among children. 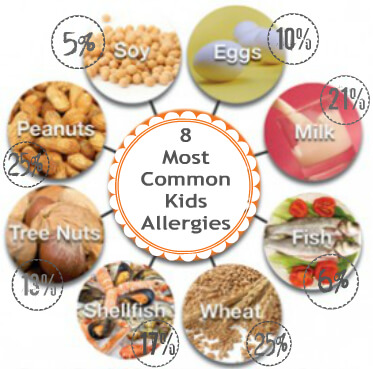 However, of the foods that most frequently cause food allergy, GM versions simply don’t exist.

There is no GM peanut (although development of a hypoallergenic GM peanut is ongoing). There is no GM milk. Or consumable GM egg (although there is now that makes medicine). However, a few cases of allergenicity cropped up during early experiments involving genetically engineered foods, which piqued concerns.

Both of these incidents show one of three ways an allergy risk could possibly increase from GM foods. The incidents involve transferring a known allergen (either a Brazil nut protein, or glycosylation) into a food crop. A second way is to increase the inherent ability of a GM crop to cause allergies. However, no studies have found heightened intrinsic allergenicity when compared with non-biotech equivalents. The third way involves the creation of a brand new, novel protein that could trigger an allergy. Though this last possibility, of a “franken-protein,” has caught media attention and been used by anti-GMO groups, it has not yet happened.

European Union health agencies, and member nation health agencies, as well as the US FDA, EPA and USDA, are all involved in necessary rigorous assessments of GM foods (or any other foods) for allergic potential. The EPA, in fact, maintains an extensive list of foods that could trigger allergies. Another resource used to test for allergens is the University of Nebraska’s Allergen Online, which matches amino acid sequences of possible allergens with reference proteins known to cause allergies. And, so far, no single biotechnology-based protein in food has been found to cause an allergic reaction.

While any food could cause an allergic reaction in somebody, some patterns have arisen:

Related article:  'Headed down the wrong road': The quest for precision medicine distracts us from what already works

If not GMOs, then what?

The causes behind the increase in food allergies are not known. While anti-GMO groups have pointed to biotechnology, there are other proposed causes, each with a varying degree of data to support each:

The typical treatment for food allergy is avoidance. However, some studies have shown some there may be a better treatment, as well as insights into the etiology of allergies.

Allergic reactions are complex. Even though eight foods cause most allergies, many more can cause specific reactions, because everybody’s intestinal, nervous and immune systems are different (not to mention their genetics). While certain genetically engineered experimental foods were found to have allergens, these allergens were known and caught by researchers in early stages, just as a test on organic peanuts would also show a potential allergic reaction in sensitive people. And further studies have shown that transgenics technology does not make a food any more allergenic — but neither does it automatically make it less (unless the target trait is allergenicity).

A version of this article originally ran on the GLP on September 13, 2107.