Regular transfusions of the blood of a younger, physically fit donor can significantly retard the aging process,” proclaims a middle-aged CEO being hooked up to an intravenous line to the buff, young Bryce, the “transfusion associate.” It’s a parabiosis procedure, the CEO explains, in episode 5 of season 4 of Silicon Valley.

Although nothing short of a time machine or death can halt the aging process, the idea of therapeutic benefits from “young blood” has been around a long time. Now, results of a phase 2 clinical trial indicate that something, or some mix of somethings, in young blood is apparently safe and offers the first hints that it might slow the cognitive decline of mild to moderate Alzheimer’s disease.

“Therapies Born from the Science of Aging,” leads off the website for the company developing the treatments and sponsoring clinical trials, Alkahest. Their products aren’t blood, but a proprietary soup of proteins from plasma, which is what’s left after cells and platelets are spun out.

A paper published in January in JAMA Neurology, from Sharon Sha, director of the Stanford Neurosciences Clinical Trials Group and colleagues, reports that four weekly infusions of “young fresh frozen plasma” (yFFP) from males 18-30 into nine patients with mild to moderate Alzheimer’s disease was “safe, well-tolerated, and feasible.” Each participant received yFFP or saline weekly for four weeks, followed by a six week washout period, then flipped to the alternate treatment. Then a bunch of tests tracked changes in cognition and other measures.

A follow-up news release from the company in early August reported that the patients hadn’t declined, functionally or cognitively, over the months since the infusions, as they would have been expected to do.

“These top-line results indicate a potential benefit of this plasma protein fraction in slowing the progression of cognitive decline in patients with mild to moderate Alzheimer’s disease,” said Dr. Karoly Nikolich, chief executive officer of Alkahest, teasing that the treatment “represents an innovative approach to effectively treating Alzheimer’s disease by targeting multiple underlying mechanisms of disease,” which is presumably the intent of administering a “fraction” rather than a specific protein.

I think Alkahest is onto something, although I’m not sure exactly what it is.

According to a report in BioSpace, more than 150 Alzheimer drug candidates have been pulled from clinical trials between 1998 and 2018.

Back to the drawing board?

A proprietary twist on an old idea

Lots of companies pay for plasma, and have been accused of taking advantage of desperate people who need to make money quickly (see How Blood-Plasma Companies Target the Poorest Americans).

An interesting plasma tweak is to intentionally keep the platelets (which release clotting factors) or to ditch them.

In contrast, searching “platelet-RICH plasma” leads to an avalanche of ads waving red flags, to mix metaphors, with the obligatory celebrity endorsements, such as from noted cell biologist Angelina Jolie. Athletes promote injections of one’s own plasma with red cells removed and platelets concentrated, like extra-thick OJ, to heal all manner of injuries and ills.

The claims for platelet-RICH plasma check the first five items on the FDA’s list of 9 Health Fraud Scams: a “quick fix,” “natural“ “one product does it all,” a “new discovery or breakthrough,” and, of course, a “secret ingredient.”

Except that Alkahest’s product does appear to be a “secret ingredient” if it’s proprietary.

So I went in search of the secret sauce.

Company researchers and their associates derive their product from the “plasma proteome,” including “chronokines: proteins that increase or decrease with age” in the blood.

I failed at determining whether “chronokine” is a technical term like “cytokine” that I’ve just never heard, or companyspeak (Google Scholar returned Chinese symbols). The Scientific Root Words, Prefixes, and Suffixes index defines “kine” as “move,” and “chrono” is of course “time,” so a chronokine is a molecule that moves over time, in the plasma portion of blood.

But what’s in it?

The Human Plasma Proteome Project, started in 2002, has identified 3,509 distinct plasma proteins. I contacted half a dozen researchers whose papers are listed on the Alkahest site but none knew, or were willing to disclose, the exact subset of those proteins recruited for the recipe.

So I looked at the patent, issued just a few weeks ago, July 23, 2019, to Alkahest, #10,357,513. Patents are a great way to deduce what things are, like I did here for the Impossible Burger, and also what things are deemed proprietary.

Here’s a nice summary from the patent, citations trimmed:

Blood and blood plasma from young donors have exhibited improvement and reversal of the pre-existing effects of brain aging, including at the molecular, structural, functional, and cognitive levels. Young blood reverses age-related impairments in cognitive function and synaptic plasticity in mice. The present invention relates to fractions and effluents of the blood plasma, some of which have been traditionally used to treat patient shock, and the discovery that they are effective as methods of treatment of aging-associated cognitive impairment, reduced motor function, and neuroinflammation or neurodegenerative-related disease. 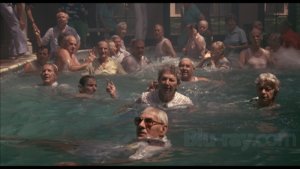 It reminds me of the 1985 film Cocoon, in which a mysterious “life force” gets into the pool water at a facility for old folks and they suddenly fill with zest and vigor. But that was due to interference from extraterrestrials living next door, having awakened from their pods following a 10,000-year sleep. It happens.

Alkahest’s invention is a variation on the theme of taking fractions of the protein-packed plasma. The novelty, in the first claim of the patent, appears to be the application to cognitive impairment due to aging and/or disease – covering all bases. The specifics round up the usual suspects in a plasma-based formulation – albumin and various globulins – but shield the identities of the other proteins in the special sauce.

It’s a little like this amazing recipe from the New York Times for chickpea stew. Like Alkahest’s recipe, some things, like the tumeric and chickpeas, are obvious, like the albumin and globulins. But no one can tell that the secret essential ingredient in the chickpeas is the coconut milk, because of the magic that happens in the mix.

And that’s what a treatment for the elusive Alzheimer’s disease may be – a blend of protein factors.

What is the secret in the plasma that this company has tapped into? What combinations of which components, in which proportions, can slow the buildup of amyloid beta and tau tangles in a human brain to the point of noticeably affecting cognition, at least in the short term?

If the approach, a curious combo of the old and new, continues to work, maybe one day we’ll find out. And maybe more than one recipe will work, like this Indian chickpea recipe. The chronokine soups are an exciting new start in a frustrating field.