Expensive CAR-T therapy raises difficult question: ‘What is the price of a human life?’

This article or excerpt is included in the GLP’s daily curated selection of ideologically diverse news, opinion and analysis of biotechnology innovation.
Alternative medicine, with its universal boogeymen and safe panaceas, gives us a simplistic (and wrong) view of the world. Medicine, on the other hand, often demands that we make tough choices. Chemotherapy may kill cancer cells but it also kills any rapidly dividing cell, which means hair loss and nausea. A new type of intervention for cancer was approved by Health Canada a year ago and is now being covered by the Quebec public drug plan. The intervention is called CAR-T therapy, and while its scientific ingenuity is marvelous, it has raised the age-old question: what is the price of a human life?

Reprogramming the immune system at the genetic level

There is something of the Greek chimera in CAR-T therapy: indeed, its cryptic name (which has nothing to do with Ford’s Model T car) stands for “chimeric antigen receptor T-cell therapy”. The mythological chimera, we may remember from our childhood, was a monster that looked like a lion with the mid-section of a goat and a snake or dragon where the tail should be. I don’t think Homer, who described the beast in his Iliad, could have imagined a similar process happening with molecules.

Here’s a fictional example of how CAR-T therapy works. Luke is 12 years old and he has a specific type of leukemia. Some of his white blood cells have mutations that make them divide too often, crowding out other cells in his bone marrow. His cancer has unfortunately not responded well to traditional medical treatments and he’s eligible for CAR-T. So Luke lies down in bed or sits reclining in a chair for two to three hours as his blood goes through a machine before flowing back into his body. What the machine does is remove a type of white blood cell called a “T cell”. T cells should be able to recognize cancerous cells as the enemy but they often can’t. CAR-T will change that. 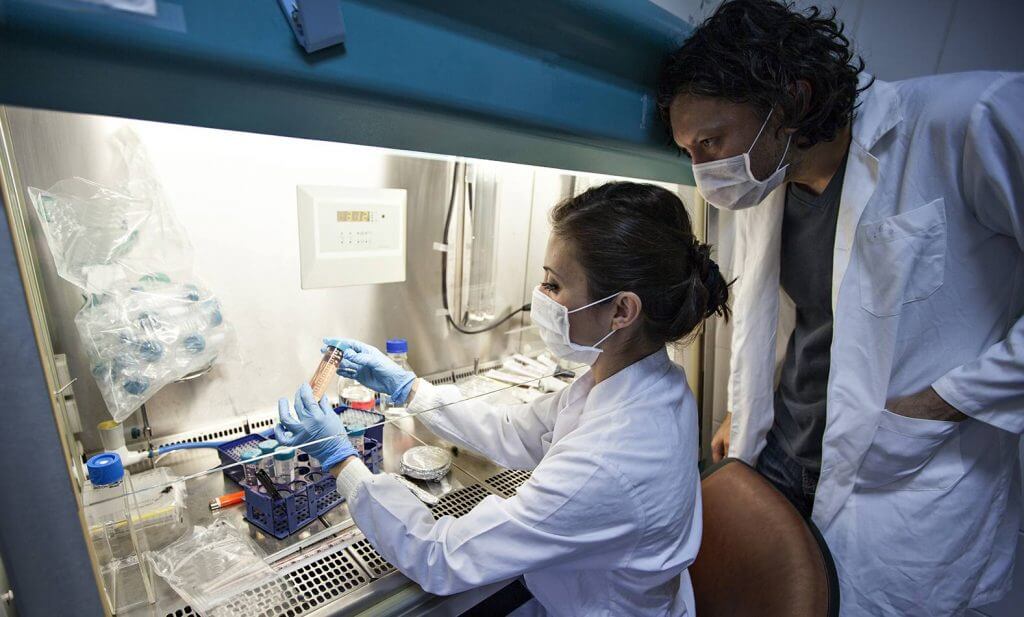 Luke’s T cells are sent to a laboratory and that’s where the chimera rears its head. You see, you can think of a T cell as a sphere with an array of arms and hands sticking out. Some of the hands have five fingers, some have two, some look like tentacles. When the T cell snuggles next to an unknown cell, its hands try to shake those of the other cell. If the hands are compatible, that’s a signal of recognition. Luke’s leukemia cells have a hand at their surface called CD19 and his T cells need to have compatible hands to shake it and recognize it as cancer but they often don’t. And that’s what scientists fix in the lab. They don’t manually implant little hands on the surface of Luke’s cells; instead, they make a tiny change to their DNA. You see, those varied hands are made by the T cells based on instructions from their DNA. If you change the instruction, a different hand will be made. Scientists use a neutered virus to deliver the modified gene inside the T cells, and the gene starts to make CD19 hands. The reference to the mythological chimera arises because the arm itself hasn’t changed, but it is now fused to a completely different hand: this appendage at the surface the cell is a chimera. Luke’s modified T cells are grown in the lab to make sure there are enough of them and they are then infused back inside his body. With their new hands, they move through his blood, shaking hands with strange cells, recognizing them as cancer cells, and calling for lethal reinforcement.

Hype is inescapable with a new technology, and CAR-T is indeed being referred to as “ground-breaking” and “revolutionary” in local news coverage. In the sense that nothing like it has ever made it to the clinic, these adjectives are correct, but it is important to point out that CAR-T therapy is not a cure-all. The specific CAR-T intervention that has been approved in Canada, Kymriah, targets a very small subset of cancer patients: children, teenagers, and young adults with a type of leukemia called B-cell ALL and adults with a type of lymphoma called DLBCL. For both categories of patients, the cancer usually needs to be resistant to other treatments or to be a relapse.

CAR-T works well with these “liquid tumors” because the individual cancer cells need to be accessible to the patient’s modified T cells. They need to find each other and shake hands. Scientists have experimented with CAR-T therapy for solid tumors (i.e. brain cancer, colorectal cancer, breast cancer, and many more), observing flickers of response and the occasional disappearance of a tumor, but these early promising signs are usually followed by relapse and death. Solid tumours make for particularly difficult targets because of their acidic, oxygen-deprived and immunosuppressive environments.

Related article:  How our bodies protect cancer and why this could be key to better chemotherapy treatments

But even for patients with liquid tumors who are eligible for CAR-T therapy, the intervention, though beneficial, is not a magic bullet. The percentage of patients who undergo remission from cancer following CAR-T therapy varies from study to study and is between 50 and 83%, though there are no studies that follow up for more than a few of years. It’s still much better than a death sentence but it also comes at a physical price: nearly all patients on the therapy experience a side effect known as “cytokine release syndrome”. It occurs within ten days after the beginning of treatment and can consist in fever, muscle aches, nausea, fatigue, even heart and kidney problems, liver failure, and sometimes death. Hospitals administering CAR-T are told they must have a specific drug on site to deal with this side effect, and most patients do indeed recover. Other side effects can include delirium, difficulty speaking, and seizures. And then, there’s the price tag.

How much are we willing to pay to survive disease?

Recent media coverage highlighted the fact that the Quebec government will be spending 35 million dollars a year to pay for this therapy, which is expected to be administered to 60 adults and 10 children annually. This brings up the direct cost of CAR-T to half a million dollars per patient, which is in line with the USD 475,000 price tag I have seen elsewhere. But CAR-T is not a pill you pop at home; it is a procedure that requires hospitalization for several weeks and the management of a severe side effect that, itself, necessitates an expensive drug, so the final bill will definitely swell in size. This leads to complicated negotiations between the pharmaceutical companies that have invested in the development of these cutting-edge technologies (and all the other ones that have failed and will never bring in a cent) and governments with limited budgets.

Kymriah is the first CAR-T therapy to be approved in Canada but already Health Canada is studying another application (for Yescarta) and close to 800 clinical trials have been registered for CAR-T therapy, so discussions over the financial impact of these new interventions are probably just beginning.

CAR-T therapy is scientifically inspired but it is far from perfect. And it comes with a massive price tag. There are days when the thought of an herbal tea curing cancer is positively bewitching. Alas, we live in a world that requires the careful evaluation of risks and benefits. At the end of the day, stakeholders must answer the question: how much are we willing to pay to survive disease?

Take-home message:
– CAR-T therapy is an intervention that changes the DNA of a type of white blood cell so that it will better recognize and destroy cancer cells
– The first type of CAR-T therapy, called Kymriah, has been approved by Health Canada and will now be reimbursed by Quebec’s drug plan
-The approval is for very specific patients who have particular blood cancers that have not responded to treatment or that came back after a successful course of treatment
-CAR-T therapy is currently priced at roughly half a million dollars per patient and almost all patients experience severe side effects which require another medication to treat

Jonathan Jarry is a biological scientist. His passion for critical science communication has resulted in a nascent blogging and podcasting career, most notably with Dr. Christopher Labos on The Body of Evidence, a website that takes a skeptical eye at health claims. Follow him on Twitter @crackedscience

A version of this article was originally published on McGill University’s website as “The Costly Reprogramming of the Immune System to Fight off Cancer” and has been republished here with permission.