This article or excerpt is included in the GLP’s daily curated selection of ideologically diverse news, opinion and analysis of biotechnology innovation.
A recent story in the Guardian titled “The Age of Extinction: Bees; ‘Like Sending Bees to War’: the Deadly Truth Behind Your Almond Milk Obsession,” alleges that almond growers are somehow uniquely responsible for substantial losses of honeybee hives, and that may eventually lead to their extinction. The article gets a large number of facts wrong, but the story really isn’t about almond farms or even honeybees. It’s about the author’s wrongheaded belief that high-yield farming is bad for the environment. Ironically, the author’s implied “solution” would actually wreak havoc on the environment.

The Guardian article contains so many scientifically faulty claims that one could write a book debunking each one, but in this post we will address the bigger point as detailed in this excerpt:

Beekeepers attributed the high mortality rate to pesticide exposure, diseases from parasites and habitat loss. However, environmentalists and organic beekeepers maintain that the real culprit is something more systemic: America’s reliance on industrial agriculture methods, especially those used by the almond industry, which demands a large-scale mechanization of one of nature’s most delicate natural processes. … Environmentalists argue a better solution is to transform the way large-scale agriculture is carried out in the U.S.

The author seems to believe that modern, high-yield farming—which uses technologies that range from agrochemicals to tractors to genetic modification—threatens the existence of wildlife, and in this case, honeybees. The author blames almonds in this piece, but tomorrow it will be something else. Indeed, if people stopped eating almonds, high-yield farming would continue because farmers need technologies to ensure they can produce enough food to feed the world. 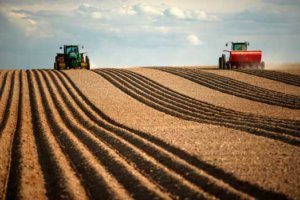 The Guardian article doesn’t directly detail a “solution” other than to hint that switching to small organic farms would be more environmentally sustainable. But such pie-in-the-sky ideas are easy to assert when you don’t have to actually do the farming. Most farmers likely understand that, if left to her own devices, Mother Nature serves up leaf-and-fruit-chewing insects, deadly plant viruses (often transmitted -by insects/bugs), rot-inducing fungal diseases, and destructive bacteria (often transmitted by insects/bugs)—all of which can quickly destroy a large percentage of crops. And without herbicides to kill weeds, farmers will may have to till the soils more often, increasing soil erosion and water pollution that runs off to nearby waterways.

Indeed, without modern tools that are part and parcel to high-yield agriculture, crop damage would substantially reduce the amount of food produced per acre. The Guardian story itself highlights an organic almond farmer who, while bragging that his 20-acre farm is chemical free, admits that his yields are lower than other almond growers.

High-yield farming produces more food per acre by deploying technologies such as agrochemicals, genetic modification of plants, and mechanization. Without these tools, there would not only be less food for humans, there would be less available for wildlife—including less habitat for honeybees, native bees, butterflies, and other pollinators.

Had technology—and therefore yields—been frozen at 1961 levels, then producing as much food as was actually produced in 1998 would have required more than a doubling of land devoted to agriculture. Such land would have increased from 12.2 billion acres to at least 26.3 billion acres, that is, from 38 to 82 percent of global land area. (And this optimistically assumes that productivity in the added acreage would be as high as in the other areas). Cropland alone would have had to more than double, from 3.7 to 7.9 billion acres. An additional area the size of South America minus Chile would have to be plowed under.

Goklany’s calculations show that if farmers eschewed high-yield agriculture, adverse environmental impacts would be severe. “Massive deforestation, soil erosion, greenhouse gas emissions and losses of biodiversity would occur with the more-than-doubling of land and water diverted to agriculture, but hunger and starvation would not decline,” explains Goklany.

To have raised all U.S. crops as organic in 2014 would have required farming of one hundred nine million more acres of land. That is an area equivalent to all the parkland and wildland areas in the lower 48 states or 1.8 times as much as all the urban land in the nation. As of 2014 the reported acreage of organic cropland only represented 0.44 percent of the total, but if organic were to expand significantly, its lower land-use-efficiency would become problematic. This is one of several reasons to question the assertion that organic farming is better for the environment.

Greens and many journalists completely ignore these realities when making claims that high-yield farming, and pesticides in particular, threaten to make honeybees extinct. In reality, it’s their policies that would threaten wildlife.

Moreover, there’s no reason to believe that honey bees are anywhere near going extinct. In fact, the number of honeybees and hives are up all around the world in good measure because they are part of high-yield agriculture. As the Guardian article notes, they are basically considered livestock, and they exist in the United States because they have economic value for pollination services and honey production.

Related article:  GM crops could help to solve the problem of over-fishing

Still, domestic honeybees make up the bulk of honeybee hives in the nation. About 60 percent of honey in the United States is produced by large commercial beekeeping operations—those with more than 300 colonies. These large operations also charge fees for pollination services, trucking bees for farms around the nation, which is a key reason for keeping bees.

If we no longer needed these honeybees to pollinate almonds, or whatever else, beekeepers would have far less incentive to keep hives. And since 85 percent of commercial honeybees eventually serve almond groves, beekeepers might have to cut their number of hives substantially—reducing honeybee populations—if we all stopped eating almonds. 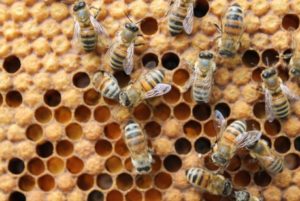 So anyone interested in maintaining the population of domestic honeybees should be happy to eat almonds and drink almond milk, and they most certainly should support high-yield agriculture. In fact, because of their economic value in honey and pollination services, the number of honeybee hives in the world have hit record highs. As journalist Jon Entine points out, since 1961, their numbers have increased 45 percent.

That said, these domestic honeybees face some serious challenges—largely related to disease transmission—which is something beekeepers, as well as a legion of academic researchers, are working to address. Just as cattlemen must take care of their cows, beekeepers, too, have to manage health and nutrition of their hives. While diseases are the main problem, researchers have noted that additional stressors may make it harder for bees to fight diseases. Stressors they have identified include dietary deficiencies, stresses associated with transporting hives from one farm to another, and traces of pesticides.

Although greens and journalists often list pesticides at the top of their lists of potential stresses they are, overall, a minor issue compared to other things, and their impacts can be managed. Moreover, researchers have not been able to establish any association between pesticide use and the loss of honeybee hives.

Ironically, domestic honeybees’ main exposure to pesticides are products that beekeepers use inside the hive in an attempt to control tiny pests known as Varroa destructor mites—a major cause of hive loss. Unfortunately, there is a limited number of pesticides available to treat hives and kill the mites, as the mites are growing resistant. In fact, a quote in another Guardian article on the topic hits on this point:

“We are increasingly concerned about varroa mites and the viruses they spread,” said Dennis vanEngelsdorp, an entomologist at the University of Maryland and president of the Bee Informed Partnership.

VanEngelsdorp said that the products used by beekeepers to remove the mites seemed to be becoming less effective.

“The products” vanEngelsdorp refers to here are pesticide products. Resistance can become a severe problem when there are few new products on the market. Unfortunately, federal regulations are so stringent that it’s not profitable enough to produce “minor use” pesticides—products that would serve relatively small markets.

However, other efforts are underway to help domestic honeybees, including efforts to breed mite-resistant honeybees. The Genetic Literacy Project recently published an interesting article on this topic that’s worth checking out.

Commercial beekeepers certainly do have their challenges, but that shouldn’t be confused with how bees are doing in the wild, nor should it be an excuse to demonize useful agro-technologies and make claims about pesticides that are out of line with reality. At the end of the day, not only do world populations depend on high-yield agriculture, so do the bees, butterflies, and other wildlife. These technologies mean we can make more food for humans on a modest amount of farmland, while leaving a good deal of habitat available to wildlife.

Angela Logomasini is a senior fellow at the Competitive Enterprise Institute (CEI). She specializes in environmental risk and regulation. Her work has appeared in Forbes, The Huffington Post, New York Post and The Wall Street Journal. Follow CEI on Twitter @ceidotorg

A version of this article was originally published at CEI and has been republished here with permission.