This article or excerpt is included in the GLP’s daily curated selection of ideologically diverse news, opinion and analysis of biotechnology innovation.
As Brazilian farmer and attorney Henrique Gustavo Fiorese sees it, the future of agriculture depends on technology and sustainability.Though either concept can be adopted independently, they are increasingly intertwined in modern agriculture, he said, pointing to genetically modified crops that allow farmers like him to reduce their use of chemical pesticides and water-saving apps that identify exactly when crops need irrigation and how much.Fiorese, who farms with his brother and father in Brasilia, has seen for himself the value of protecting wild nature and employing sustainable practices. They cultivate soybeans, corn, wheat and field beans — a brown bean that is a dietary staple in Brazil — on 2,800 hectares, while leaving 1,200 hectares of native rainforest untouched.

Though Brazilian law mandates farmers to preserve native forest, Fiorese and his family protect far more than the 560 hectares prescribed by law. They also have voluntarily erected fences around the preserve to keep out cattle and deter humans from hunting and fishing. They’ve taken these measures because they recognize both the intrinsic and practical value of protecting the rainforest, which is a critical watershed.

“It has huge trees and rivers that are born there,” he explained. “Most of the water used on our farm is borrowed from this area. We’re responsible for it.  We are protecting it for future generations. We can see that preserving not just the forest, but the soil we plant every year, if you do both at the same time it can increase production. And we get to live with native animals and insects that help us, like the pollinators.”

The Fioreses, who have a partnership with Bayer, implemented one of the company’s “bee care” projects to learn more about pollinators and catalog the species that live on their farm. As part of that project, university researchers conducting insect surveys in their fields recently discovered an entirely new species of native bee.

“It was a surprise,” he said, noting with pride that his family will get to name the new species. “Before we started this, we didn’t know much about bees, only that some produce honey and they are essential to pollination. We didn’t realize the importance of all the pollinators. Now we take more care.”

They’ve even planted a seasonal garden that will supply bees with nectar and pollen, and the farm with honey, as well as herbs and vegetables. “It’s a new project for us,” he said. “Maybe, if it goes well, we’ll have honey to sell. And we’ll have pollinators for the soy and field beans.” 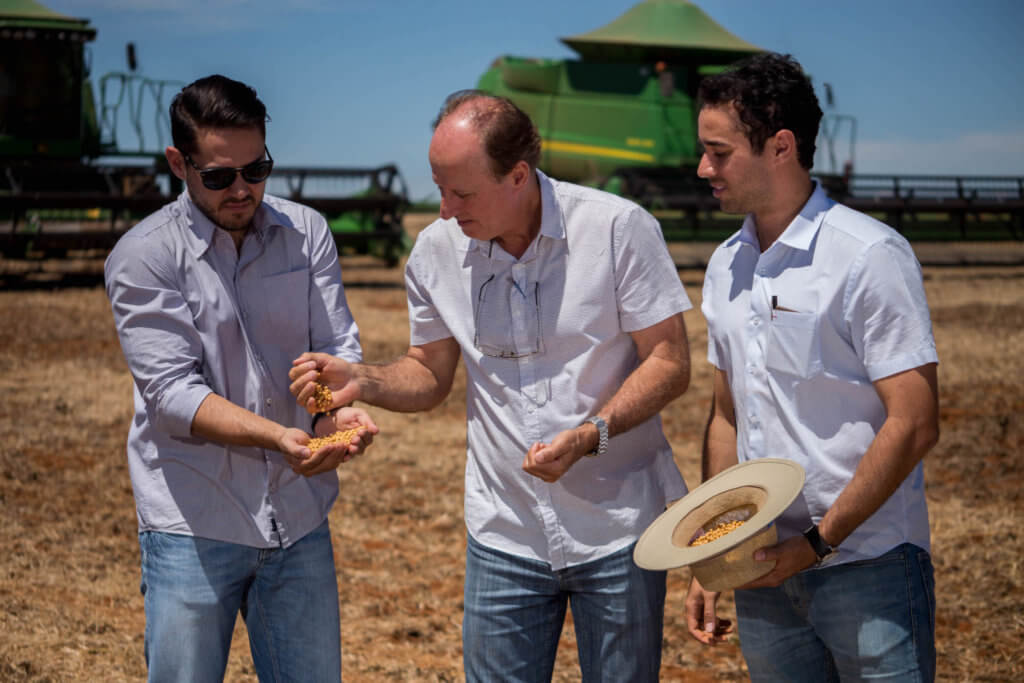 Because the farm depends on water from the preserve for crop irrigation, the Fiorese family treats it as a precious resource that must be managed with care. “We have apps that monitor our water use and tell us exactly how much water the plants need and when they need it,” he explained.

They also use apps to monitor insect pest populations so they know precisely when and where they need to spray pesticides, and how much to use. “We go just to the places that need spraying, so we save water, diesel [fuel] and the time as well,” Fiorese said.

Transgenic, or genetically modified (GM), crops play another important role in the farm’s sustainability practices. Fiorese said he, his brother and his father were unanimous in their decision to grow GM crops, for several reasons. “You spray less, you use less chemicals and water, it’s easier on the machines, it reduces our costs and it is helping us to improve our production, just from the technology in the seeds,” he explained. “And it’s getting better every year.”

The higher yields allow them to produce more on the same amount of land, so they don’t need to open up new areas for cultivation, thus protecting wild lands, he said. “It’s a great advantage for everybody. I don’t see any studies that say the opposite or anything that proves it’s harmful. I cannot see why some people cannot use this technology or why some countries don’t allow it.”

The family eats what it produces every day, Fiorese noted, “so for me, it’s [GM] not a thing I consider in any way bad.”

They will grow conventional crops if they have a contract for those commodities, he said, but “this year, it’s all transgenics. It’s instrumental here to good yields. It’s very widespread.”

Most Brazilian farmers, especially those who plan to have their families continue the operation, are embracing the use of technology, he said. “In the future, everybody will be doing it this way. I don’t see farming continuing without it.”

He thinks it’s important for those who oppose GM technology to see “the reality of farming in Brazil or Africa. We don’t have winter, so it’s a really good environment for the plagues and insects to develop. If we didn’t have some technology, and not just chemicals, to prevent that it would be a disaster to plant. It’s essential to make agriculture viable. We wouldn’t produce anything without this technology.”

Fiorese said that Brazilians have largely accepted GM technology because “most of our economy is based on farming and producing food. So it’s really fundamental to our economy to have that technology. There is some opposition, but most people understand the importance of transgenics.”

As an attorney, Fiorese provides legal representation to the Brazilian Association of Grain Producers and also handles all the contracts, finances and paperwork required to keep the farm running. He enjoys putting his legal skills to use on the farm that his grandparents started after they emigrated from Italy to Brasilia, and where he spent his school holidays while growing up.

“I don’t see myself doing anything different,” Fiorese said, noting that he enjoys the variety of doing different things each day. “At the beginning I was really challenged, but I also really liked it.”

While it can be difficult at times working with family, “it’s also an opportunity,” he said. “It’s really good to see the seeds that you planted are growing with the family. When you’re working with something that started with your grandparents, and that now I’m helping to grow, step by step, it’s really rewarding.”