Agnès Ricroch | April 8, 2020
This article or excerpt is included in the GLP’s daily curated selection of ideologically diverse news, opinion and analysis of biotechnology innovation.

The groundbreaking documentary Food Evolution offered the general public a science-based introduction to crop biotechnology, debunking some of the more pernicious myths about GMOs along the way. The filmmakers made a valiant effort that will benefit any moviegoer with an open mind. But after recently watching the film and attending a debate immediately following the screening between the French National Federation of Organic Farming (FNAB) and several experts on GMO and gene-edited plants, it was clear to me that many organic food advocates and large swaths of the general public still accept a lot of blatant untruths about biotechnology and its impacts on food safety and environmental sustainability.

New technologies almost always incite some consternation, that deep-seated propensity to fear what we don’t understand. That’s not what we’re dealing with in crop biotechnology, however. These anti-GMO falsehoods originated more than twenty years ago, and the evidence has conclusively refuted them. Yet, they are still promoted by people who do not want to recognize what scientists have discovered about genetic engineering.

Returning to the aforementioned debate, here are six anti-biotech arguments that are still used to mislead consumers about GMOs, and need to be regularly refuted until they lose sway with the general public.

Both representatives of the FNAB stressed that GMO crops are ‘unnatural,’ an argument that plays on the public’s fear that their food is filled with so-called ‘foreign’ DNA. But this argument is easily refuted because it ignores horizontal gene transfer between living beings, a process by which different species naturally exchange DNA for the evolutionary benefit of both organisms. Ironically, the Non-GMO Project monarch butterfly in the USA is a textbook example.

Two major publications have demonstrated this phenomenon in action, notably in sweet potatoes  and in 49 other plant species including yam and banana, which are naturally transgenic organisms—even the organic varieties. In-vitro (outside of a living organism) transgenesis in the laboratory is carried out with the help of Agrobacterium, a soil bacterium, which leads to the formation of collar galls or hair roots due to the expression of the transferred T-DNA genes. Spontaneous regeneration of transformed cells can produce natural transformants carrying cellular T-DNA sequences of bacterial origin.

In the above-mentioned studies, researchers looked for T-DNA-like genes in sequenced genomes of plants and discovered that these genes are remarkably widespread in nature. This natural gene transfer when carried out in-vitro by Agrobacterium leads many countries, including those belonging to the European Union, to regulate a food crop as a GMO, though there is effectively no difference between a lab-made transgenic plant and one produced by Mother Nature.

The question of the patenting living things, also raised by the two FNAB representatives, is equally worrying. In the European Union, no crop variety can be patented, only inventions are afforded that protection. For example, a genetic construction is patentable. The patentability of genetic constructs is thus encouraged by the French research institutes such as INRA, CNRS, etc., which earn royalties. But the patent does not privatize knowledge. On the contrary, the inventor has the obligation to describe their invention and thus make the result of their investigations public, but its use requires the agreement of the patent owner.

The plant variety protection system differs from the patent system in that it allows protected varieties to be used for experimentation and for breeding in order to create new ones, without the need for the owner’s agreement. This helps to prevent possible monopoly situations and, above all, the slowing of breeding innovation, by allowing access to genetic diversity for the creation of new varieties.

Breeders, creators of new plant varieties, can protect their work on the basis of global guidelines issued by the UPOV, the International Union for the Protection of New Varieties of Plants. This protection is attested by a property title called “Plant Variety Certificate” or PVP. It prohibits anyone from producing and marketing seeds of the variety without the express consent of the owner. But on the national level, there is still a large degree of flexibility.

In France, for example, a law enacted in December 2011 and the application decree passed on August 3, 2014 authorize the practice of seed saving for 34 species including: oats, barley, rice, rye, triticale, wheat, durum wheat, potato, rapeseed, oilseed flax, chickpeas, yellow lupin, alfalfa, field peas, faba beans, soybeans, white mustard, protein peas, lentils and beans. This authorization is subject to equitable compensation to the breeder who created the new variety. And of course it is always legal to produce farm-saved seeds of varieties not protected by a PVP, whatever the species.

During the debate, the French National Federation of Organic Farming endorsed Gilles-Éric Séralini’s retracted 2012 study. Recall that the alarmist paper suggested consumption of glyphosate-resistant GMO corn led to monstrous tumors in rats, without showing photos of the control rats (which also likely developed the same tumours).

Journalists who wanted to receive an advanced copy of the study were prohibited from contacting independent researchers for comment before Séralini held a press conference announcing the results. The research triggered a wave of media coverage, political reactions and an enormous backlash from scientists. The publication was discredited by numerous food safety agencies, withdrawn from the journal that originally published it, and finally refuted by scientific studies financed by French and European public subsidies.

“Pollution” caused by GMO pollen is a fiction

Another common refrain in the organic community is that farmers are afraid of ‘pollution’ from GMOs, particularly canola. However, there is no transgenic variety of the crop in France, and the only trials at INRA in Rennes to measure gene flow to species such as cabbage have been vandalized by activists. This is not a uniquely French phenomenon, sadly.

Related article:  Why the USDA is finding it hard to combat surge in fraudulent organic products

In fact, more than 70 acts of vandalism against public research experiments on GMO plants were recorded in 2012 in Germany, the United Kingdom, France and Switzerland. Most were field trials to test the biosafety of GMOs, and in some cases destruction was accompanied by other damage to property, threats or violence against people. With no more GMO crops to destroy in France, anti-GMO activists have found a new enemy: “hidden GMOs”, crops developed through mutagenesis.

On the subject of gene flow, the FNAB representatives also failed to mention that this question has been asked since the 1950s, long before the advent of GMO crops, and that solutions exist: flowering delay and geographical distance. For example, multiplication of a corn line is carried out in an isolated plot; the distance between this plot and any other maize field of another variety must be at least 400 meters, and a maximum of 0.1%  impurity is tolerated.

Critics often assert that long-term and multi-generation toxicity tests on animals are necessary to confirm the safety of GMO crops. The two FNAB representatives requested the same tests for crops derived from conventional breeding techniques such as mutagenesis, and from NBTs such as CRISPR. They want mandatory labeling for these products (as they do GMOs), even if these tests are superfluous and very expensive, which means only large seed companies can afford to finance them.

These tests do not reveal any health problems related to the long-term consumption of food derived from GMOs, are absolutely unnecessary and are, in fact, not required in many countries.  One may wonder why products from organic farming would not be subject to the same risk assessments as products from transgenesis or NBTs to ensure labeling, since some organic products come from random mutagenesis or in- vitro crossing techniques, and therefore from biotechnologies used in plant breeding.

All plants can be attacked by pathogens 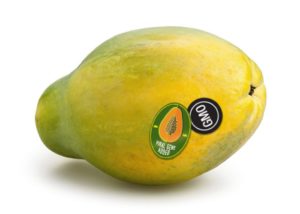 The two FNAB reps rounded out their debate presentation with an attack on arguably the biggest biotech crop success story: the GMO papaya. They claimed the ringspot virus that had decimated Hawaii’s papaya industry for decades was caused by plantations that were extended over very large areas. In reality, the virus also spreads in micro plots, such as those in greenhouses. A GMO papaya, the Rainbow variety, immune to the pathogen quite literally saved the industry in 1998.

A more recent example in tomatoes sadly demonstrates what happens when there is no genetic solution available to counter deadly plant diseases.  An emerging pathogen, Tomato Brown Rugose Fruit Virus (ToBRFV), which can cause up to 100% losses, was officially detected in France in February 2020, in a greenhouse in Brittany, and first identified in Israel in 2014.

According to observations, the incidence of the disease in affected areas varies from 10% to 100% of affected fruits, resulting in severe yield losses for farmers, but all actors in the sector (seed companies, nurseries, producers and also private individuals) are threatened by this pathogen.

The virus can also infect other species of the Solanaceae family such as pepper or petunias.  Infected seeds, plants and fruit, which are likely to carry the virus over long distances especially during trade, provide particularly effective means of spreading the pathogen. In a production area, the virus is spread by direct contact between plants, by  hand and any inert or biological media that have been in contact with an infected plant: work tools, clothing, pollinating insects, birds, irrigation and water. No treatment and no resistant variety exists today against ToBRFV.

When the representatives of the French National Federation of Organic Farming were asked why GMOs were banned from organic agriculture, when there is nothing inherently dangerous about genetic engineering, they answered that it is in their ‘directive’, their body of doctrine, not to allow transgenesis. In other words, it is ideology that leads them to prohibit transgenesis and all NBTs. But even on this fundamental point they aren’t consistent. Organic farmers still cultivate varieties of barley and rice from the Camargue region of France that are derived from biotechnologies.

It is debatable whether FNAB are ignorant or blinded by their ideology, believing their untruths or utilizing a strategy based on fear and the normative concept of “nature” to make consumers pay more for identical products. Food Evolution clearly showed that many organic  advocates do not respect the evidence. After watching this debate, it’s clear to see that the filmmakers weren’t embellishing the truth.

Dr. Agnes E. Ricroch is a member of the French Academy of Agriculture and an associate professor of genetics and plant breeding at AgroParisTech and Paris Saclay University, and adjunct professor at Pennsylvania State University.

A French version of this story was published at the European Scientist.