Where are GMO crops and animals approved and banned? 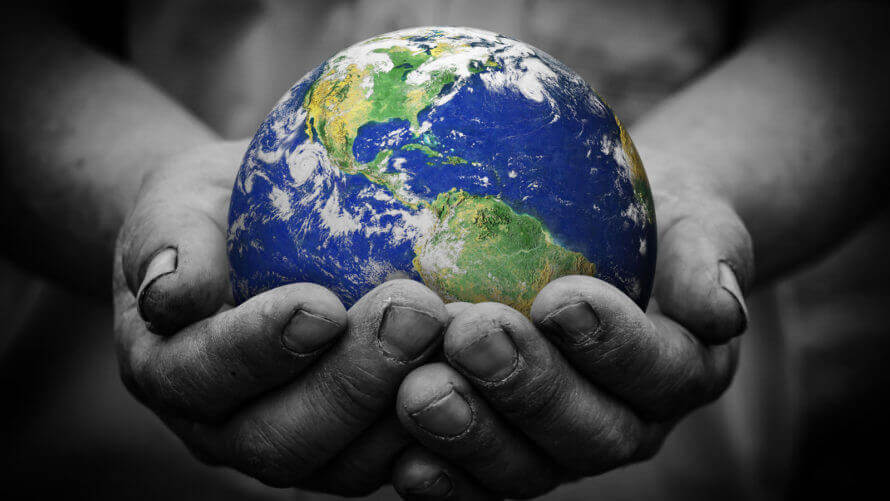 [H]ypocrisy rules: Europe imports over 30 million tons per year of corn and soy-based animal feeds, the vast majority of which are genetically modified, for its livestock industry.
—Mark Lynas, political director for the Cornell Alliance for Science
If the Americans like to eat GMO products, let them eat it then. We don't need to do that; we have enough space and opportunities to produce organic food.
—Dmitry Medvedev, prime minister of Russia

Genetically modified crops are currently grown in 26 nations around the world, while dozens ban farmers from planting GMO crops. Countries that ban GMOs received considerable attention in 2015, when a majority of European Union nations decided to block the cultivation of new GMO crops within their borders, and Russia issued a ban on both cultivation and imports.

But most of the nations that prohibit GMO cultivation still allow GMO products — particularly animal feed — to be imported. European countries, for example, import 30 million tons of GMO grain annually. Many other nations — China, Japan and Canada for example — restrict GMO products, but only until they pass regulatory standards.

The most recent data from the International Service for the Acquisition of Agri-biotech Applications shows that more than 18 million farmers in 26 countries including 19 developing nations planted over 185 million hectares (457 million acres) of GMO crops in 2016. This represents a 3 percent increase over 2015, and the highest area of biotech crop adoption since cultivation began in 1996.

On the flipside, there are dozens of nations that prohibit the cultivation of GMO crops, though estimates vary. For example, a 2013 article in the Nation states that 26 countries had total or partial bans on GMOs, “including Switzerland, Australia, Austria, China, India, France, Germany, Hungary, Luxembourg, Greece, Bulgaria, Poland, Italy, Mexico and Russia,” and that “significant restrictions on GMOs exist in about sixty other countries.” In 2015, anti-GMO group Sustainable Pulse said that 38 countries ban the cultivation of GMO crops. The group’s list includes Algeria and Madagascar in Africa; Turkey, Kyrgyzstan, Bhutan, and Saudi Arabia in Asia; Belize, Peru, Ecuador, and Venezuela in South and Central America; and 28 countries in Europe. 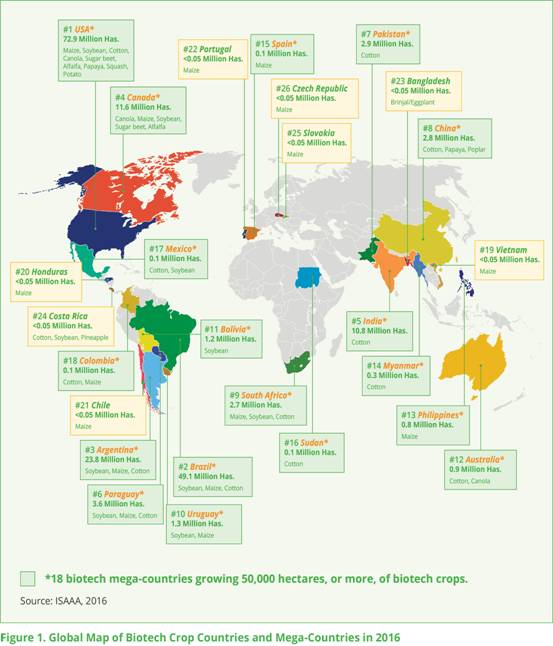 EU regulations give individual countries the right to block farmers from growing GMO crops. Using this opt-out process, 19 members, including Germany and France, voted in late 2015 to prohibit the cultivation of eight new biotech crops awaiting approval from regulators. They also chose to prohibit cultivation of the one GMO crop — an insect-resistant corn variety (MON810) — already approved for cultivation in the EU It is mostly grown in Spain and Portugal. These nations’ opt-out letters can be found here.

Although many EU countries do not grow GMOs, Europe is one of the world’s biggest consumers of them. Every EU nation imports them. More than 30 million tons of biotech corn and soy for livestock feed are imported each year, making Europe the largest regional consumer of GMOs in the world. 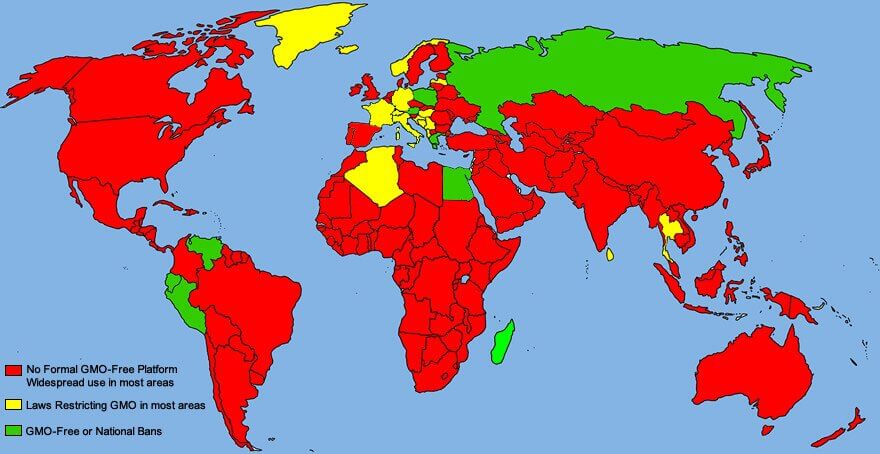 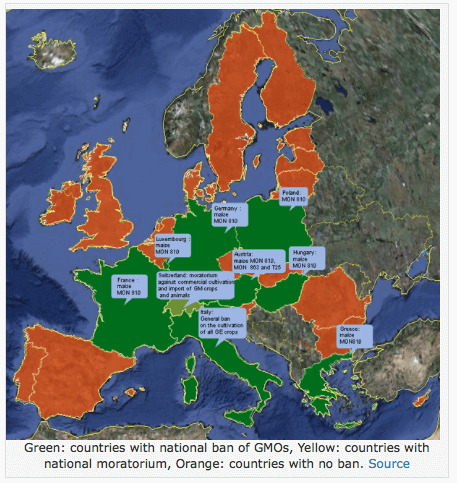 When nations ban the importation or cultivation of GMO products, such moves are generally driven not by science, as the independent science organizations in every major country have come out with public statements that GM products are safe. Other factors are trade protectionism, pressure from activists, public uneasiness or a desire to protect a country’s image such as the French belief that genetic crops could “contaminate” the country’s reputation as a world food capital. As is often the case with GMOs, the situation in the European Union suggests how divisive and political this issue has become. The EU has witnessed numerous skirmishes between scientists and politically-based opposition. Scottish leaders, for example, admitted that their decision to opt out of GMO cultivation was based on marketing concerns, rather than science. And when the European Commission’s science adviser, Anne Glover, spoke in favor of the science of genetic engineering, she found herself out of a job following intense lobbying by opposition groups. Bans almost always run counter to the advice of scientists and agricultural experts in the nations where they are implemented.