What are CRISPR and other New Breeding Techniques (NBTs)? 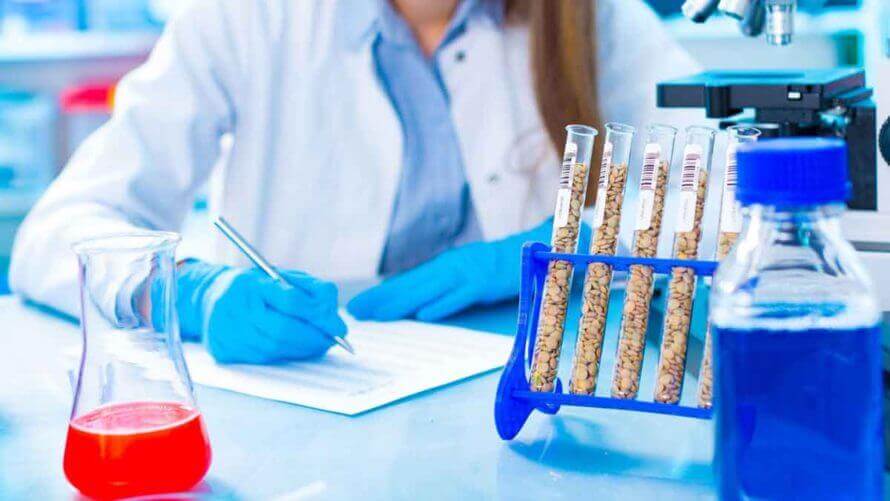 Anyone who works in any kind of plant engineering is vigorously pursuing these technologies, especially with crops that have complex genomes or that you can't breed easily.

Just as 'traditional' genetic engineering, gene editing techniques can induce unintended changes in genetic material even if only one or a few base pairs have been altered.

New breeding techniques (NBTs) are new methods of genetic engineering that give scientists the ability to more precisely genetically modify crops and animals. Using NBTs, researchers can enhance or silence or insert or remove desired traits. Scientists usually move genes from within species (although there are a few transgenic examples of NBTs), bypassing a common argument against first generation genetic engineering (GMOs), which required crossing the “species barrier” through the transfer of genes from bacteria and other plant species. NBTs also allow researchers to more precisely and quickly insert desired traits from within species than traditional breeding, which is one reason why regulators look at them as a faster version of conventional breeding techniques. Due to these differences with GMOs, plants bred with these techniques have so far faced lower regulatory hurdles than “transgenic” products, although the regulatory landscape is unsettled.

Researchers have used NBTs to engineer products that sailed through the regulatory system, such as the non-browning Arctic Apple and bruise and disease-resistant Simplot potato varieties developed using gene silencing. There are hundreds of CRISPR crops in development with dozens of useful traits but only one approved product in the US a non-browning mushroom. Despite the fact that NBTs almost never involve transgenics, which had been central complaint of anti-GMO critics, biotechnology skeptics and advocacy groups almost universally have declared their extreme skepticism of NBTs. They refer to CRISPR and other gene editing techniques, and even gene silencing, as “extreme engineering”, and advocate for them to be regulated as transgenic crops are currently.

One of the more revolutionary developments in the realm of genetic engineering has been the introduction of several newer techniques with the potential to change how scientists guide the breeding of plants and animals, and further research on human development and diseases. They could also radically modify how governments define and regulate genetic engineering on humans and in agriculture.

Until recently, most genetic engineering relied on transgenic techniques, with modifications made through the addition of genetic material from different species. These modifications led to a range of products, including crops resistant to destructive insects (Bt crops) and herbicides (glyphosate, dicamba). But the regulatory process for traditional GMOs is arduous, taking seven to 13 years and more than one hundred million dollars.

Anti-biotechnology activists have labeled these crops Frankenfoods because they were often created by moving so-called “foreign genes” from one species to another. “Plants and organisms unable to physically reproduce can become unnaturally intertwined,” read a typical NGO posting, headlined “Frankenfood=Genetically Modified Food”. “A novel gene may be cobbled together from a plant virus, a soil bacterium and a petunia plant, for example creating a kind of botanical Frankenstein,” reads another.

In contrast, few NBTs use transgenics and most new products can be developed in a fraction of the time and cost of conventional or transgenic breeding. There is no finite set of NBTs and future techniques may be put under the same umbrella term, “New Breeding Techniques.” There are currently seven broad, scientific categories of NBTs. Most popular in agricultural biotechnology are gene editing CRISPR systems and TALENs and other NBTs, including RNA interference (RNAi) and epigenetic techniques and sprays:

Gene or Genome Editing is a broad category that includes several techniques allowing scientists to do precise editing, including CRISPR. There are three gene editing NBTs:

CRISPR-Cas9 (Clustered Regulatory Interspaced Short Palindromic Repeats) is the newest and most powerful of the gene-editing techniques. It is a natural bacterial defense system that scientists have “programmed” to target and edit DNA at precise locations. It offers researchers a relatively inexpensive, easy and quick option to engineer changes. CRISPR is akin to a “biological word processing” system or molecular scissors that allows scientists to snip away weaknesses or insert strengths already found in the species being developed. Researchers cut out a section of DNA. Then, one of two things happens: The loose ends are essentially glued back together, eliminating the undesired trait or weakness. Or a “repair” with a desired trait is inserted into the void.

CRISPR is being widely used in human disease research (Read Biotech 2.0 FAQ on Gene Editing), but there are few approved advances. The agricultural sector is further along. The USDA determined in April 2016 that it will not regulate a non-browning mushroom genetically modified using CRISPR—Cas9, making it the first CRISPR-edited product to receive a green light from the US government.

Numerous animal products are being developed including pigs that don’t need to be castrated, piglets protected from disease, and low-fat piglets that better regulate heat (leading less piglet deaths due to cold).

Here is a visual representation of how gene silencing and editing with CRISPR works (Science in the News, Harvard) 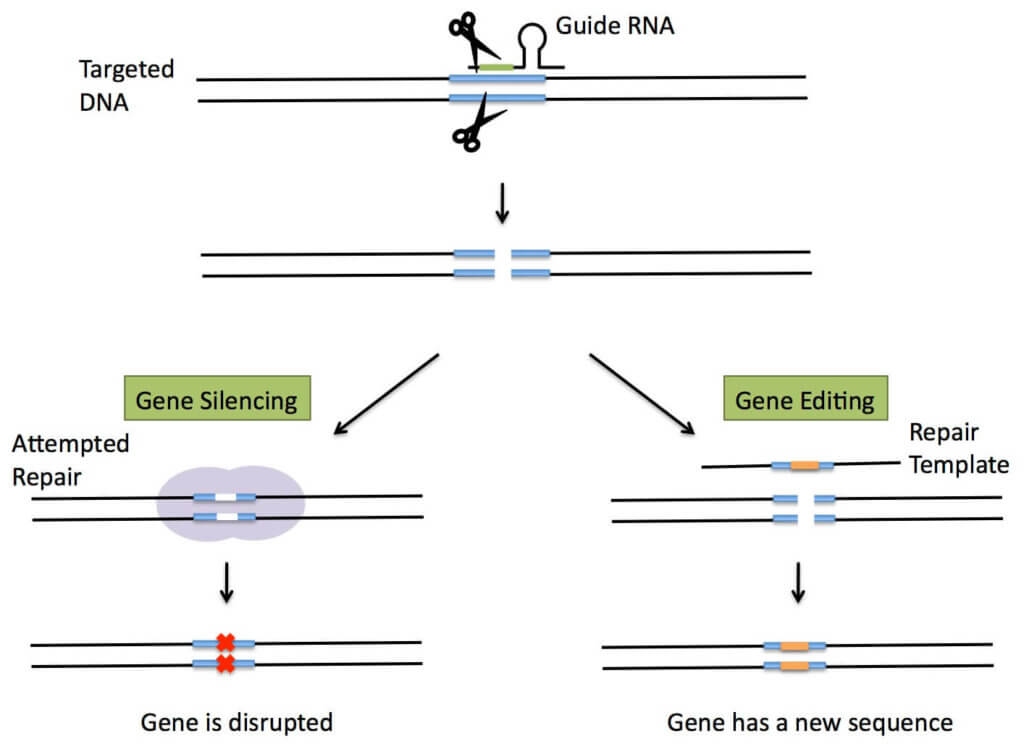 Other non-gene editing NBTs include:

Gene editing and other NBTs offer several advantages over traditional transgenic techniques. Among the most notable is that governments may regulate these products (when developed without foreign DNA) less strictly than they do traditional transgenics because they more closely mimic natural processes. The USDA has ruled in several instances that it does not need to review new varieties made without transgenics. Those products, however, still face scrutiny from the Food and Drug Administration (FDA) if they are destined for the human food supply.

The precision of the new techniques also results in fewer unintended changes. Researchers say there is still the chance of creating so-called “off-target effects” during the slicing and splicing, but say the dangers are minimal with crops. GMO critics argue that there’s no reason to view gene-edited crops differently than transgenic crops even though ‘foreign’ genes are almost never involved.

It’s still not clear whether the USDA has jurisdiction, under current laws, over crops and livestock developed through gene editing that doesn’t involve the insertion of foreign DNA. The agency has concluded that if an edit cannot be distinguished from a natural occurring mutation, it is not a GMO. The United States is working on an overhaul of its patchwork method of regulating this fast-moving sector.

The European Union, which heavily restricts many traditional GMOs in part because of the concern of moving genes across the species barrier, is assessing how to regulate plants and animals developed through these techniques. The commission currently defines GMOs as organisms with alterations that can’t occur â€˜naturally’, but it says it will clarify the issue. In Sweden, authorities concluded that CRISPR-edited plants (as long as they don’t contain foreign DNA) shouldn’t be defined as GMOs under EU legislation. Other countries throughout the world are going through their own evaluations as how to regulate NBTs.