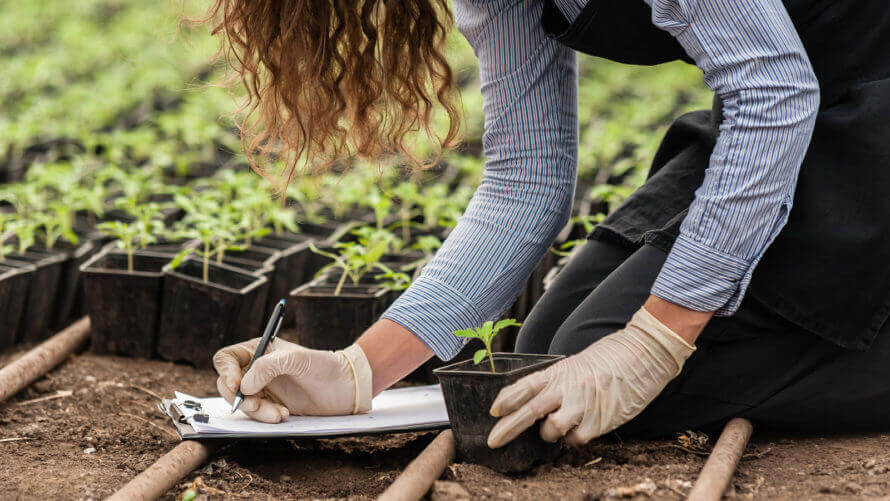 We're in a unique period where we've got the technology potentially in place to start changing the course for a lot of these species before they go extinct.
—Ryan Phelan, Revive and Restore
This GE American chestnut tree is a Pandora's box of potential disasters best left closed.
—Anne Petermann, executive director Global Justice Ecology Project

A variety of factors, including climate change, disease and habitat loss, are expected to eliminate 15 percent to 40 percent of the world’s plant and animal species during the next 40 years. This has scientists, agriculture industry leaders and some conservationists looking to genetic modification as a way to save, or even restore, some threatened plants and animals. Already efforts are underway to bring back the once plentiful American chestnut tree and to protect a wide range of endangered crops, including the Cavendish banana, Florida oranges and California grapes.

As with most things related to GMOs, there is opposition. Critics including supporters of biotech innovation worry about unintended consequences of preserving or reintroducing lost species. Activists argue that these efforts are attempts by large agriculture firms to assert greater control over the world’s food supply.

Some scientists and ecologists argue that humans are in the midst of an “extinction crisis” — the sixth wave of extinctions over the past half billion years, but this one facilitated in part by humans. Extinction is a natural phenomenon, but the rate of extinction is not. Scientists estimate we’re now losing species at 1,000 to 10,000 times the ‘natural’ background rate, with literally dozens going extinct every day.

Through photosynthesis, plants provide the oxygen we breathe and the food we eat the foundation of most life on Earth. They’re also the source of a majority of medicines in use today. Of the more than 300,000 known species of plants, the IUCN (International Union for Conservation of Nature and Natural Resources ) estimates that about 68 percent of the 13,000 plant species it has identified are threatened with extinction.

Among those making a case for considering genetic intervention in this arena is a group of biologists from Idaho State University, who have suggested three options Â to what they call facilitated adaptation.

Ultimately, successful facilitated adaptation will require unprecedented collaboration between organismal, ecological and molecular biologists and climate scientists. Biorepositories such as seed banks, natural history museums and zoological parks, including the Frozen Zoo at San Diego Zoo in California, which houses around 9,000 frozen cell samples from endangered species will need to be integrated with advances in biotechnology and efforts to explore the genomic mechanisms underlying adaptive traits associated with climate change, catastrophic diseases and so on.

The scientists also highlight the limitations and yellow flags. The genetic techniques work best when a desired trait resistance to a particular disease, for example is controlled by a small number of genes. Inserting larger numbers of genes raises the complexity of breeding operations and increases the chances of unintended consequences. Others also point out that there are no guarantees that new GE variants won’t eventually develop vulnerability to a particular threat.

Regardless, the idea of using GM technology in defense of a plant is not new. One of the best known examples is the successful effort in the 1990s to save Hawaii’s papaya industry. It was devastated by ringspot virus, which first showed up in the 1950s, but spread through the islands in the following decades.

Researchers used genetic material from the virus to reinvigorate the Rainbow papaya, which resists ringspot and now represents nearly 80 percent of the state’s papaya crop.

More recently, attention has focused both on plants that face current and future threats as well as some that have already been effectively wiped out by disease.

In the latter camp is the American chestnut, a tree that was once a prominent fixture in forests throughout the eastern United States. Trouble came in the 1870s, when it’s believed that a shipment of chestnut seeds from Japan was infected with a fungus Cryphonectria parasitica. Asians chestnuts are resistant; American chestnuts are not.

Within five decades, some 3 billion trees were killed by the blight, leaving only saplings that occasionally rise from the soil before being stricken. After 25 years of efforts, researchers have developed a genetically modified American chestnut that that can resist the disease, using genetic material from wheat.

The tree makes for an interesting case study in that it’s the sort of project restoration of an American icon that would expect to attract widespread support from the scientific and conservation communities. Biologist William Powell, co-director of the American Chestnut Research and Restoration Project:

I think if we can’t get this tree deregulated and out in a restoration program, you’re not going to get any genetically engineered tree out. You can’t argue a better tree.

Anne Petermann, executive director of the Global Justice Ecology Project, says a revived tree would benefit lumber and paper companies at the expense of the environment. She also criticized suggestions that the American chestnut could provide a source of food, as it once did in early America.

Really? A food source for the poor? People are going to be heading out with their burlap sacks collecting GMO chestnuts to roast, grind into flour or boil into candy? This is the answer to hunger? And what is the health impact of eating GMO chestnuts? Is this even being assessed? No.

The crisis in the Florida citrus industry, beset by Huanglongbing or citrus greening, may force regulators and conservationists into action. The incurable disease is caused by bacteria that attacks the vascular systems of trees. Infected trees produce bitter, poorly-colored, misshapen fruit. The disease, spread by insects, hit Florida in 2005; it’s resulted in billions of dollars in damages, with production dropping to a 50-year low.

The Environmental Protection Agency, in 2015, approved a three-year large-scale test of a new orange tree that resists greening, using genetic material from spinach. Assuming testing goes well and tree receives regulatory approval, it could hit the market by 2018 2018.

Like all GMO products, it’s expected to meet resistance from consumers and from other nations that prohibit importation of GMO crops. Still, the initiative has received qualified support from some voices that have stridently opposed GMOs in the past, including Mother Jones.

Of immediate concern to African consumers and aid groups are two regional staples the cassava threatened by bacterial and fungal diseases and the banana, threatened by banana bacterial wilt. GM solutions have been developed to rescue these foods, but opposition from activist groups have scared governments into inaction.

Many countries globally face the destruction of the Cavendish banana, the world’s most popular banana, which is threatened by Tropical Race Four or Panama disease. In December 2015, a group of Dutch researchers released a report concluding that the devastating disease is responsible for an epidemic afflicting banana growers throughout Asia. It also has spread to Australia, New Zealand, Africa and parts of the Middle East. It’s eventual spread to Latin America, the heart of the banana industry, is considered inevitable. According to the researchers:

By now, TR4 may have affected up to approximately 100,000 hectares, and it is likely that it will disseminate further either through infected plant material, contaminated soil, tools, or footwear, or due to flooding and inappropriate sanitation measures. Clearly, the current expansion of the Panama disease epidemic is particularly destructive due to the massive monoculture of susceptible Cavendish bananas. 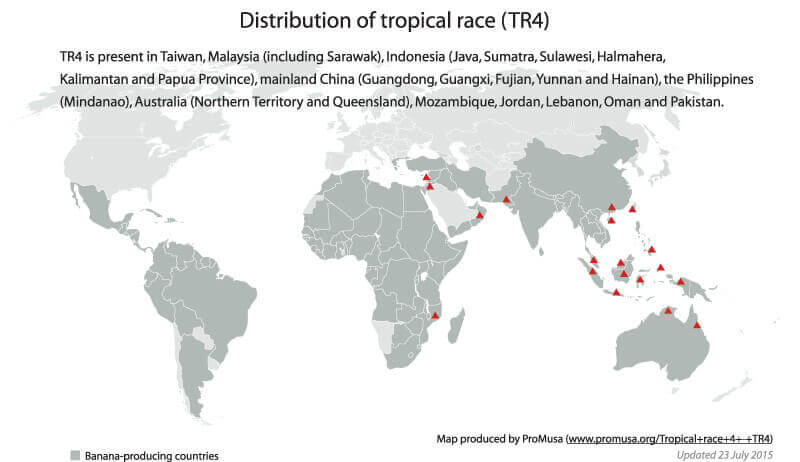 Ironically, we only know about the Cavendish because it replaced the Gros Michel banana, which was, itself, wiped out by Panama disease in the 1950s.

There are dozens of banana varieties grown around the world, but most are not exported for a variety of reasons, including flavor, appearance and ability to withstand the rigors of long-distance travel.

The problem with bananas like the Cavendish and Gros Michel is that they are grown in monoculture, each is essentially a clone of the same banana. A disease that affects one, affects them all. Saving the Cavendish, proponents argue, will necessarily require some sort of GMO solution.

Scientists and conservationists see genetic engineering as a tool that can be used to combat diseases that threaten a range of animal and plant species. The issue takes on particular importance in the case of crops that provide food and livelihood across many African nations. Steven Cerier, writing for the Genetic Literacy Project:

Two crops, banana and cassava, in particular are endangered, and not rescuing them could have a serious impact on the economies of many African countries. Using genetic engineering could save these crops as well as provide aÂ boon for Africa’s wealth and self-sufficiency. But activists continue to stall these efforts.

Scientists have developed GE bananas that are resistant to banana wilt and 19 varieties of GE cassava resistant to brown streak disease and mosaic disease. But both projects face opposition from NGO groups that have accused scientists of creating hazardous or ecologically irresponsible foods. These anti-GMO campaigns have been criticized by Dale Sanders, head of the John Innes Center, a British research facility:

I find it very sad that NGOs whose stated aim is to improve food security and prevent malnutrition should be making false suggestions that GM crops are any less safe than conventional breeding. GM technology offers huge potential to improve yields and combat disease in crops that millions of people rely on.