Which genetically engineered crops and animals are approved in the US? 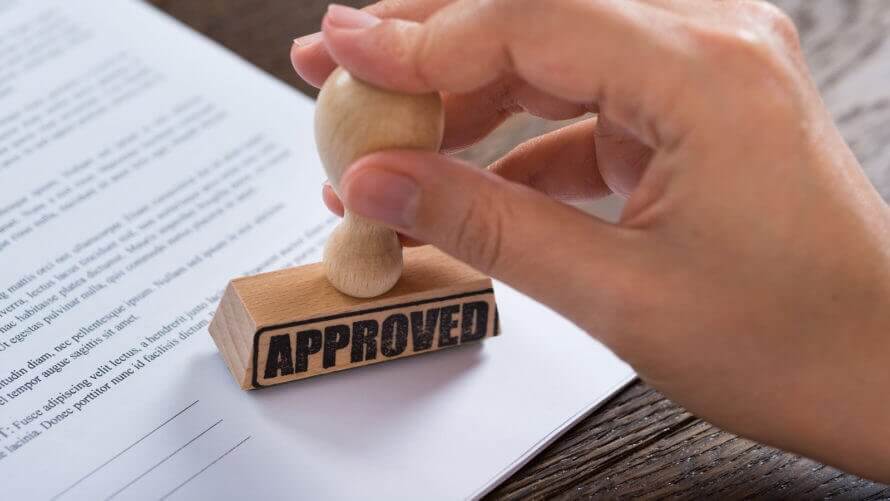 GMOs are the most regulated and tested product in agricultural history.
—GMO Answers
In the U.S., the government has approved GMOs based on studies conducted by the same corporations that created them and profit from their sale.
—Non-GMO Project

Genetically engineered crops have been approved for cultivation in the United States since the 1990s. Today, there are 10 GMO crops currently produced in the US, while more than 120 GM seeds with unique traits have been deregulated. More than 90 percent of corn, soybean, cotton, canola and sugar beet acreage in the US is GMO. Very little of the US commodity crops are sold directly to consumers as food (limited amounts of sweet corn are GMO). Much of the corn and soybeans go to animal feed or are used to make ethanol. It’s difficult to find processed foods that don’t include a GMO ingredient.

Recent approvals of new biotech apples and potatoes have some biotechnology supporters hoping new products, with traits such as disease resistance or nutrition enhancement, will move more quickly through the regulatory pipeline. New gene editing techniques are allowing scientists to more easily perform cisgenic breeding — genetic manipulation without the addition of foreign genes. Those products face lower regulatory hurdles when compared with transgenics, in which genes are moved into plants or animals from other species.

Advocacy web sites often make claims such as, “the average supermarket is full of genetically modified foods.” In fact, very few fruits or vegetables are grown from modified seeds and only 10 GMO crops are available for food or commercial use in the US. But soybeans and corn are widely used in processed foods, although the percentage estimated by the non-GMO project as high as 70% — is unknown.

What genetically modified foods have been approved for human consumption in the United States?

There are more than 120 varieties of GM crops that have been regulated in the United States mostly versions of herbicide tolerant or insect resistant crops. There are dozen approved GMO corn varieties, for example. Some products have been approved but are no longer being sold, such as the first GMO food, the Flavr Savr tomato, introduced in 1994 but withdrawn because it didn’t taste very good.

The following chart, by the USDA Animal and Health Inspection Service, shows the variety of GMO crops that have been approved in the U.S.:

The International Service for the Acquisition of Agri-Biotech Applications (ISAAA) also maintains a database of crops that have received regulatory approvals. There are 29 of them, though some are not actually in production or have been abandoned. A new generation of GM plants and animals have recently been approved or are on the cusp of approval, depending upon how regulatory battles unfold. The AquaBounty AquAdvantage salmon, which grows twice as face as conventional Atlantic salmon and is more sustainably grown, has been approved by the EPA, but many hurdles remain before it gets to the American dinner plate. The Innate potato and Arctic Apple, which do not bruise or brown as easily as conventional varieties, are in limited distribution after approvals in 2015. The US Department of Agriculture (USDA) determined in April 2016 that it will not regulate a mushroom genetically modified with the gene-editing tool CRISPR—Cas9, making it the first CRISPR-edited organism to receive a green light from the US government. The mushroom is one of about 30 genetically modified crops that have bypassed the USDA GMO regulatory system in recent years.

Despite these innovations the overwhelming majority of what the public understands to be GMOs are a handful of more traditionally engineered crops: corn soybeans, cotton and alfalfa. The adoption rate in the US of GM corn, soybeans and cotton has been overwhelming since their introduction in 1996. Today, more than 90% of corn, soybeans and cotton (cottonseed oil is often used in food products) is grown from genetically modified seeds. Farmers choose biotech seeds for a variety of reasons. They help manage weeds, control insects, prevent crop diseases, increase productivity or enhance nutritional content. 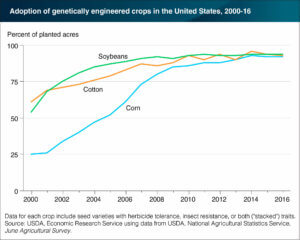 ISAAA also maintains a database of approved traits, but here are the most common types of modifications found in crops and food:

Herbicide tolerance (HT): Plants are bred for resistance to herbicides such as glyphosate to improve farmers’ ability to control weeds, which improves crop yields. HT crops can be sprayed without being harmed, while weeds are killed. This allows farmers to use less impactful herbicides, to limit the number of applications in a season (saving fuel on large farms). The adoption of herbicide tolerant crops also has facilitated a massive shift to conservation tillage on millions of acres of U.S. farm land — increasing carbon sequestration and decreasing soil erosion. Among the crops with these traits are corn, cotton, canola, soybeans, sugar beets and alfalfa.

Insect resistance (Bt): Bt corn, Bt cotton and now Bt brinjal (Southeast Asian eggplant) naturally produces proteins from the bacteria Bacillus thuringiensis that are poisonous to insects such as the European corn borer. Bt has been used by farmers, both conventional and organic, for decades.

Resistance to environmental stress: Crops can be modified to be resistant to extreme environmental conditions. Examples include flood-tolerant rice and drought resistant corn

Disease resistance: Plants have been developed to fight off specific diseases. Among them is the Rainbow papaya, which has been credited with saving Hawaii’s papaya industry after it was nearly wiped out by the ringspot virus in the 1990s. Geneticists are developing a GMO solution to save the Florida orange crop, threatened by citrus greening, but it’s regulatory fate and consumer acceptance are problematic.

Consumer or producer enhanced: These include foods with traits designed to appeal to consumers and/or producers. Among them are the recently approved Arctic Apple, which resists browning, and the Innate potato, which resists bruising. In April 2016, the USDA decided it did not need to regulate the first CRISPR gene edited food, a non-browning mushroom.

In 2015, regulators approved, for the first time, a genetically engineered animal for human consumption the AquaBounty AquaAdvantage salmon. This altered version of the Atlantic salmon grows roughly twice as fast as the standard variety. This is accomplished, in part, by the insertion of genetic material from the ocean pout, an eel-like fish, which allows them to grow year round.

While it took more than a decade for the AquaAdvantage salmon to gain regulatory approval despite political opposition from the White House, there are hopes that approvals could come faster for certain types of biotech food products.

However, the Innate Potato and Arctic Apple faced far lower regulatory hurdles than the GM salmon or most crops that have been approved to date. They were developed through a type of genetic manipulation, gene silencing, that turns off genes in the plant or animal. In contrast, transgenics involves the addition of genetic material from other species.

Cisgenic breeding, accomplished through newer technologies like CRISPR (which allows precise editing of genomes), may accelerate a regulatory approval process that averages seven years and costs hundreds of millions of dollars for transgenic GMO products.

Scotts Miracle-Gro has developed a series of GMO grasses that has avoided the regulatory tangle associated with transgenics. The company uses a process that essentially shoots DNA-coated metal particles into a plant cell to create glyphosate-tolerant turfgrass. The USDA has agreed that the process falls outside of its jurisdiction.

Transgenic animals may soon find an easier regulatory path, given changes in how they are developed, said Scott Fahrenkrug, chief executive of Recombinetics, an animal-biotechnology firm in St Paul, Minnesota.

Fahrenkrug says that his company is developing several such animals, including cattle that do not have to be dehorned and pigs that do not need to be castrated. Recombinetics’ animals are engineered using genome-editing techniques that Fahrenkrug argues do not require FDA approval. The agency regulates animals that are engineered using a “recombinant DNA construct”, but his animals are modified by injecting protein and RNA into embryos. “It’s a treatment, not a transgene,” he says.

The FDA has yet to announce how it will view such animals, but Fahrenkrug takes approval of the salmon as a sign that the agency is willing to allow them onto the market. “I’m feeling optimistic now,” he says.