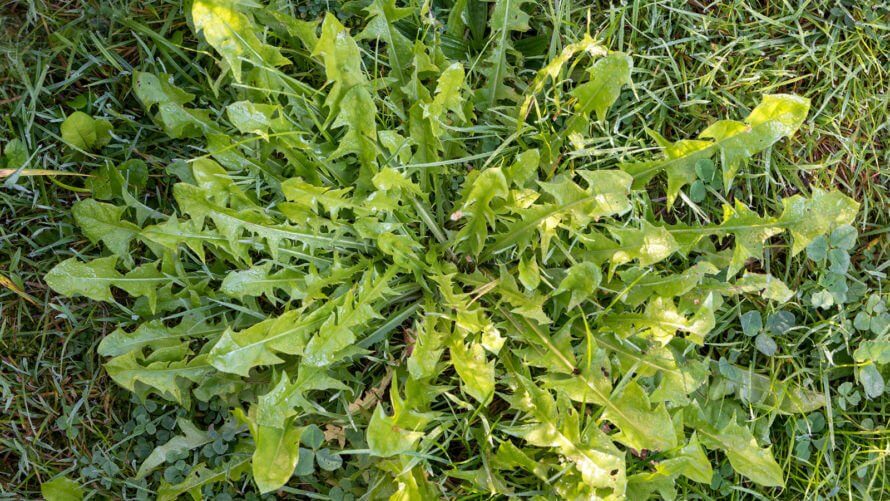 Resistance to pesticides is not new or unique to weeds.
—Brad Hanson, weed specialist at the University of California at Davis
Glyphosate use has resulted in uncontrollable, herbicide-resistant superweeds.
—Anna Meyer, Food and Water Watch

Herbicide-resistant weeds often referred to as “superweeds” are nuisance plants that have developed resistance to one or more herbicides. They have been a serious problem for decades, but increasingly, GMO critics have focused criticism on weeds that have developed immunity to the popular herbicide glyphosate (patented as Roundup), which is often paired with genetically engineered herbicide tolerant crops, mostly corn, soybeans, cotton and alfalfa in the United States. These GMO crops are called herbicide tolerant (Ht).

Herbicide-GMO seed pairings offer many advantages for farmers, including lower overall costs, increased yields and a reduction in total chemical use. But weed resistance is compromising those advantages, worrying farmers who are forced to deal with a growing and expensive weed problem and consumers who fear trace chemicals in the food supply. It’s also fueling criticism from advocacy groups who blame conventional “industrial farming”, and GMO crops in particular, for the rise of hardier weeds, and say proposed solutions, such as stacking herbicide resistant traits, could compound the problem.

Scientists say the challenge of herbicide tolerant weeds pre-dated the introduction of GMO varieties in 1996 and note that some of the most severe weed problems affect non-GMO crops, such as conventionally-bred herbicide tolerant sunflower plants. Scientists say weeds are inevitable in modern farming unless farmers rotate and mix their chemicals and include some non-herbicide defenses.

Scientists generally scorn the term superweeds, arguing that it suggests a weed is exceptionally strong or even invulnerable. Rather, these weeds have developed a resistance to a particular herbicide. According to Andrew Kniss, Associate Professor of Weed Biology and Ecology at the University of Wyoming, and known for his independent views:

The first herbicide resistant weeds identified in the United States were a variety of the spreading dayflower, found in Hawaii in 1957, with resistance to the herbicide 2,4-D. But while hardy weeds predate the 1974 introduction of glyphosate, they have spread rapidly and steadily in the decades that followed. The popular herbicide glyphosate was first paired with some GMO crops in 1996, but as the chart illustrates, it’s just one of many herbicidal products to which plants, naturally, developed resistance. The chart demonstrates that hundreds of weed species have developed tolerance to several classes of herbicide over the past four decades. 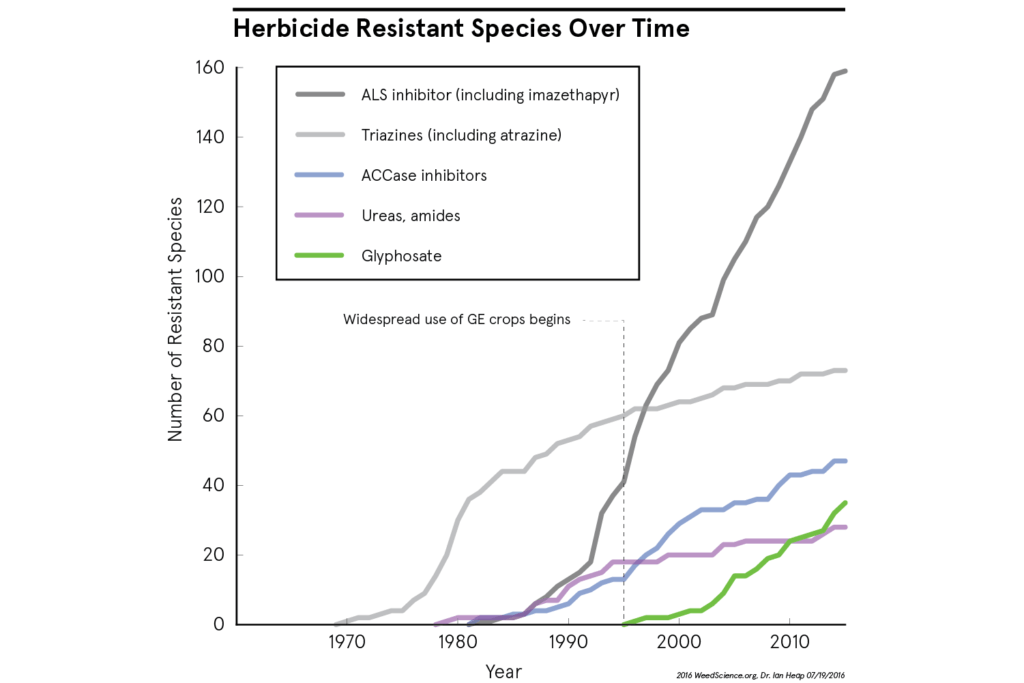 Before herbicide-tolerant GMO crops were introduced in the 1990s, farmers fought weeds by adding herbicides to the soil before planting or before weeds emerged. They’d spray again to fight weeds that survived the initial applications. And again if necessary during the growing season. It was a costly strategy that damaged some crops and was not ecologically sustainable.

The new era of genetically modified crops allowed farmers to spray their fields before and after planting with a herbicide (at first only glyphosate), that didn’t harm crops. And since it doesn’t need to be incorporated into the ground, it opened the door to conservation tillage, which cut back on greenhouse gas emissions. More than 80 percent of farmers who use GMO soybeans, for example, use no-till or low-till conservation practices more than double the rate of non-conventional soybean farmers. Glyphosate is also less persistent in the soil and water than most herbicides.

One problem that emerged was tied to Monsanto’s early belief that weeds were unlikely to develop resistance to Roundup. Some farmers relied too heavily on the herbicide, and took less care in instituting other pest management practices that might have delayed the rise in glyphosate-resistant weeds.

Today, the general consensus of weed scientists is that herbicide resistance is inevitable when farmers rely too heavily on one chemical for weed management. “Sole reliance on glyphosate by many producers is believed to be the primary factor in the evolution of weed resistance to glyphosate,” according to a report by the U.S. Department of Agriculture’s Economic Research Service. There have been suggestions that farmers could greatly reduce the problem by alternating crops and herbicides each year. But even that may not be enough. Studies have shown that mixing herbicides is better than rotating them to prevent herbicide resistance.

To fight glyphosate weed resistance, crop scientists have developed newer genetically engineered seeds that “stack” two or three of traits resistant to different herbicides, including glyphosate, 2,4-D, dicamba or glufosinate. Many scientists, including Kniss, believe those new stacked herbicides, sold as Enlist Duo by Dow AgroSciences and Roundup Extend by Monsanto, may be one of the more effective options available in the fight against herbicide resistant weeds:

It’s an approach that has its critics. The Pesticide Action Network, among other advocacy groups and some scientists, warns that adding more herbicides to the mix products puts farmers on a pesticide treadmill.

Also referred to as the “pesticide trap,” farmers get caught on the treadmill as they are forced to use more and more and increasingly toxic chemicals to control insects and weeds that develop resistance to pesticides. As “superbugs” and “superweeds” develop in response to widespread and continuous use of chemicals, a farmer will spend more on pesticides each year just to keep crop losses at a standard rate.

The recent introduction of crops genetically engineered for use with the herbicide 2,4-D provides a clear example of the pesticide treadmill. Widespread planting of RoundUp Ready crops and the associated application of RoundUp prompted weeds to develop resistance to the product. Farmers are forced to return to use of 2,4-D an antiquated, drift-prone chemical clearly linked to cancer and reproductive harms.

Some mainstream scientists are skeptical as well. “What is more troubling is that 2,4-D and dicamba are older and less environmentally friendly,” said David Mortensen, Professor of Weed Ecology at Penn State University.

Superweeds are super only in their ability to resist one or more specific herbicides. Aside from that, there is nothing that separates them from any other weed found in a farmer’s field, and they are not linked specifically to GMOs or to glyphosate. Most scientists see the evolution of these resistant weeds as inevitable whenever herbicides are relied upon exclusively to combat nuisance plants.

Most scientists and farmers believe that the use of synthetic herbicides is a necessary evil in modern farming if we hope to generate the kind of yields necessary to keep food costs in check and address global food security.

Unless we plan on completely removing herbicides from modern agriculture (a laudable long-term goal, but unrealistic in the short-term), we need to try and protect the utility of the herbicides we have. Since herbicide rotations are ineffective on their own, the most practical way to maintain the value of current herbicides is to mix them with other effective herbicides. This will almost certainly increase the total amount of herbicides we use.

Many people have a deep aversion to the idea of spraying chemicals on fields. But herbicides are often the most environmentally friendly solution, reducing the need for plowing and burning of fields, and by dramatically increasing yields, decreasing the clear cutting of forests to create arable land.

But weed experts stress that herbicides, by themselves, even if mixed, cannot solve the problem of herbicide resistant weeds. If farmers need to employ other weed control techniques, including the use of cover crops, mechanical weed management and possibly modifying no-till production (which promotes soil health and limits the release of green house gases from our soil at the expense of weed control.)

“We must stop looking to herbicides as the solution to a problem created by herbicides,” Andrew Kniss has written.