Safety is relative, and there have been many long-term feeding studies in animals which haven't observed any harm, suggesting that follow-up testing of GE crops in humans is unnecessary.
—Layla Katiraee, molecular geneticist
We need long-term safety tests that are relevant to human health done by people independent of GM vested interests. The safety testing done now is woefully inadequate.
—Judy Carman, Institute of Health and Environmental Research, Australia

GMO critics claim that there have been almost no long-term safety studies on genetically modified crops and foods. In fact, there have been numerous long-term studies on GMO seeds and products. Many of these studies cover periods of two or more years, with some covering multiple generations of animals. Animals feed GMO feed have been monitored for more than 20 years.

Critics also say that the vast majority of studies have focused on animals, rather than humans. That’s accurate. There are reasons for that, including the central fact that long term scientific testing of chemicals and foods for ethical and practical reasons focuses exclusively on animals.

Key biotechnology firms, including Monsanto, Syngenta and Bayer, fund a lot of the health and safety research. That’s required by regulatory agencies around the world. But there have been hundreds of research studies that have received no industry support, and the findings of the industry-funded studies and the independent ones have reached the same consensus conclusion: genetically modified foods pose no more safety or health concerns than other conventional or organic varieties.

Critics of crop biotechnology have long contended that GMO foods have not been ‘proven’ safe because, in the words of the London-based anti-GMO NGO Earth Open Source, “Few long-term and in-depth studies have been carried out.”

Consumer Reports, which is highly critical of GMOs, included a comment by Robert Gould, president of the board of Physicians for Social Responsibility, in a 2015 commentary:

The contention that GMOs pose no risks to human health can’t be supported by studies that have measured a time frame that is too short to determine the effects of exposure over a lifetime.

Doug Gurian-Sherman, when he was a senior scientist at the Union of Concerned Scientists (now with the anti-GM0 Center for Food Safety), suggested that the long-term safety of genetically engineered foods is far from settled, and regulators are to blame in part. “No long-term safety tests in animals are required by any regulatory agency,” he wrote, implying that government agencies around the world were failing to protect public health.

The argument is often used whenever scientists point to the growing number of scientific and regulatory bodies that have publicly concluded that GMOs pose no unusual or unique health or safety concerns. In May 2016, the National Academies of Science, Engineering and Medicine released a report, two years in the making and drawing on thousands of documents, 900 separate research studies and hundreds of independent researchers, concluding that GMO foods are just as safe as non GMO foods:

The committee carefully searched all available research studies for persuasive evidence of adverse health effects directly attributable to consumption of foods derived from GE crops but found none. Studies with animals and research on the chemical composition of GE foods currently on the market reveal no differences that would implicate a higher risk to human health and safety than from eating their non-GE counterparts. Though long-term epidemiological studies have not directly addressed GE food consumption, available epidemiological data do not show associations between any disease or chronic conditions and the consumption of GE foods.

The report highlights that there have been no long epidemiological studies which have directly addressed the human health impact of GM food consumption.

Is there reason for concern, as GMO critics contend? Who pays for the research? How long is long-term? Why have there been no long-term studies on humans?

Looking at the body of available research, there have been dozens of long-term studies (examples of which can be found here and here). Two dozen of them were reviewed in a 2012 report in the journal Food and Chemical Toxicology, by Chelsea Snell and colleagues. The study examined feeding studies ranging from 90 days to two years and from two to five generations. The researchers concluded they found nothing to suggest there is a health danger presented by GMOs.

Results from all the 24 studies do not suggest any health hazards and, in general, there were no statistically significant differences within parameters observed. However, some small differences were observed, though these fell within the normal variation range of the considered parameter and thus had no biological or toxicological significance.

The Snell review has been attacked by GMO critics, including by Gurian-Sherman and Earth Open Source. According to Gurian-Sherman:

[T]he number of genes reviewed in the Snell paper is actually very small, and not representative of what may be put into crops in coming years. Of the dozen long-term studies reviewed, 10 tested the gene for glyphosate herbicide resistance (EPSPS) in soybeans, one was a Bt insecticidal gene in corn, and one a cedar pollen gene in rice.

Even if generalizations about safety were possible, that is a tiny representation of the possibly hundreds of genes that may be used in coming years, and virtually meaningless for drawing general conclusions.

A review by Snell and colleagues purporting to present long-term studies showing long-term safety is misleading, with double standards being used to dismiss findings of harm while accepting at face value findings of safety.

Critics often cite as a red flag the research of French biologist and anti-GMO activist-scientist Gilles-Eric Séralini, who they claim has done the only truly independent long-term research. His most commonly cited study, “Long-term toxicity of a Roundup herbicide and a Roundup-tolerant genetically modified maize,” originally published in 2012 in Food and Chemical Toxicology, concluded that rats fed glyphosate resistant genetically engineered corn developed grotesque cancerous tumors.

The work was retracted after criticism from scientists and oversight bodies that the study used cancer-prone rats, the controls were shoddy and the data cherry-picked (e.g. data showed some rats fed glyphosate had few tumors, which the authors did not highlight in their commentary). Séralini  and anti-GMO groups claimed the journal bowed to industry pressure. It was republished, without peer review, in Environmental Sciences Europe, to further criticism by scientists.

Seralini’s conclusions also have been contradicted by other studies of glyphosate resistant GMO crops, including a 2007 paper released by the Japanese Department of Environmental Health and Toxicology. The 52-week studyÂ focused on rats fed GM soybeans, and found “no meaningful difference between rats fed the GM and Non-GM soybeans.” And a 2014 feeding study by a team of European researchers found that rats fed a diet containing 33 percent GMO maize over 90 days experienced no notable toxicological effects.

No health problems have shown up in animals feed GMO feed. Globally, food-producing animals consume 70-90% of genetically engineered crop biomass, mostly corn and soybean. In the United States alone, animal agriculture produces over 9 billion food-producing animals annually, and more than 95% of these animals consume feed containing GE ingredients. In 2014, animal genomics expert Alison Van Eenennaam and assistant Amy Young at the University of California-Davis examined data on 100 billion animals covering trillions of meals over nearly three decades before and after the introduction of GMO feed in 1996:

An extensive search of peer-reviewed literature and field observations of animals fed diets containing GE crop products have revealed no unexpected perturbations or disturbing trends in animal performance or health indicators. the performance and health of GE-fed animals were comparable with those fed near isogenic non-GE lines and commercial varieties. 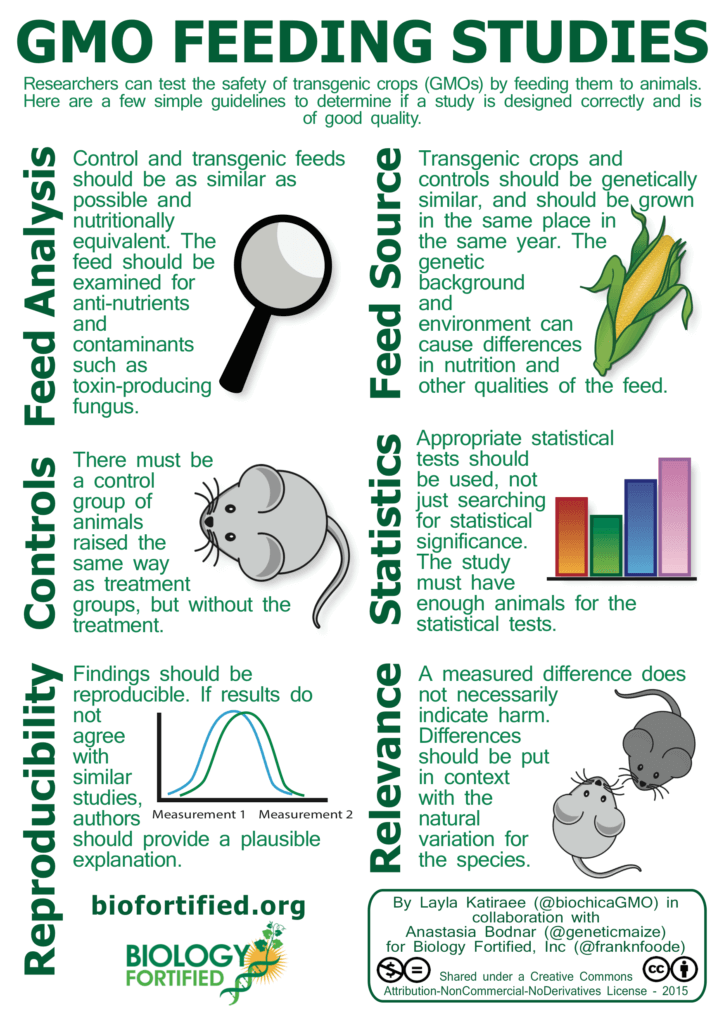 Not surprisingly, the biotech industry provides a major source of funding for research projects in this realm, which they do to ensure that the FDA will not block the introduction of new products. Often this research occurs through grants to scientists at various universities. Still, there remains a healthy body of independently funded research. The European Commission, for example, noted in 2010 that it had invested more than $300 million in 50 projects since 1982. And the database compiled by the independent NGO Biology Fortified includes more than 200 studies that received no industry funding.

Although many GM0 studies are long term, as critics point out, few studies have looked specifically at the impact of GMOs on humans. Most GMO products are considered, by scientists and regulators, to be essentially the same as their non GMO counterparts. The only tests, to date, involve GMO products that add a health benefit of some sort. The best example of this is Golden Rice, a crop, still not yet approved, engineered for vitamin-A enrichment, which has gone through two successful safety trials involving human volunteers.

The vast majority of all health and safety testing is done on animals because humans cannot be kept in controlled environments for months or years at a time. Even if researchers decided to attempt long-term testing of GMOs on humans, they would run into insurmountable complications, as explained by biologist Layla Katiraee here and here:

Unlike animal feeding studies, you cannot control for other dietary factors or for lifestyle of the humans in the study. In animal feeding studies, all the animals are inbred so there’s very little genetic variability. All the animals live in the same type of cage, get the same amount of food, sleep, water, etc, but none of this applies to humans.

Among the challenges: the study’s participants would have to commit to eating a prescribed diet that included only one type of GMO food, corn for example, for a year or longer. The rest of their diet would have to be comprised only of non-GMO foods. It raises questions, according to Katiraee:

Who would sign up for a study eating an ear of corn a day for a year? And then who is going to pay for this one-year study on many people of organic food consumption plus GE-corn? If Monsanto or other seed developers pay for it, will anyone trust the data?

Science has long approved the use of animals as surrogates for the safety testing of foods. A researcher proposing a long-term study would face many challenges. Near the top of the list would be the need to secure funding for a project expected to yield no meaningful results, based on similar tests involving animals.

The long-term safety fears fanned by GMO critics also cast aside the conclusions of scientific and regulatory bodies that GMO foods are substantially equivalent to non GMO foods. Nobody, for example, asks for long-term testing of foods developed through the many other breeding techniques, including mutagenesis, the bombardment of seeds by radiation or chemicals that produced the sweet Ruby Red grapefruit, the disease-resistant Osa Gold pear, versions of durum wheat used in premium Italian pasta and thousands of other common foods often sold as organic.

Such testing would hold GMOs to a higher standard than any other food consumed by humans, said Bruce Chassy, professor emeritus of food safety and nutritional sciences:

I can’t resist pointing out that long-term tests have never been required for any new seed variety or crop. GM crops are the only crops to be subjected to premarket safety assessments, in spite of the fact that crops produced, using other methods of genetic modification and having identical new traits, are not tested before their use.