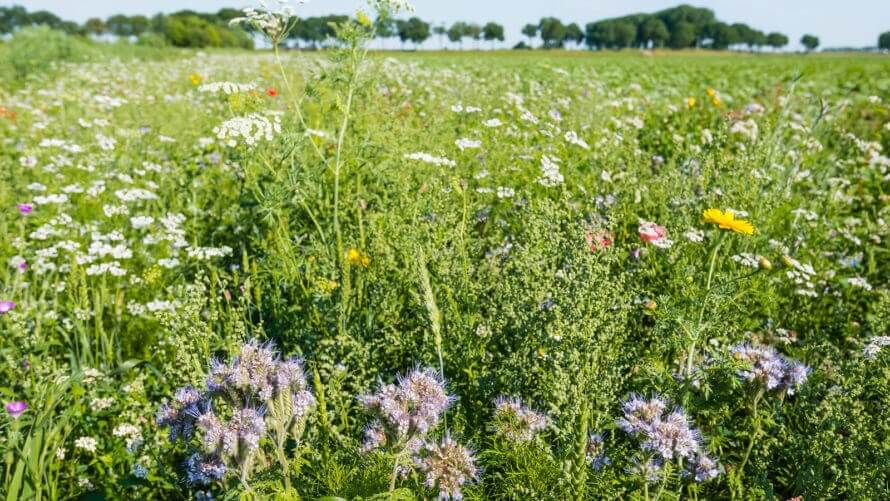 [M]onoculture is indeed the worst possible way to grow crops, except for all the others that have been tried from time to time.
—Andrew Kniss, Associate Professor of Weed Biology and Ecology, University of Wyoming
GMOs are part of an industrial system of agriculture that is destroying the planet. [T]hese corporate led monocultures are destroying biodiversity, and we are losing access to the food systems that have sustained us throughout time.
—Vandana Shiva, philosopher and anti-GMO activist

GMO skeptics often invoke the terms “monoculture” and “biodiversity” as a proxy for criticizing “industrial” agriculture. But farmers around the world were monocropping long before GMO seeds entered the market, as far back as Greek and Roman times.

Monoculture and biodiversity, while often lumped together, are different. Monocropping refers to planting a single crop in a given area. The wildcards the size of the area and the number of years of planting without rotation or interruption are the keys to judging whether a particular case is problematic. The practice has to be assessed in sustainability terms as it makes weeding more efficient and results in the planting of harvest crops on the least amount of acreage, the basis of our low-cost global food system. GMO critics say crop concentration is not worth the long term ecological trade-offs, and advocate smaller-scale farms.

Biodiversity, which is often used interchangeably with monoculture, means something related but different: it refers to the diversity of fruits, vegetables and grains and whether seed diversity is becoming genetically uniform (think inbred breeding of Labradors that has led to hip dysplasia) or more diverse.

Does monocropping lead to less biodiversity? Processed foods rely on commodity grains, which adds weight to the argument by GMO critics. But more and diverse fruits and vegetables are available than ever before. And while monocropping has intensified, farmers have begun rotating their crops more in recent years. And the genetic diversity of large commodity crops has also increased since the 1990s, in part because of the introduction of GMO seed varieties bred specifically to incorporate genes from other plants and microbes. Seed choices have also risen, despite claims to the contrary.

Planting large tracts with a single crop corn, soybeans, wheat, etc. has allowed farmers, including large-scale organic farmers, to achieve the economies of scale necessary to feed a world population that has increased by almost five times since 1900. Monocropping won’t go away. As one agricultural scientist has noted, the opposite of monoculture is “polyculture” and it is entirely impractical for even minimally mechanized farming. The challenge for most farmers organic and conventional is instituting a sustainable crop management system, rotating crops and otherwise managing their farms to preserve soil quality and biodiversity.

Anti-GMO campaigners are withering in their criticism of modern agricultural practices, including monocropping, which the introduction of GMOs encourages, they claim.

“Monsanto’s emphasis on limited varieties of a few commodity crops contributes to reduced biodiversity and, as a consequence, to increased pesticide use and fertilizer pollution,” writes the Union of Concerned Scientists, using Monsanto as a proxy for modern agriculture.

There are three issues at play here. Are GMOs responsible for monoculture? Is it good or bad? And does the practice reduce biodiversity?

An examination of the history of monocropping shows that GMOs had nothing to do with the origins of the practice. As plant pathologist Steve Savage has noted, the ancient Hebrew scriptures (Leviticus 19:19) specifically prohibit planting fields with more than one crop Ancient farmers from the Fertile Crescent to the Far East have always tried to limit a given field or paddy to one crop as the accompanying picture of a 700-year old farming system in China illustrates.

Large-scale single crop farming has been driven by mechanization. It expanded dramatically in the 1920s as a way to grow more food using less resources. The first GMO seed was still decades from reality when post-WWII farmers were faced with figuring out how to keep the world from starving. The Green Revolution led to the adoption of high-yield practices, including monocropping, that now define modern agriculture.

The development of GMO seeds with traits that include herbicide, pest and disease resistance are geared toward the needs of modern farmers. But companies like Monsanto, Syngenta and Bayer are selling to a market that was already there. And there’s a reason that market exists, says weed professor Andrew Kniss:

It is important to recognize that there are many good reasons to grow crops in monoculture. Monoculture is a practice that has allowed many technological advances in crop production. Having only one crop in the field increases our ability to mechanize planting, weeding, and harvest. And the mechanization of agriculture is the reason a majority of the population in developed countries do not still work on a farm. Without mechanization, growing your own food is often a necessity, not a hobby.

There are economic factors that push farmers toward monocropping. One problem is that vast tracts of U.S. farmland aren’t owned by those who farm them. Instead, they operate through leases. And those leases are awarded to the farmers who generate the highest returns which often means sticking with the highest-yielding crop, regardless of what it might mean for the long-term health of the soil. Steve Savage:

From a long-term economic point of view, diverse crop rotation is a great thing to do. If you are a typical farmer in the heart of the Corn Belt, you rent land with no guarantee that you will be the one who rents it the next year. You really can’t afford to plant wheat or barley or oats because your income/acre won’t cover the rent price that is based on what you could get from a corn or soybean crop. So, if you are a rational business-person (which any long-term farmer must be), you have to plant only the crop(s) that make the most money in a given year and farm them in a way which optimizes single year income. This is not ideal from a long-term perspective, but is economic reality.

Critics say monocropping is responsible for a range of ills, including declining biodiversity and increased vulnerability to diseases and extreme weather conditions. If everyone is growing the same thing, they argue, everyone is vulnerable to the same threats. It also encourages a world food system in which farm production is geared toward processed foods. Food journalist Michael Pollan:

I still feel that the great evil of American agriculture is monoculture. It really does contribute to so many problems at the level of the field and the pests, but also at the level of the diet. The thing you learn is the importance of diversity in what you eat, and to the extent you would drive diversity [in farm policy] you would also be creating raw materials for cooking rather than raw materials for processed food, which are mostly corn and soy.

Pollan and such groups as the Union of Concerned Scientists have argued that we need a new farm and food system, not linked to GMOs, that relies on crop rotation, cover crops and the use of natural pest predators instead of relying on synthetic fertilizers and pesticides. These views are popular among the public and critics of modern agriculture, but most agricultural experts and scientists say they are too simplistic. Europe, for example one of the world’s most productive farm regions relies primarily on well-managed monoculture farming.

It’s true that in the case of harvest crops like corn, wheat and soybeans, diversity of plantings can increase the quality of the soil and break up pest cycles. But that’s largely what’s already happening, even on large commodity farms that use GMOs, according to a 2013 report by the U.S. Department of Agriculture:

What about biodiversity? There’s been considerable debate about the diversity of the seed bank available to farmers. Critics often argue that declining options are to blame for fruits and vegetables lacking in flavors enjoyed by earlier generations.

One of the problems faced by large-scale farmers is that they have to consider more than just the flavor of a particular seed choice. Will it survive long trips to distant markets? Will it ripen too soon or too late? Will it be attractive to consumers? Those factors, alone, have pushed some seed choices to the margins, in favor of those considered better for industrial farms.

An oft-cited 1983 study by the Rural Advancement Foundation International looked at seed choices available in 1903 and compared them to those still available 80 years later. The results suggested a decline of more than 90 percent of seed options, represented in this National Geographic graphic.

The findings were challenged in a 2009 study, by University of Georgia researchers Paul Heald and Susanna Chapman, that looked at seeds available in 1903 and 2004. They came to a starkly different conclusion, arguing that many of the supposedly lost seeds were simply the same variety sold under multiple names:

According to the conventional wisdom, the twentieth century was a disaster of monumental proportions for vegetable crop diversity. The conventional wisdom is wrong. Our study of 2004 commercial seed catalogs shows twice as many 1903 crop varieties surviving as previously reported in the iconic 1983 study on vegetable crop diversity. More important, we find that growers in 2004 had as many varieties to choose from (approximately 7100 varieties among 48 crops) as did their predecessors in 1903 (approximately 7262 varieties among the same 48 crops). In addition, we cast doubt on the number of distinct varieties actually available in 1903 by examining historical sources that expose the systematic practice of multiple naming.

Biodiversity of untouched nature will almost always far surpass that of farmland, and it’s important to keep as much of that nature intact as possible. That’s the primary argument for modern agriculture: efficiently farmed land helps reduce the area of farmland needed. The use of GMOs also significantly increases yields, which reduces deforestation and other destructive practices used to create farmland, particularly in the developing world. A 2014 study estimated that the use of genetically engineered crops over the first 15 years of its use had preserved more than 32 million acres from being converted to agricultural use.

In many ways, the role that GMOs play a role in encouraging monoculture cropping is irrelevant. The question really comes down to how it is practiced. And that’s a matter of degree, according to experts such as Kniss:

The problem with this term is the scale. How much “given area” or “land” is required before we call it a monoculture? How long must a single crop be grown on the same area of land before it is considered a monoculture? The word is very imprecise. It seems to be used far more often by people criticizing modern agriculture than those who actually practice agriculture; I presume it is due to the non-specificity of the term. It doesn’t really convey enough information to be very useful to practitioners. It is the scale of the monoculture (both temporal and spatial) that determines whether monoculture is useful or problematic (or both) from an agronomic point of view.