What is plant-based, genetically engineered “fake meat” and why is it being developed? 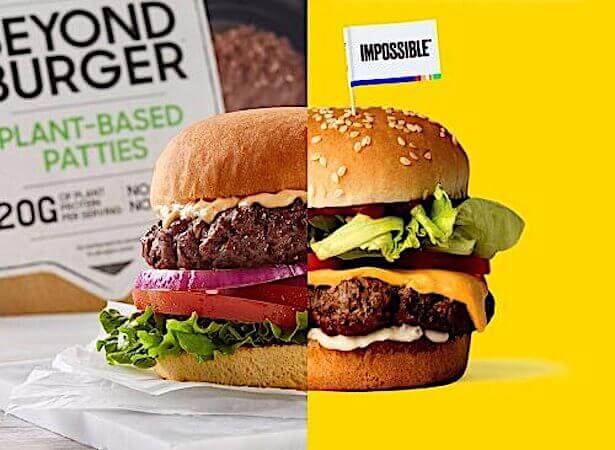 Every year, 66 billion terrestrial animals are slaughtered for food The impact of grazing animals on the environment is devastating. Some experts have even said meat may not be essential for most people, and a vegetarian diet is healthier than a meat-based one. So, the rationale for developing meat alternatives — "fake meat" — is strong.
—Leigh Ackland, professor in Molecular Biosciences, Deakin University
Fake meat has been around a long time. But the new higher-tech vegan meats address one problem - torturing & killing animals — without addressing many others, like resource use and hyperprocessing.
—Mark Bittman, former New York Times columnist, Union of Concerned Scientists Fellow

As climate change accelerates and a growing and more prosperous global population demands more food, farmers and scientists have tapped a number of innovative technologies to help sustainably produce enough calories to feed everyone. Meat has been targeted by many environmentalists because it allegedly takes a heavy toll on the environment, because of resource inputs and the climate change implication of methane gas released by cattle. Proponents of plant-based and lab-grown meats maintain that these foods can serve as viable alternative protein sources for consumers while exacting a smaller toll on our natural resources than animal agriculture.

Made possible thanks to dramatic technological advances, both meat alternatives have attracted attention because they mimic the qualities that meat eaters find appealing in a hamburger. Plant-based meat options, sold most commonly under brand names Impossible Burger and Beyond Meat, began hitting the market in 2013, exploding in popularity in 2019. Lab-grown meat remains in development, although estimates indicate it could be available as soon as 2024, with potentially ‘disruptive‘ effects on diet and the environment.

Given their potential to upend the way we produce food, these new products have made powerful enemies and allies, creating odd alliances in the process. Environmental activists and traditional meat producers — often harsh critics of each other — lobby against these alternative meats. Meanwhile, major companies, including Burger King, Carl’s Jr. and Tyson, have invested in these products, cheered on by technology early adopters. Many scientists have lined up on opposing sides of the issue as well, as food safety officials scramble to devise sensible regulations for these novel products.

Vegan meat alternatives have been on the market for decades. However, these plant-based foods typically have appealed to a small segment of the population that abstains from animal products for health, environmental or ideological reasons. They have failed to attract broad interest from US and European consumers, who eat approximately 200 pounds of meat per person each year. The most challenging hurdle for food manufacturers has been replicating the taste and feel of a beef burger for the meat-loving segment of the market.

The potential market for alternative meat products expanded dramatically in recent years when Beyond Meat and Impossible Foods started developing meat substitutes more palatable to more consumers. Stressing its “non-GMO” ingredients, Beyond Meat makes hamburgers, ground beef, chicken and sausage from yellow peas, mustard seeds, camelina and yeast. The company’s products have been available in US grocery stores since 2013. They so closely mimic traditional meat that many consumers couldn’t tell the difference when Beyond’s products were accidentally mislabeled by a Whole Foods deli in 2014. Beyond Meat has partnered with fast food chains, including Dunkin’ Donuts, Carl’s Jr. and Del Taco, to offer fast-food versions of its products. 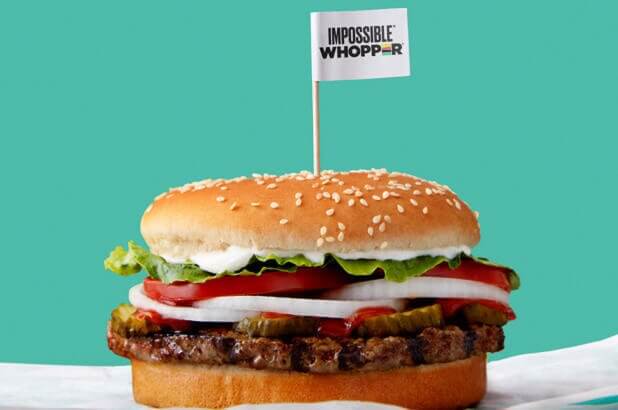 Established to “make our global food system truly sustainable,” Impossible Foods, Beyond’s major competitor, introduced its Impossible Burger in 2016, a plant-based product that “sizzles” and tastes like a beef hamburger and is made with a genetically engineered ingredient. Impossible Foods discovered how to derive heme, the molecule that gives beef its “meaty” flavor, from a protein found in soy called leghemoglobin. The company mass produces heme from this soy protein with the assistance of GE yeast. Other commonly used food ingredients contribute to the beef-like texture and flavor as well.

In July 2018, the US Food and Drug Administration (FDA) declared Impossible’s heme-producing protein “generally recognized as safe” (GRAS), allowing it to be sold immediately with no restrictions or labels. Rather than criticizing biotechnology, the company took a different tack than Beyond Meat, hyping its “genetically engineered yeast” and promoting the established benefits of GMOs. Impossible burgers are also sold by a variety of fast food restaurants, including Burger King as the Impossible Whopper, and White Castle as the Impossible Slider, and hit grocery stores in the fall of 2019.

Some scientists have challenged this analysis of Impossible’s environmental benefits, noting that such reductions rely on inflated estimates of animal agriculture’s use of water, animal feed and carbon emissions. These researchers have noted, for instance, that widely circulated estimates of water consumed by cattle include all of the rain that falls on the pastureland where a herd is raised, not just the amount of water they consume.

The cattle industry has additionally pointed out that nearly every part of a cow is used to make food and consumer goods, meaning that very little of the animal is wasted. With experts on both sides, this dispute will continue for the foreseeable future, as traditional meat producers and plant-based burger companies battle for market share.

Some environmentalist critics have alleged that growing the GMO soy utilized in the Impossible burger threatens biodiversity and exposes consumers to more pesticides. However, there is no evidence to back up either argument. GMO crops have a minimal impact on biodiversity because they require little or no tilling to control weeds and are typically treated with benign herbicides, protecting a variety of beneficial insects and plants from damage. Moreover, the pesticides used on soybeans, and every other commodity crop for that matter, are tightly regulated by the US Environmental Protection Agency, and regularly re-evaluated to ensure they don’t pose a threat to human health.

Related article:  What are GMOs?

Impossible Foods has been similarly lambasted by anti-GMO groups (and critics in the meat industry) over its genetically engineered burger. Activists such as Michael Hansen, a senior scientist with Consumers Union who is also on the board of the anti-biotechnology ETC Group, claims the plant-based meat substitute contains 46 “unknown” proteins that could present some undiscovered threat to human health, a view promoted by almost every food biotechnology critic. But as biologist Mary Mangan explained in response, many foods, including beef, contain proteins whose functions haven’t been determined yet. This doesn’t suggest that those foods are dangerous, as the FDA’s assessment and clearance-to-market of the Impossible burger confirmed.

Alternative meat has come under fire from critics who argue the increasingly popular products are “ultra-processed” and thus contain unhealthy amounts of sodium and fat and too many calories. This complaint has been challenged by alternative meat supporters. As retired University of Georgia food scientist Robert Shewfelt has noted, not all processed food is junk and not all junk food is processed. Processing describes a variety of techniques, such as freezing and packaging, designed to preserve the foods we eat; it doesn’t necessarily influence their nutritional qualities.

Second, a simple comparison of the nutrients in plant-based burgers and ground beef confirms they are remarkably similar. Nutritionists say Beyond and Impossible Burgers are unlikely to pose unique health risks.

In part because processing is poorly understood by most consumers, Shewfelt noted, “food gurus” and other activists have used the concept pejoratively to attack any ingredient they dislike. Breakthrough Institute scholar Alex Trembath has pointed out this opposition is usually born out of “antipathy towards mass-produced foods” and distrust of the corporations that make and sell these products.

Unlike an Impossible Burger, lab-grown meat is made from animals, but eliminates the need to slaughter pigs, cows and chickens. According to Leigh Ackland, professor of molecular biosciences at Deakin University in Australia, there are three primary steps required to make a burger in the lab. Scientists identify “starter cells” that can be turned into muscle, supply them with nutrients then grow them in a controlled laboratory environment. The process is in its infancy and food companies are still exploring how to scale it for mass production.

Lab-grown meat is still years away from commercialization, so not much is known about its eventual nutritional content. But since these products have to be constructed from cells, the nutrients in lab-grown burgers, steaks and fish could be manipulated to suit consumer preferences, experts have speculated. For example, burgers could be engineered to contain less saturated fat and fortified with vitamins, as is already possible with some gene-edited crops, such as soy.

While nutrition remains an open question, a fierce debate has broken out over the potential environmental impact of lab-grown meat, as it has with plant-based replacements. Proponents say cellular agriculture could reduce or even eliminate the pollution, animal rights abuses and carbon emissions that result from raising animals for food. They argue that “factory farming” isn’t sustainable as the global population continues to grow.

Critics challenge these views, however. Farmers reject allegations of animal abuse, arguing that humanely raising livestock makes them more productive. University of California, Davis animal geneticist Alison Van Eenennaam has maintained that growing animal cells in the laboratory is an energy-intensive process that could offset the environmental benefits of using less land and fewer agricultural inputs to raise animals. She also noted that animal agriculture accounts for less than four percent of all US greenhouse has emissions, so the environmental benefits of lab-grown meat (and plant-based meat) are far less than advertised.

For now, comparing the environmental impact of traditional and cellular agriculture isn’t possible, since lab-grown meat isn’t yet produced on an industrial scale. Currently available estimates are based on a variety of assumptions that may or may not prove correct.

Researchers, food producers and activists of various stripes will continue debating the nutritional and environmental merits of lab-grown and plant-based meats as there is much to learn about them. But these products are just the beginning of even more dramatic changes to how we produce food, meat in particular. Scientists are developing animal-free ice cream, bean-free coffee and many more foods and ingredients that popular culture has treated as science fiction. It’s important to remember just how much progress we’ve made in a relatively short period of time. As Trembath has noted:

[W]hen we find fault with a clearly beneficial innovation slotting neatly into modern food systems, perhaps the problem isn’t with the system, but with our own idealized vision for what an equitable, healthy, appealing food system should look like. Surely there are excesses and failures with the status quo â€¦. But â€¦. we might consider whether the systems we have designed over generations to feed billions of humans aren’t doing a relatively good job â€¦. After all, global hunger and undernourishment have been trending downward for decades, an achievement we should surely take into account.