A number of activists and opinion writers have recently argued that SARS-CoV-2, the virus that causes COVID-19, can be traced back to “industrial” and “intensive” agriculture. In a Sierra Magazine piece titled “Blame It on the Farm Too,” Ashia Ajani points a finger at “Western-influenced farming practices” as a main cause of our current zoonotic outbreak and possible further outbreaks.

But these claims offer no explicit argument for how a different form of agriculture — outside of calls to completely eliminate meat consumption — would reduce risk, and they often conflate intensive animal agriculture with intensive agriculture writ large. More fundamentally, these claims point in the wrong direction. If anything, intensification is the solution to reducing the risk of zoonotic disease, not the problem, mainly because it addresses the real underlying causes of zoonosis: land-use change and food insecurity.

First, we should put to rest the argument that COVID-19 has direct ties to factory farming. As most of us know, SARS-CoV-2 has been connected to a wet market in Wuhan, China where wildlife like pangolins, civets, and more were sold alongside butchered meat and other foods. Like SARS before it, the novel coronavirus is assumed to have its origins in bats, but was spread from bats to an intermediary host — potentially a pangolin — before infecting humans.

Intensification is the solution to reducing the risk of zoonotic disease, not the problem, mainly because it addresses the real underlying causes of zoonosis.

Many point to the conditions of the wildlife at the wet market — cages of live animals stacked on top of other live animals — as a perfect storm for zoonotic disease outbreaks, but the underlying cause is the consumption of wildlife. And as Elizabeth Maruma Mrema, the acting executive secretary of the UN Convention on Biological Diversity, explained to The Guardian, the hunger — often literally starvation — that drives consumption of wildlife ought to be cut off at the source, and until we can provide alternatives to wildlife trade and consumption, the problem will persist.

For some, the practice of wildlife consumption in China has direct links to the rise of industrial agriculture in the last quarter of the twentieth century. But the consumption of wildlife and exotic animals in China is historically rooted in food insecurity and, in fact, a failure to industrialize agriculture. According to journalist Brian Barth, Chinese consumption of wildlife stems from the 1970s decision to conclude the Maoist collective farming experiment — an experiment that saw severe famine and food shortages over the previous decades. The goal, instead, was to industrialize agriculture, but a lack of resources and funding meant that the state could not supply rural farmers with the means to industrialize and take advantage of economies of scale. Instead, those farmers who could not benefit from agricultural industrialization took up exotic animal farming as a new source of income.

As Chinese agriculture intensified throughout the following decades, exotic animals remained a part of certain regional diets. Up until the outbreak of the novel coronavirus, these animals were eaten both because of their cultural significance for traditional Chinese medicine, and as a means of demonstrating upward mobility and wealth.

The most important factor in the development of new zoonotic diseases is land-use change.

There is broad agreement in the epidemiological and virological studies of zoonoses that the most important factor in the development of new zoonotic diseases is land-use change. The development of wild lands, whether caused by agricultural extensification, mining, or other factors, simultaneously shrinks the habitat of wildlife and brings that wildlife in close proximity to human settlements. The combination of shrinking habitats, human-wildlife interactions, and food insecurity is a recipe for zoonosis. In West Africa, these three factors combined were responsible for HIV/AIDS and the slew of recent Ebola outbreaks.

Even when food insecurity and the consumption of wildlife are taken out of the equation, land-use change is a powerful driver of zoonotic disease, and has resulted in outbreaks of zoonotic diseases like malaria, yellow fever, dengue fever, Nipah virus, West Nile virus, Zika virus, and Lyme disease. Often, these diseases are transmitted from animals to humans through an intermediary, sometimes an insect (mosquitoes or ticks) and sometimes through livestock that live too close to wildlife populations, as was the case with Nipah.

Because the biggest driver of land-use change is agriculture, “intensive” high-yield agriculture often takes the blame, but the alternative — extensive, low-yield farming — would be worse. To prevent further pandemics, we must do as much as we can to stop land-use change while improving food security. We must, in other words, improve agricultural yields, allowing us to grow more food on less land. So, contrary to what many have asserted, a vital lever for limiting land-use change and providing cheap food for all is not to abandon intensive agriculture, but to intensify it further, especially in the developing world where food insecurity is greatest and where growing populations means rising food demand.

Related article:  If you survive the coronavirus, do you gain immunity? And for how long?

It is thanks to rising yields that farmers, globally, produce about three times the amount of crops while only using 13% more land than in 1950. For example, if yields from cereal production hadn’t increased since 1961, the global agricultural footprint would be 24% larger than it is today — increasing from roughly 50% at current levels to 62% of total habitable land — and would likely have resulted in even deadlier zoonotic outbreaks. 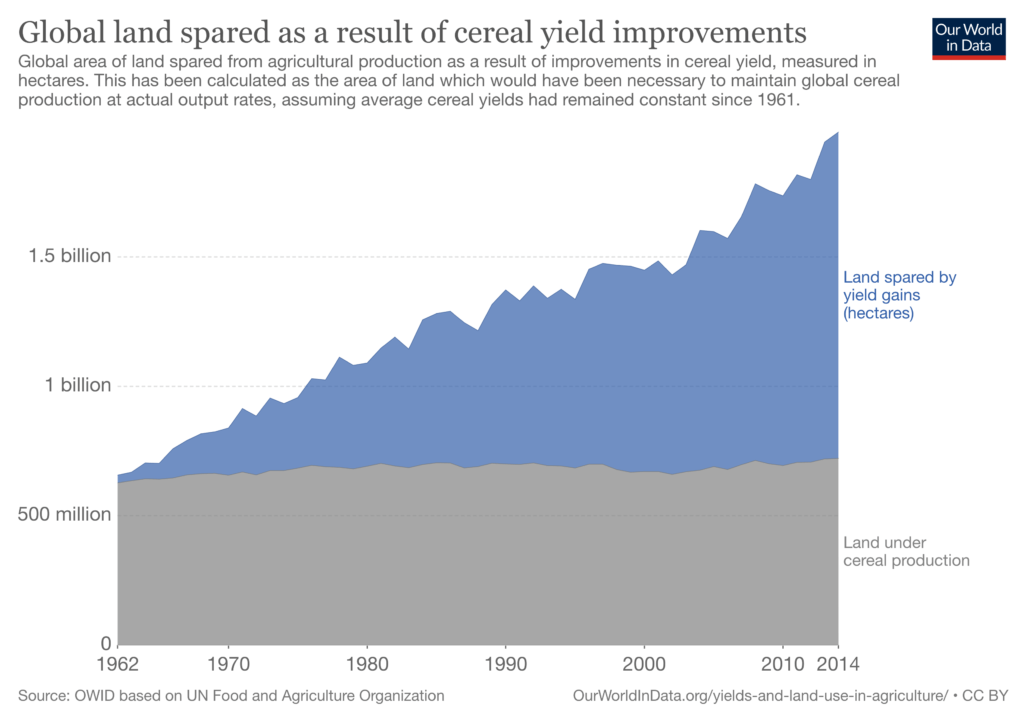 Alongside reducing deforestation and land-use change and improving food access and security, sustainably intensifying agriculture across the globe would benefit biodiversity by protecting habitats and keeping them from agricultural development. While monoculture means less biodiversity on farmland, the productivity gains of monocropping — and other intensive agricultural practices — allow for the sparing of far greater land that can be used as habitat for wild flora and fauna. Certainly, agricultural intensification alone is not enough to maximize land-sparing benefits, as improved conservation and land policy is needed to minimize rebound effects. But greater productivity is likely the longest lever for achieving ambitious conservation goals.

Because the biggest driver of land-use change is agriculture, “intensive” high-yield agriculture often takes the blame, but the alternative — extensive, low-yield farming — would be worse.

Worries about increased virulence of influenza strains and antibiotic resistance due to poorly managed low-dose usage of antibiotics on intensive animal agriculture are well-founded and downright scary. Alternatively, and potentially more importantly, animal agriculture, even the most intensive forms, requires huge amounts of land for either grazing animals or growing feed. In fact, beef production may be the largest driver of Amazonian deforestation. And, when animal agriculture encroaches on previously unmanaged wildlands, the risk of zoonotic diseases drastically increases as viruses can jump from wild to domesticated animals.

Technology has already helped improve the efficiency, sanitation, and health of cattle, pork, and chicken in the United States — for example, advances in veterinary and farm engineering have greatly reduced disease rates among american pigs — but there are many stones left unturned. Increased R&D, improved regulatory practices, and greater transparency are all clearly needed to ensure global meat production can be efficient, sustainable, and biosecure.

With our global population set to increase by close to 3 billion by 2050, we must strive to construct a world that can provide food, shelter, and livelihoods to all 10 billion people, while reducing risk of pandemics akin to what we see today. Simply, the only way forward is forward. We must continue to develop agricultural innovations that can allow for increased intensification, and we must give these innovations global reach. It does not work to just intensify agricultural production in developed countries, given the dual role of land-use change and food insecurity. To combat the main drivers of zoonotic diseases, we must sustainably intensify our food system, not pine for a romanticized and inefficient production system that brings people and wild animals in closer contact.