Farmers who grow biotech crops have earned an additional $225 billion and greatly reduced agriculture’s contribution to climate change, according to a just-released report examining the 22-year period 1996-2018, “GM crops: global socio-economic and environmental impacts 1996-2018.” As added benefits, biotech crop cultivation has limited the expansion of land use for farming and reduced pesticide use by 776 million kilograms, concluded Graham Brookes and Peter Barfoot of PG Economics, a London-based agricultural consulting company. Their research led to the publication of two peer reviewed papers, one on pesticide use and carbon emissions and the other on the impact on farms. 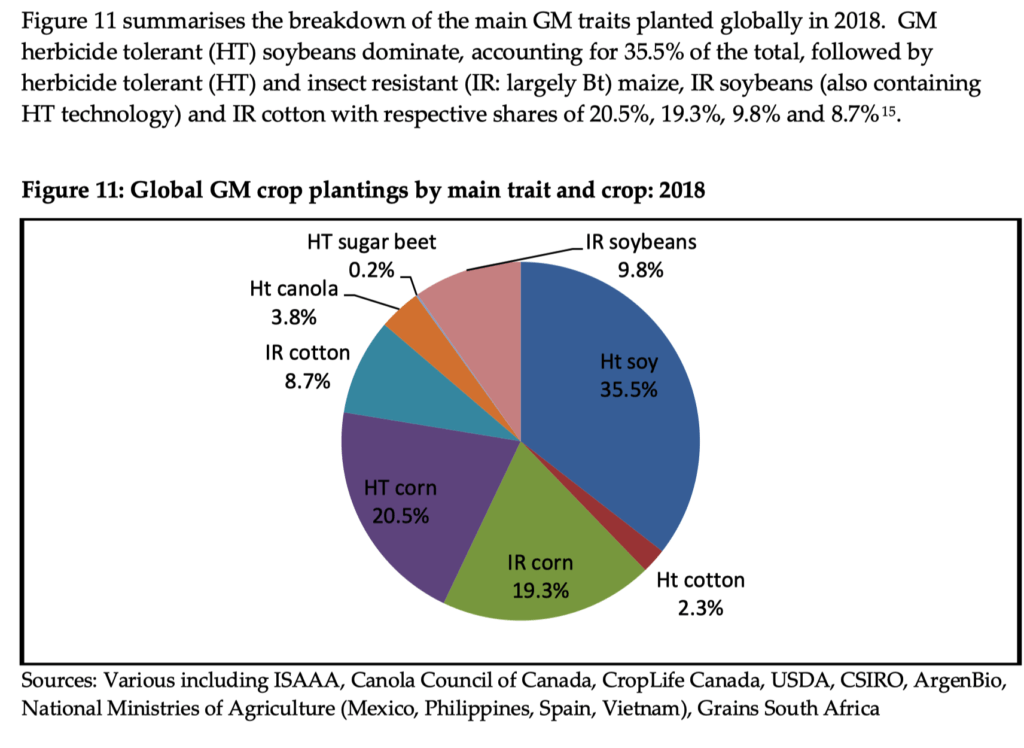 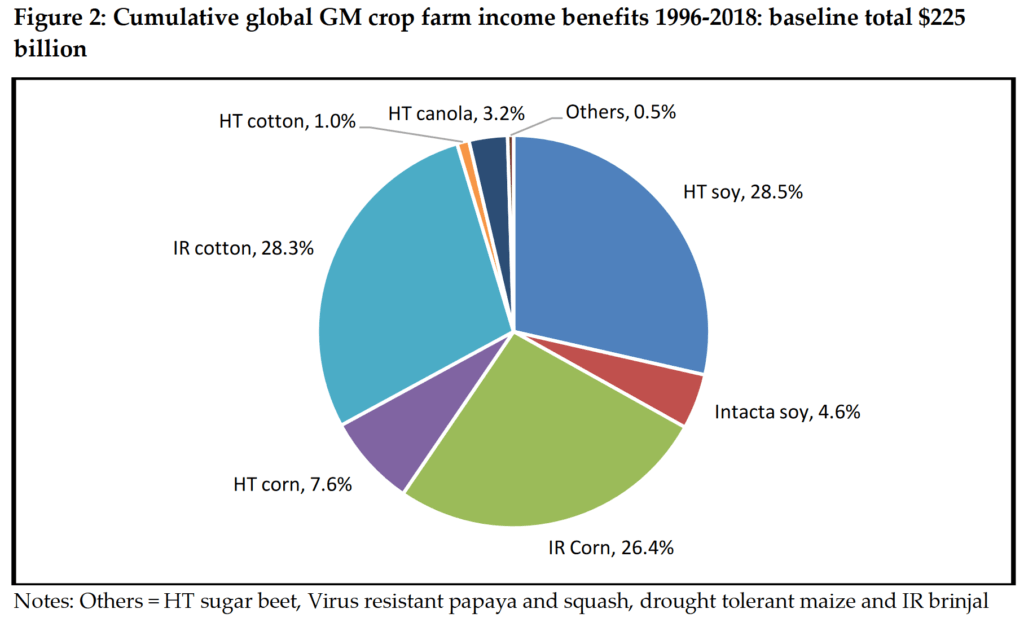 Commodity crop growers achieved dramatic gains over the two decades examined in the study, due to the impact of insect- and herbicide-resistant seeds, which minimize pesticide costs while effectively controlling destructive insects and weeds. Since 1996, biotech crops have increased corn farmer incomes by just under $60 billion; cotton growers saw a $65.8 billion increase and soy farmers earned an additional $64.2 billion over the same period.

Policymakers and consumers have put increasing pressure on farmers to reduce their carbon emissions as concerns about accelerating climate change mount. Biotech seeds have helped growers adapt to these demands by reducing fossil fuel use and tillage, both of which keep heat-trapping carbon dioxide out of the atmosphere. In 2018, for instance, farmers who cultivated genetically engineered crops reduced their CO2 emissions by 23 billion kilotons, the equivalent of pulling 15.3 million cars off the road.

Related article:  After centuries of failed attempts at breeding a blue rose, biotechnology does the trick

Concerns have also been raised about the environmental impact of pesticide use in farming, and here too biotech crops have made positive contributions, according to the new report. Overall pesticide use has dropped 8.6 percent since 1996, a reduction of nearly 800 million kilograms that cut the environmental impact of insecticides and herbicides by 19 percent. Insect-resistant seeds, which drastically reduce and sometimes eliminate the need for chemical spraying, were the biggest contributor to this trend. 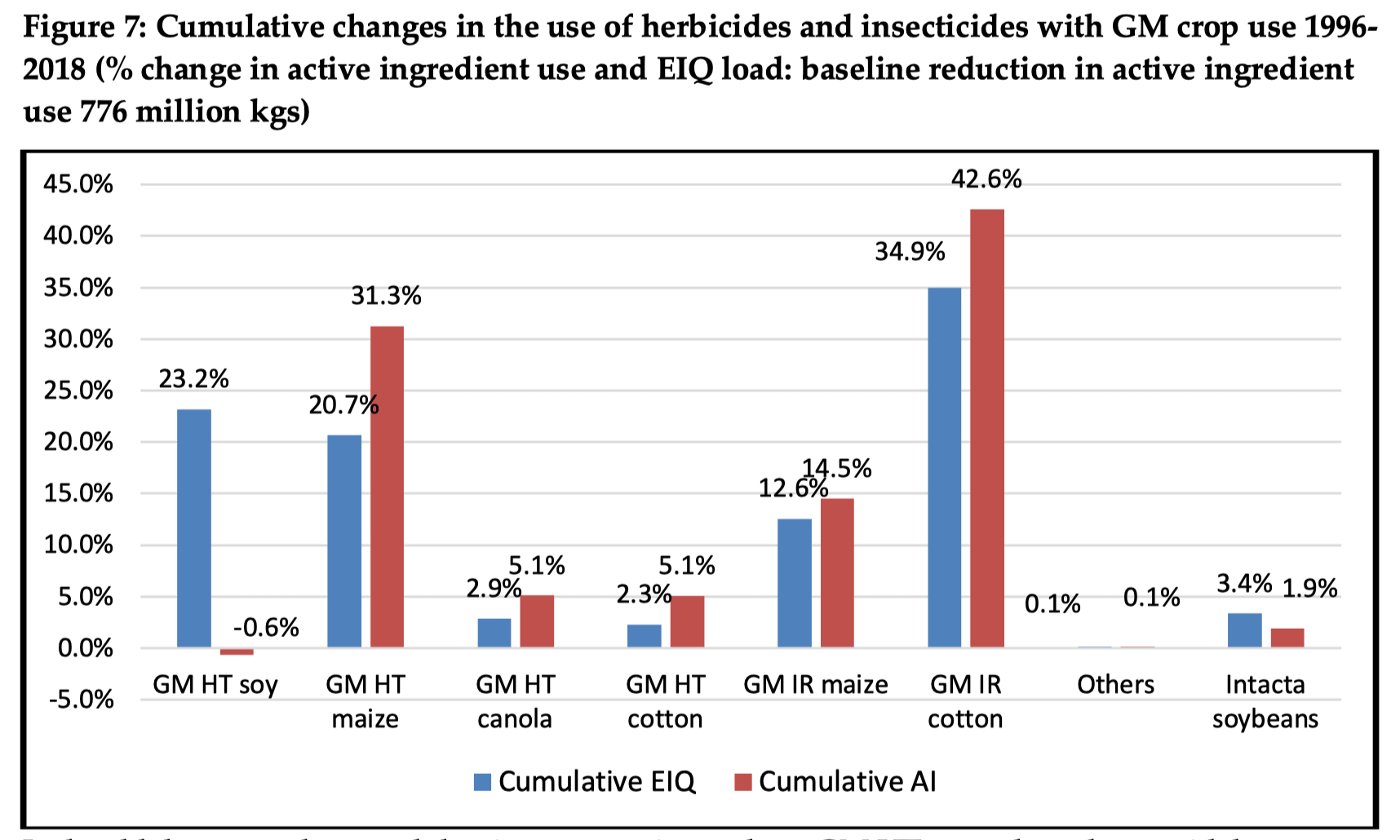 The primary side effect of controlling weeds and insects is higher crop yields, which in turn reduces the amount of land farmers need to cultivate. “Over 23 years of widespread use,” the authors noted, “crop biotechnology has been responsible for the additional global production of 278 million tons of soybeans, 498 million tons of corn, 32.6 million tons of cotton lint and 14 million tons of canola.” Without access to biotech crops, the authors added, American farmers would have had to cultivate an additional 14 percent of the arable land in the United States to maintain 2018 production levels. The finding confirms earlier research showing that biotech crops tend to reduce the amount of farmland required to produce the same amount of food.

According to Brookes, director of PG Economics:

GM crop technology continues to make an important contribution to reducing the environmental footprint of agriculture and securing global food supplies in a sustainable way. It has also helped lift many small, resource-poor farmers and their families in developing countriesout of poverty.