This article or excerpt is included in the GLP’s daily curated selection of ideologically diverse news, opinion and analysis of biotechnology innovation.
Biotech giant Bayer is currently in the fight of its life against more than 100,000 lawsuits alleging its flagship weedkiller Roundup (glyphosate) causes cancer. There is no sound scientific evidence to support such allegations, and every relevant research and regulatory authority in the world has concluded the herbicide poses no cancer risk when used appropriately by farmers. But Bayer, fearing for its financial well being, has opted to settle the bulk of the lawsuits (roughly 95,000) and is working to resolve the remaining cases, though the future of the litigation is uncertain.

This epic legal battle in the US tends to dominate the headlines, but the debate over glyphosate is an international affair. Multiple nations have attempted to institute glyphosate restrictions as a means of limiting the use of herbicide-resistant GMO crops, designed to be utilized with glyphosate. India recently proposed such a policy. And Mexico, building on earlier efforts to restrict GMOs, is moving perilously close to an outright glyphosate ban.

Simply put, Mexico’s proposed nationwide glyphosate ban is motivated by extremist ideology and utterly devoid of scientific justification. More importantly, it would be disastrous for Mexican farmers and consumers.

The current administration led by President Andrés Manuel López Obrador (AMLO) has created uncertainty about the future of genetically engineered crops in Mexico by refusing to approve any new biotech crop authorizations in over two years, since May 2018.

The president has also given important regulatory positions to former activists that have led anti-GMO campaigns, and to former leaders from environmental groups. The most prominent of these figures are the current science minister Elena Alvarez-Buylla and the head of SEMARNAT (Secretariat of Environment and Natural Resources) Victor M. Toledo. Both officials are former leaders of the Union of Concerned Scientists (UCS). Adelita San Vicente Tello, the director-general of the Primary Sector and Renewable Natural Resources at SEMARNAT—also linked to UCCS—is the former director of Seeds of Life (Semillas de Vida), an anti-biotechnology NGO that agitated to ban GMO corn in Mexico and invited Vandana Shiva, a darling of the anti-biotech movement, to speak several times.

With the help of environmental groups like Greenpeace, this alliance of activist-regulators has launched a new effort to ban glyphosate-based herbicides at the national level, linking the weedkiller with the use of GMOs in the country. Glyphosate is often paired with biotech crops, but the reality is that this herbicide was introduced to Mexico long before GMOs were ever planted in the country. It has also been used to control unwanted vegetation in parks and gardens for many years.

SEMARNAT announced on November 25, 2019 that Mexico had turned away a 1,000-ton cargo ship carrying glyphosate, citing “the precautionary principle of risk prevention” and making reference to scientific studies alleging glyphosate harms pollinators and damages the environment. The agency’s press release didn’t reference the large body of evidence showing that glyphosate poses minimal risk to the environment, pollinators included. According to Toledo, the head of SEMARNAT, the decision fulfilled “an urgent need to promote an agroecological public policy and reduce the harmful environmental, social and cultural effects of modern agriculture.” Toledo made strikingly similar pronouncements as an activist before joining SEMARNAT. He once declared , for example, that modern agriculture relies on “products harmful to human health, produces less nutritious food, and is responsible for global warming.”

Progress toward a ban

The campaign against glyphosate recently took a dramatic step forward with the announcement from Mexico´s Environment Ministry that glyphosate-based herbicides will be phased out of use in the country by 2024. While moving to ban glyphosate, regulators have simultaneously launched “education campaigns” to sway public opinion. They purportedly include data from independent scientific sources, but so far the infographics and materials shared through official channels have only disseminated myths and misinformation about the use and effects of the weedkiller on human health and the environment.

As part of the government strategy to gradually reduce the use of glyphosate-based herbicides in the country, Adelita San Vicente said that the National Council of Science and Technology (CONACyT), is analyzing possible alternatives to replace the popular weedkiller. However, CONACyT’s budget has been cut and shifted to funding mostly social science research, thus eliminating support for basic scientific studies that could lead to new herbicides. The only other “alternatives” on the table are the techniques that have been applied by farmers and indigenous communities for thousands of years, mainly massive amounts of manual labor in the fields to remove weeds. There are other options for some growers, but none are very good, as we’ll see.

The impact on farmers

According to experienced Mexican agricultural scientists, glyphosate is the only effective option that most farmers can afford. Although Monsanto (now owned by Bayer) initially developed and sold glyphosate exclusively, its patent has expired and 56 companies in Mexico use the herbicide in their weed-control products, which are widely distributed to small and large farms.

Alfredo Gutierrez, an agronomist and fifth-generation dairy farmer in the central region of Mexico, recently reported that if he and his colleagues lose access to glyphosate (which they use while growing feed for their milking cows), they will replace it with several other herbicides, which are more expensive and potentially more toxic. Gutierrez also mentioned that controlling weeds manually is not viable due to the higher associated labor costs. Some farmers might therefore turn to controlled burns as a weed-management strategy, a practice that carries a variety of risks including wildfires. 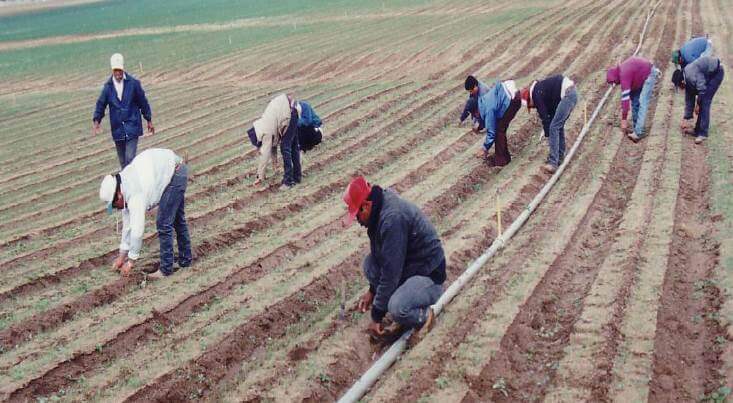 Farmers have rapidly adopted glyphosate and resistant crop technology for three main reasons: cost savings, better weed management, and simplicity of use. As has been reported by national newspapers in Mexico, 73 percent of farmers have used glyphosate over the last 40 years to control more than 100 types of weeds that affect crops such as corn, sorghum, beans, citrus, coffee, sugar cane, avocado, and tomato.

If the remaining herbicide reserves run out, these crops are going to suffer because they’ll have to compete with once easily controlled weeds for nutrients, water, and sunshine—reducing their production between 30 and 40 percent, according to Cristian García de Paz, executive director of the Crop Protection, Science and Technology Organization (PROCCYT). Just like higher production costs, lower yields affect not only the seven million farmers and producers who utilize glyphosate, but also the public, who will pay more for foods that are widely consumed in Mexico.

The illegal market for agrochemicals in Mexico is going to get a shot in the arm when a glyphosate ban takes effect, representing a real threat to farmers, consumers, and the environment. Regulatory oversight would normally ensure the composition, concentration, and efficacy of the product. But black-market pesticides aren’t subject to rigorous review by independent experts. Farmers won’t know if these chemicals are dangerous to human health or how they’ll impact soil health, pollinators and other wildlife.

There is a general feeling in Mexico’s farming community that this decision is rooted in ideological thinking rather than real scientific concern regarding the safety of glyphosate. Officials who support the ban have discarded a lot of evidence that supports the safe use of glyphosate and considered only the research that justifies their desire to ban the weedkiller. The activists in key positions at SEMARNAT and the Secretariat of Agriculture are taking advantage of the bad publicity glyphosate and Bayer have received from the mainstream media, pushing this ban to serve an agenda to ban GMOs instead of looking out for the common good of farmers. This is the administration’s first step in a long-term plan to promote agroecology, a term often used to describe organic farming practices.

Currently, the discussion about a glyphosate ban in the country is being had by the National Agricultural Council (CNA) and SEMARNAT. It will be crucial to focus the dialogue on the scientific evidence, because more than 130 million Mexicans rely on farmers for sustenance. If their productivity is stifled by this arbitrary decision, Mexico will be obligated to import food that is usually produced locally, moving the country further away from food security—one of the strongest campaign promises made by the current government.