This article or excerpt is included in the GLP’s daily curated selection of ideologically diverse news, opinion and analysis of biotechnology innovation.
An eccentric theory of human seagoing migration—made famous by one of the most insanely suicidal ‘scientific’ experiments ever undertaken—has recently resurfaced with a splash.

In 1947, as recounted in the international best-seller The Kon-Tiki Expedition, Norwegian explorer Thor Heyerdahl and five companions voyaged from Peru to Polynesia aboard a handbuilt balsa-wood raft, the eponymous Kon-Tiki. A seventh crew member, the Spanish-speaking parrot Lolita, was sadly lost at sea enroute.

This epic 8000 km odyssey was undertaken to test Heyerdahl’s pet hypothesis that the first inhabitants of the Pacific islands were native South Americans. And, by smashing into a reef in the Tuamotu Archipelago after 101 days at sea, Kon-Tiki’s crew (minus poor Lolita) had at least proved this theory possible. 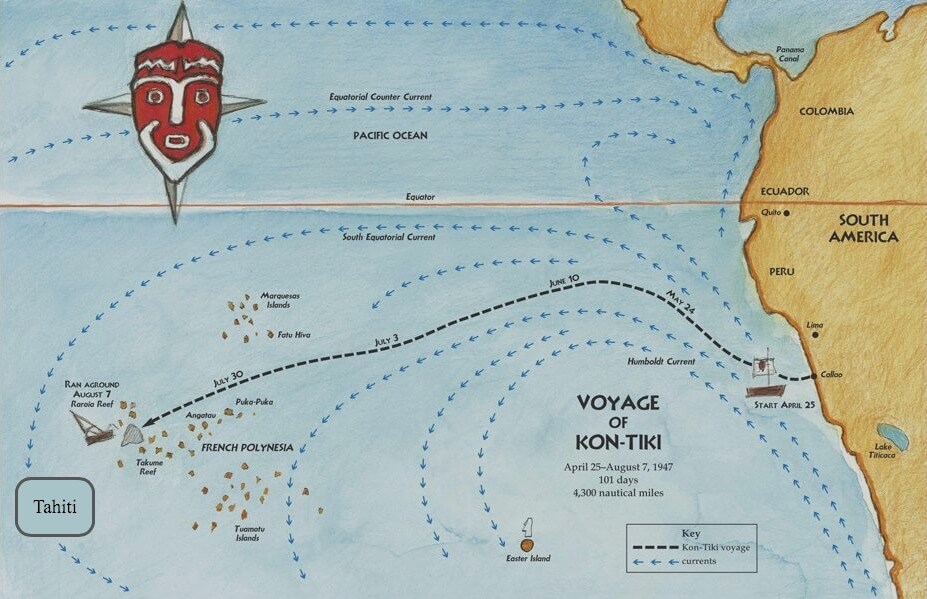 Possible, yet improbable. Even at the time, the established scientific consensus—backed by an impressive mass of linguistic and archaeological evidence, and amply reinforced by subsequent genetic research—had long pointed to island Southeast Asia (modern day Indonesia, the Philippines and Taiwan) as the ancestral homeland of the first peoples of the Pacific.

That is, until an explosive paper, published in the journal Nature in July 2020, claimed to have found “conclusive evidence for prehistoric contact” between Polynesians and Native Americans, one that likely followed “a single contact event … in eastern Polynesia” (emphasis added). Based on what they say are “limited molecular genetic studies”, the paper’s authors—population geneticist Alexander Ioannidis and colleagues—raised “the intriguing possibility that [later arriving] Polynesian settlers encountered a small, already established, Native American population”.

News of these startling findings flashed around the world; it seemed that Thor Heyerdahl had been right all along!

Certainly the Kon-Tiki theory features heavily as corroborative evidence in the Nature paper; for example, like Heyerdahl, Ioannidis and his co-authors make much of an intriguing linguistic connection between Polynesia and South America:

[Other] evidence has come from the Polynesian word for the sweet potato, ‘kumala’. This word has been linked to names for the food in northern South America, where it originated. (Ioannidis et al.). [O]n all the widely scattered South Sea Islands the name of the sweet potato is kumara, and … kumara is just what the sweet potato was called among the old Indians in Peru. The name followed the potato across the sea. (Heyerdahl).

Indeed, the presence of cultivated South American crops (such as potatoes and bottle gourds) in prehistoric eastern Polynesia was a central plank in Heyerdahl’s thesis:

In the South Sea islands the potato will only grow if carefully cultivated by man, and as it cannot bear sea water it is idle to explain its wide distribution over these scattered islands by declaring it could have drifted over 4000 sea miles with ocean currents from Peru.

Of course, another possibility exists, one that Ioannidis and company offer as an “alternative explanation”: namely, “that a group of Polynesian people voyaged to northern South America and returned together with some Native American individuals, or with Native American admixture”.

Why this is mooted only as an alternative (and by implication, less likely) account is not made clear. After all, as the Nature paper itself acknowledges, the estimated date of this contact (c. 1200AD) was also the time “when Polynesian explorers were … making their longest-range voyages” and when “Polynesian settlers discovered all remaining island groups in the Pacific, from Hawaii to New Zealand to Rapa Nui”. Why these incredibly accomplished explorers failed to ‘discover’ a landmass the size of South America goes unexplained.

Nevertheless, in a news article that accompanied the genetic paper, Nature acknowledged that “Some researchers have proposed that Polynesians voyaged to the coast of South America”.

It is difficult to overstate how much of an understatement this is. Compare, for instance, the overwhelming evidence of long-distance Polynesian migration across the Pacific, or the genetic evidence of “[a] Polynesian origin” for archaeological chicken remains in Chile, with the underwhelming counterclaim by one of the co-authors of the original Nature paper: “Maybe a small raft of Native American sailors got adrift into the Pacific.”

Related article:  2 million years ago, we lost this gene. That may be why humans are so prone to heart attacks

As some of the immediate critics to this ‘east-to-west’ thesis put it, “the evidence doesn’t stack up” against the far more credible idea that Polynesians had reached South America first.

Indeed, some of the strongest circumstantial evidence against the Americas-to-Polynesia thesis comes from the pages of The Kon-Tiki Expedition itself. Take, for example, Heyerdahl’s response to Lolita (the unfortunate parrot crew-member) being washed off the raft by an unexpected wave, two month’s into the voyage:

“When we discovered that the parrot had gone overboard, it was too late. … [T]he Kon-Tiki could not be turned or stopped; if anything went overboard from the raft, we had no chance of turning back for it—numerous experiences had shown that.”

The fact that Heyerdahl and his crew didn’t all share Lolita’s fate was largely down to luck. Even after surviving the rigours of the open ocean, the crew’s inability to properly steer the raft saw them almost killed when they hit the reef that ended the voyage—and this after twice being swept helplessly past two previous islands. Hardly compelling evidence of the viable South American settlement, complete with cultivated potatoes, implied by the recent Nature piece.

More troubling, however, is the actual basis of the Kon-Tiki theory, which followed Heyerdahl’s year-long stay on Fatu Hiva, an island in the Marquesas, French Polynesia, in the 1930s. According to Heyerdahl, “Legends of mysterious white men, from whom the islanders were originally descended, were current all over the Pacific”. His own subsequent research (published in book form in 1952) traced these strange white men to Peru, where, he claimed, the legends of the “Inca Indians” described “a race of white gods”:

[W]ise, peaceful instructors, who had originally come from the north in the morning of time, and had taught the Inca’s primitive forefathers architecture and agriculture, as well as manners and customs. They were unlike other Indians in having white skins and long beards… Finally they left as suddenly as they had come… the white teachers vanished forever from the coast of South America and fled westward across the Pacific.

This benevolent and intelligent white race, Heyerdahl came to believe, had then settled the Pacific islands— thus also explaining another ‘puzzle’ that he mused over while aboard the Kon-Tiki:

Whence had the Polynesians obtained their vast astronomical knowledge, and their calendar, which was calculated with astonishing thoroughness? Certainly not from Melanesian or Malayan people to the westward. But [from] the same old vanished civilised race, the ‘white and bearded men’, who had taught the Aztec, Mayans, and Incas their amazing culture in America…

Clearly, the idea that such “vast astronomical knowledge” could have developed among the Polynesians themselves was not an option. If we adopt Nature’s understated style, we could perhaps describe Heyerdahl’s beliefs, and the Kon-Tiki thesis itself, as a condescending conspiracy theory (though stronger criticisms might also spring to readers’ minds). The point is, for all the publicity that The Kon-Tiki Expedition generated, it was never good evidence for South American settlement in the Pacific—nor strong support for the latest theory of “a first contact event in eastern Polynesia”.

Yet it is perhaps the lure of publicity that explains the otherwise baffling claim that an east-to-west migration is a likely explanation for the recent genetic evidence of Polynesian/South American inter-breeding. To an American audience especially, the news of native Americans sailing to the Pacific Islands is attention-grabbing, unlike the more probable but less noteworthy alternative: that Polynesians first reached the Americas before returning, bearing potatoes and partners, to the Pacific Islands.

This is not to detract from Heyerdahl and his crew’s epic adventure (even today, the Kon-Tiki Expedition is a gripping read). And it is hard to disagree with the Norwegian adventurer’s broad claim that: “I have challenged a lot of old dogma, and this has stimulated a lot of discussion. And in science you need discussion.”