Viewpoint: Promoting CRISPR crops at the expense of GMOs to appease activists undermines both technologies

This article or excerpt is included in the GLP’s daily curated selection of ideologically diverse news, opinion and analysis of biotechnology innovation.
In the span of a few short years, gene editing has allowed scientists to begin rapidly and cheaply improving food production in ways that benefit farmers and consumers. Examples range from heart-healthy soybeans to chemical-free pesticide alternatives, and many more powerful applications have already been approved by regulators. Such important developments are poised to continue provided technophobic consumers and politicians can be convinced that CRISPR and other gene-editing tools ought to be regulated with a light touch.

With this in mind, many science advocates has resorted to defending the safety and efficacy of gene editing by distinguishing it from older transgenic (GM) genetic modification technology, which often involves transferring DNA between unrelated organisms and invites charges that scientists are “playing god” and breeding “Frankenfoods.” The logic is that gene editing can be spared the PR nightmare GMOs endured if the public can be convinced that the former is more natural—“it’s just plant breeding but much faster”—than the latter. 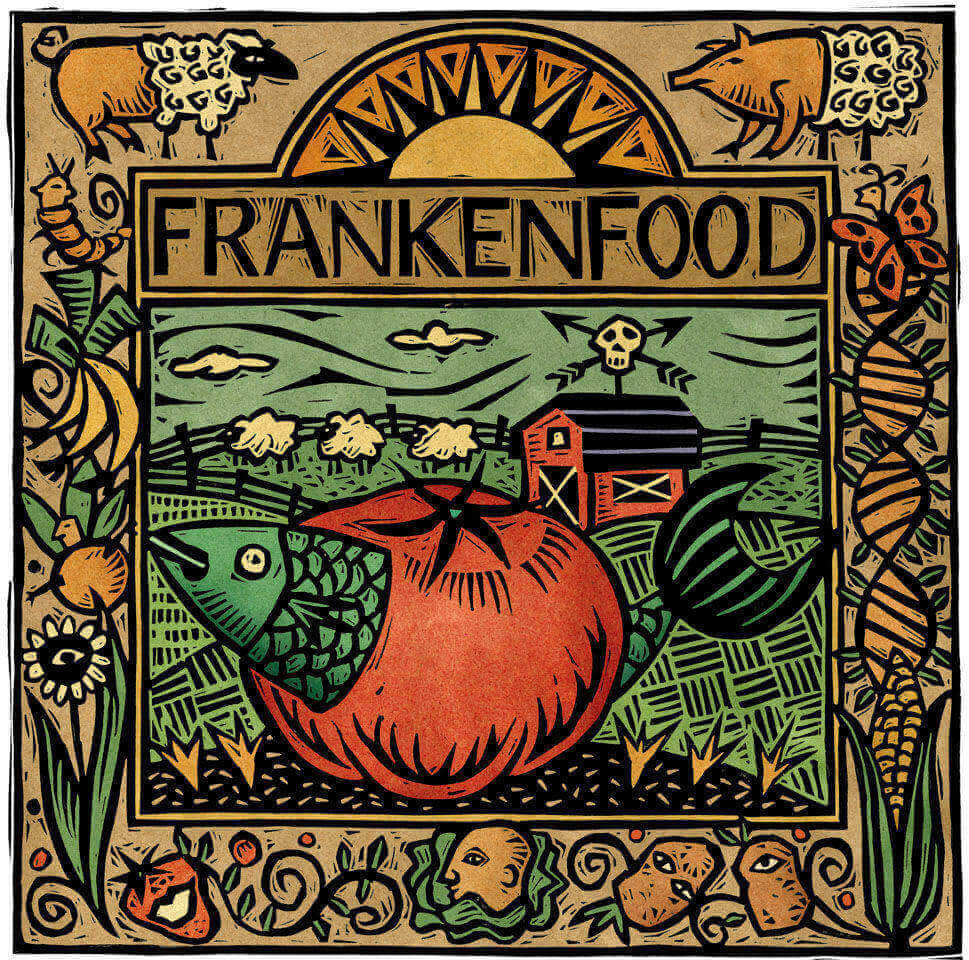 This is a well-meaning but ultimately misguided approach to advancing gene editing. The truth is that both GM and gene-editing technology have important roles to play in our efforts to make farming more sustainable. Promoting CRISPR at the expense of GM makes this sustainability goal harder to achieve and further solidifies the public’s unjustified fear of genetic engineering (GE) more generally.

Looking back through history, we can see that genetic engineering broadly defined has been around us since the beginning of agriculture. In fact, the crops that we all know today were originated through sporadic mutations from their wild relatives, and these mutations were used by ancient farmers to artificially select plant varieties with desired characteristics. Gradually, after thousands of years, individual domestication efforts in different regions  created corn, potatoes, chili, wheat, eggplant, soybean, cotton, among the many other crops consumed globally.

With the emergence of genetic modification, plant breeding received an important shot in the arm, improving a process that use to take hundreds of years: getting a desired trait or several traits into the same crop. Now, it only takes a few years. But the improvement did not stop with GM crops, usually referred to as transgenics (though technically not all GM products are transgenic). Scientific research has been unstoppable, and in recent years experts have developed gene-editing tools such as CRISPR/Cas-9, leading to a new generation of crops with improved traits. 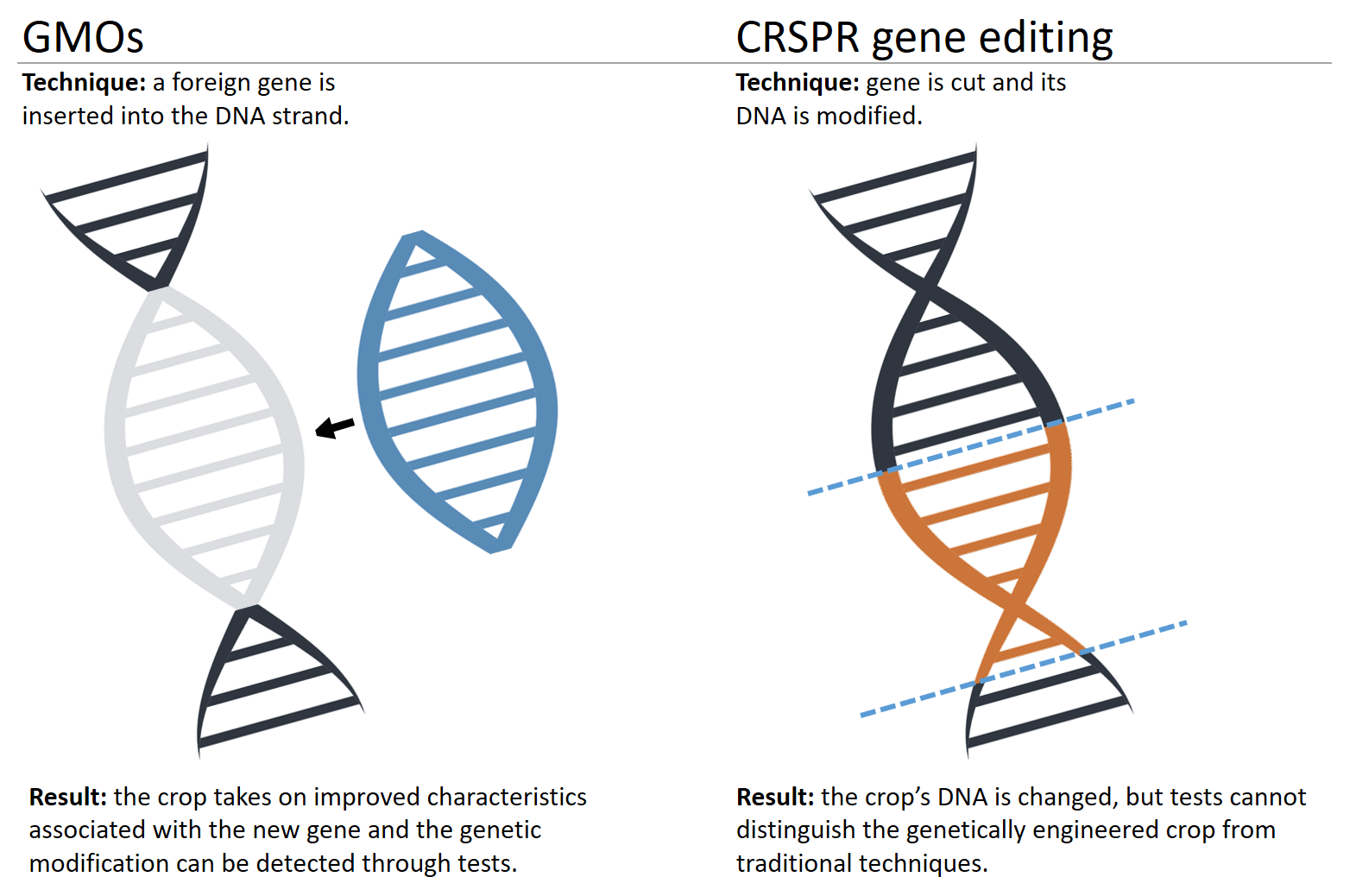 Due to the simplicity of the technology and its low cost, these crops are being gene-edited to target the specific needs of farmers and consumers. In comparison to GM crops, the diversity of gene-edited plants is wider since they are being developed with a more regional approach, and this effort is being driven by multiple actors, including big biotech firms, small and midsize companies and public universities around the world.

Despite the promise of gene-editing technologies (also known as new breeding techniques or NBTs), existing GM products do not need to be replaced. Farmers face a wide array of challenges, most notably climate change, and a growing population that increases global food demand every year. We need all available tools  to tackle these problems.

A new narrative about genetic engineering

As more gene-edited crops are commercialized, they will become useful tools for farmers, but there will be situations where transgenics or conventional crops will better fit the needs of a specific growing region; showcasing this diversity of technologies to the public may help shift the existing narrative around crop biotechnology, helping consumers recognize the need for all kinds of GE products, including transgenic crops. Given the messy history surrounding the GM debate—especially the public’s misconception that so-called  “natural” products are safer and more nutritious—this isn’t an easy task; science communicators find themselves in an awkward situation, as Kevin Doxzen and Hope Henderson, researchers at  the University of California’s Innovative Genomics Institute, explained  in a recent commentary:

“Mutation of a few nucleotides is a frequent occurrence in the wild and a driver of evolution. This similarity between natural evolution and CRISPR genome editing is an angle which can separate CRISPR-edited crops from GMOs. The argument that CRISPR genome editing can produce genetic changes that mimic evolution begins to associate these crops with the concept of “naturalness” …. The historical framing of GMOs has forced consumers to question what is natural, but will science communicators create a new narrative for CRISPR-edited crops or work to challenge the preconceptions of the modern consumer?”

The correct approach, according to Doxzen and Henderson, is to challenge the preconceptions. This would give researchers a second chance to address the public’s lingering concerns and reiterate a crucial point about the safety of genetic engineering: just about all the foods you consume (even the “natural” products) are the result of years of careful crop breeding research. If you find any of these items in your local supermarket, it’s because they’ve been thoroughly studied and shown not to pose a risk to human health or the environment, however they were produced.

Taking the initiative in this way will allow scientists to capitalize on the media’s interest in gene-editing (especially in light of genetically engineered COVID vaccines) and perhaps finally get ahead of hostile anti-GMO groups that have controlled the narrative about crop biotechnology for over two decades, preventing them from poisoning the regulatory conversation around NBTs.

A new conversation may lead to better regulation

When NBTs emerged several years ago, one of the first questions raised was whether a new framework was needed to regulate gene-edited crops. So far, good portions of Latin America the US, Canada and several other nations regulate them as conventional crops, generally following a risk-based, case-by-case assessment model to determine a product’s regulatory status. The European Union, meanwhile, considers gene-edited crops GMOs, making them prohibitively expensive to develop.

Reframing the conversation about genetic engineering with the public may give scientists an opportunity to promote sensible regulation of both GM and gene-edited crops in Europe. Instead of accepting the EU’s premise (that GM products require heightened regulatory scrutiny) and arguing that gene-edited plants don’t need the same level of oversight, scientists should argue for the relative safety of gene editing, then make the same case for older transgenic technologies.

Europe’s regulatory framework requires that gene-edited products be regulated because they are gene edited. As a rule, though, it’s not possible to distinguish gene-edited and conventionally bred crops. The only sensible alternative is to evaluate the potential risks the new products carry. There is as of yet no evidence that gene-edited crops are uniquely harmful to human health or the environment, and thus no need for excessive regulation. But if we’re going to evaluate gene editing in this way, why have a separate standard for GM crops?

The inevitable challenge will come from activist groups: we can distinguish GM plants from conventional crops, and we still don’t know if the former are dangerous. But remember our point above that all plant-breeding methods are technically “genetic engineering” and produce useful crops for different situations. Furthermore, recall that we have data from more than 25 years of GM crop cultivation and consumption globally confirming that they’re not any more dangerous than conventional crops.

If scientists can reframe the discussion as an assessment of genetic engineering’s risks versus its benefits based on real-world data, then the EU’s assumption that GE plants are inherently risky is obviously unjustified. Farmers and consumers may then get the chance to select from all the different GE products that are available, knowing they have been carefully tested by regulators.

This of course is not a new argument. Researchers have been making the same case for transgenic crops for many years. The point here is that science communicators need to be logically consistent in advocating for all genetic engineering tools, and the advent of CRISPR gives them the chance to do so. Doxzen and Henderson summed up why this is essential:

Describing how CRISPR-edited crops are arguably more natural than GMOs, or how these crops could potentially use fewer chemicals than their GMO predecessors reinforces pervasive societal suspicions of GMOs. If we think that engineered crops will play a key role in addressing environmental and public health issues, then promoting CRISPR-edited crops at the expense of GMOs is short-sighted.

Instead, we must use CRISPR as a new avenue for renewing productive discourse with the public …. Placing CRISPR on a pedestal while dismissing other approaches will not help advance either the scientific field nor constructive engagement with the public.