This article or excerpt is included in the GLP’s daily curated selection of ideologically diverse news, opinion and analysis of biotechnology innovation.
Genetically modified (GM) organisms and crops have been a feature of food production for over 30 years. Despite extensive science-based risk assessment, the public and many politicians remain concerned with the genetic manipulation of crops, particularly food crops. Many governments have addressed public concern through biosafety legislation and regulatory frameworks that identify and regulate risks to ensure human health and environmental safety. These domestic regulatory frameworks align to international scientific risk assessment methodologies on a case-by-case basis.

Regulatory agencies in 70 countries around the world have conducted in excess of 4400 risk assessments, all reaching the same conclusion: GM crops and foods that have been assessed provide no greater risk to human health or the environment than non-GM crops and foods. Yet, while the science regarding the safety of GM crops and food appears conclusive and societal benefits have been globally demonstrated, the use of innovative products have only contributed minimal improvements to global food security.

Regrettably, politically-motivated regulatory barriers are currently being implemented with the next genomic innovation, genome editing, the implications of which are also discussed in this article. A decade of reduced global food insecurity was witnessed from 2005 to 2015, but regrettably, the figure has subsequently risen. Why is this the case? Reasons have been attributed to climate variability, biotic and abiotic stresses, lack of access to innovative technologies and political interference in decision making processes.

Abiotic and biotic stresses on crops reduce yields. Numerous studies in Africa have shown the devastating effects uncontrolled and less-than-optimally-controlled weeds can have on crop yield (Akobundu 1980; Carson 1976; Chikoye et al. 2004; Atera 2012). According to Kent et al. (2001), the principal limiting factor to farm size in Africa is the number of necessary weedings during the period following planting and Marais (1992) argues that poor weed control is the single biggest contributor to low maize yields for smallholder farmers in Africa.

In 2020, plagues of locusts in eastern Africa devastated crops destined for human food purposes, with one estimate indicating that one swarm of locusts can eat as much in one day as 35,000 people (Gilliland 2020). Without control mechanisms, such as herbicides and insecticides, millions can be at risk of food impoverishment. The advantage of herbicide tolerant and insect resistant GM crops is that farmers no longer have to control weeds by hand and insecticide applications are significantly reduced.

GM crops have been shown to have yield increasing benefits due to the reduction in abiotic and biotic stresses. Shelton et al. (2020) examined the adoption of Bt brinjal in Bangladesh, finding yield increases of 20%, compared to non-Bt brinjal. A similar assessment of GM corn adoption in Vietnam, found yield increases of 30% (Brookes and Dinh 2021). With higher yields from GM crops being confirmed, there is also evidence they contribute to reductions in poverty, which is the number one objective of the United Nation’s Sustainable Development Goals.

While the advantages and benefits of commercializing and producing GM crops are increasingly being quantified, the lack of sound alternatives or benchmarks to discern what the impacts of not adopting GM crops are, is lacking.

Improving food security in the coming decades, is a global priority as the FAO has estimated that yield increases of 70% are required, with increases of 100% required in some countries (FAO 2005). With GM crops having undergone thousands of risk assessments in over 70 countries, without the quantification of a single risk factor being any different from an equivalent non-GM crop variety, the time has come to set aside the politics from food security and begin the logical inclusion of these safe, higher yielding crop varieties as part of the global strategy to ensure the UN’s top two SDGs, poverty reduction and zero hunger, are achieved.

As climate changes have been predicted to have an increased adverse impact on food production, new plant breeding technologies that are demonstrating preliminary yield increases, should not be subject to the politically motivated campaigns to restrict or ban these technologies. The future of reducing food security relies on having a well-stocked toolbox, capable of offering higher yielding varieties by every means possible.

The science and politics of regulating future food security innovations

The common conclusions in these opinions by scientific organizations include imposing regulatory scrutiny based on the documented risks of the product, rather than on the process used to breed them. Another common conclusion holds that many products of genome editing may warrant no additional regulation beyond those for conventional plants, if they could have been generated using ‘conventional’ methods of breeding or lack DNA segments over 20 base pairs originating in incompatible species.

Regrettably, the science-based recommendations to achieve reasonable safety outcomes are often ignored or marginalized in favor of political agendas (Masip et al. 2013; Smyth 2020). These are often based on the flawed assumption that genetic changes made in a laboratory are inherently riskier than the same changes made by nature, as genes naturally mutate from one generation to the next. 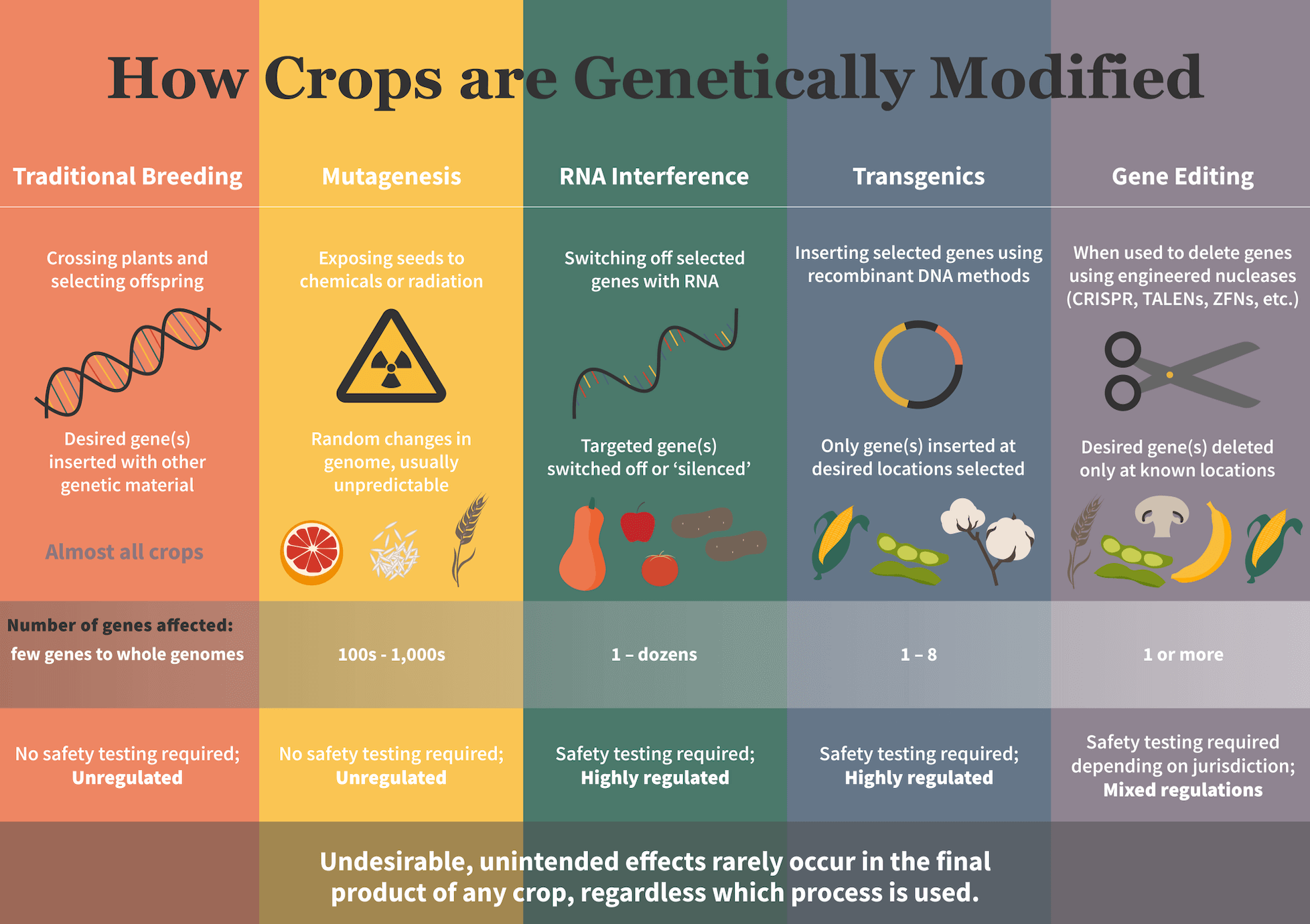 Furthermore, genetic changes directed by humans in a lab are assumed, again falsely, to be inherently ‘unnatural’ which also implies higher risk. Indeed, some of the statutory and regulatory language is patently unscientific. One common example is the European Union (EU) definition of ‘GMO’ as being “an organism … in which the genetic material has been altered in a way that does not occur naturally by mating and/or natural recombination”, thus capturing all agricultural products of genetic modification, including those using Agrobacterium as a vector (EU Directive 2001/18/EC). However, Kyndt et al. (2015) has shown ordinary, natural sweet potatoes carry Agrobacterium DNA fragments in its genome, inserted by a natural recombination process thousands of years ago. Clearly, genome transfer, even across the ‘species barrier’ is a natural process.

To further the global rejection of GM crops, ENGOs have waged deliberate campaigns of misinformation (Ryan et al 2020; CAST 2020). The Genetic Literacy Project (2020) has extensively tracked the flow of money, estimating that as much as US$850 million was spent by ENGOs between 2012 and 2016. With the opposition to GM crops beginning in the late 1990s, billions of dollars have been wasted lobbying against proven, safe, yield enhancing crop varieties, that would have been better invested in research on improving crop varieties.

Given the total lack of verifiable scientific quantification of risks from GM crop production and consumption, this opposition is entirely politically motivated. One example of this opposition has been the relentless campaign by Greenpeace against Golden Rice. Golden Rice has been biofortified to provide increased vitamin A, the lack of which leads to blindness and childhood death. Research by the International Rice Research Institute, the Philippine Rice Research Institute and the Bangladesh Rice Research Institute, indicates that 30–50% of vitamin A requirements could be provided by Golden Rice (Swamy et al. 2021). To illustrate the lack of humanity resulting from Greenpeace’s actions, 157 Nobel Laureates signed a public letter calling on Greenpeace to end their opposition to Golden Rice.

Impacts of political interference on the future of food security

Moratoriums, prohibitions and bans have a lengthy history of failure, whether it be alcohol or tobacco, none have worked. The same is evident for bans on GM crops, farmers are connected to informed networks that share the results of GM crop production, driving demand for access to these yield enhancing crops. Politically motivated bans to the technology harm adopting countries in numerous ways.

Removing the politics from food security would allow governments to approve GM crops for domestic production, providing benefits to their own farmers and reducing the import costs of foreign commodities and products.

The safety of GM crop production and consumption is scientifically quantified through the publication of hundreds of peer reviewed journal articles and numerous assessments by domestic scientific bodies, many of which have been done in the EU, all of which support the thousands of risk assessments conducted by independent federal regulatory agencies on GM crops that found no difference in risk between GM and non-GM varieties.

With 25 years of GM crop consumption, all without any evidence of harm to human health or the environment, it is blatantly evident that opposition to the commercialization of GM crops is not grounded in scientific evidence, but rather political opportunism.

If food insecure countries have any hope of overcoming their domestic food supply challenges, they need to firmly reject the deliberate ENGO campaigns of disinformation and misinformation and approve yield enhancing GM crops. ENGOs that remain opposed to GM crops with the abundance of evidence and safety are entering dubious territory as to the ethics of their sustained opposition. Perhaps the time has come for the world to ask, ‘Is it ethical to be opposed to increased food security from GM crops’?

Stuart J. Smyth is a professor in the Department of Agricultural and Resource Economics and holds the Industry Funded Research Chair in Agri-Food Innovation at the University of Saskatchewan. Follow him on Twitter @stuartsmyth66

Jon Entine is the founding editor of the Genetic Literacy Project, and winner of 19 major journalism awards. You can follow him on Twitter @JonEntine

Drew Kershen is a professor emeritus of agricultural law at the University of Oklahoma College of Law.

Carl is the Center Director for the Center for Risk Communication AUSTRALASIA.

Wayne Parrott is a professor of crop sciences in the University of Georgia’s College of Agricultural and Environmental Sciences. Find Wayne on Twitter @ProfParrott