In 2013, when PLoS One published a research paper, Complete Genes May Pass from Food to Human Blood, anti-GMO activists claimed they had proof that GMOs can “transfer” into our bodies, threatening human health. It turns out the hysteria they tried to generate was based on a study that its researchers believe went awry.

Typical of the disinformation efforts that often accompany complex and controversial research, the fringe but popular website among anti-GMO activists, Sustainable Pulse—GLP has profiled the mastermind behind this anti-science propaganda site, Henry Rowlands—wrote: “A new study shows that contrary to reassurances from industry and regulators, complete genes – including GM genes – can pass from food into human blood.

I wonder if the scientists at these biotech corporations have already identified this method? What biotechnology and biotech corporations like Monsanto have done, is they have allowed for the transfer of genes from one to the other without any regard for the biological limitations, or constraints. The problem with this is that it is based on very bad science. … How can our governing health authorities approve these as safe? 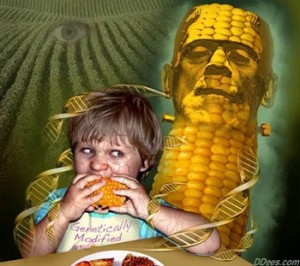 The speculation was accompanied by the usual hysteria-laden visual found in almost all anti-GMO stories, such as this drawing at Collective Evolution. When the study first came out, mainstream scientists expressed skepticism about the findings—they contradicted reams of prior search–although they remained open to the possibility that the results were indeed accurate. They urged that the research should be followed up with additional studies to see if the data could be replicated—a hallmark of good science.

Layla Katiraee, a guest contributor for the Genetic Literacy Project writing for Biology Fortified, had analyzed the real impact of the study, unaware that a follow-up study was about to be published.

The paper provides several references for studies that have examined this issue and have found DNA from our food in our organs and tissues (see here and here). However, what’s novel and unique in this paper is the suggestion that it’s whole genes, not gene fragments, that are circulating in our plasma and the suggestion that increased levels of circulating plant DNA may be associated with inflammation.

Katiraee raised a number of questions about the original study, including the possibility that the odd data might best be explained by unintended contamination. “The authors probably had very little DNA when they started, so any DNA from the environment or from their equipment could be mistaken for DNA from their samples,” she wrote.

Turns out she was spot on. Laboratory contaminants likely explain the study, according to Richard, Lusk, a University of Michigan molecular biologist who re-examined data from a controversial research paper. Lusk reanalyzed the original experiments by Sandor Spisak of Harvard Medical School and colleagues. The article was published in PLOS ONE, the same journal that published the original research.

Spisak and his colleagues argued that DNA from food made it into human blood plasma. Lusk reasoned that if he examined DNA from sources with no plausible connection to food and still managed to detect the signals of food DNA, “then those signals must necessarily derive from contamination.” Turns out Lusk was right.

“You take two cells from the same tumor sample and you can find soybean DNA in one and corn DNA in the other,” Lusk said. “This alternative DNA could not have gotten in there by any route other than contamination.”

In an e-mail, Spisak expressed his support for the new finding: “We are pleased that other researchers have turned their attention toward this phenomenon and that our work was used as a source of their analyses…Depending on prior knowledge and expectations, the same data can be interpreted in various ways. But as always, only further carefully designed and performed experiments can bring new insights and advance our understanding concerning this interesting question.”

The ‘case of the contaminated blood” is a vivid illustration of the importance of replicating studies before jumping to dire conclusions–something that anti-GMO campaigners regularly ignore in their zealous embrace of ‘single study syndrome’ to paint genetic engineering as dangerous. There has yet to be one study in a mainstream peer reviewed journal raising questions about possible safety hazards of consuming GMOs that has been replicated in another first-line journal–not one example.

Sustainable Pulse, in its junk-science account of the original study, wrote: “A high level of uptake of DNA fragments from the intestinal tract into the circulatory system appears to be correlated with the presence of inflammatory diseases. We’ve always said that science would eventually prove the truth of the dictum, “You are what you eat”. Now it is time for regulatory authorities admit it.”

Jon Entine, executive director of the Genetic Literacy Project, is a senior fellow at the World Food Center Institute for Food and Agricultural Literacy, University of California, Davis. Follow @JonEntine on Twitter