The current US election is stirring a torrid debate about the impact of global trade treaties. Not yet on the agenda, but perhaps one that should be, is a relatively obscure document that instructs governments and bureaucracies about trading issues related to genetically engineered crops.

Many GMO opponents, including advocacy environmental groups, have used this treaty to justify restrictive national laws on regulating genetic engineering, which many scientists say has bottled up both innovation and trade. It’s now facing increasing criticism for being out of touch with the current state of genetic engineering science–and may actually be causing more global harm than good.

We are talking about the Cartagena Protocol, and its purpose is to provide a roadmap for the Convention on Biological Diversity, a multilateral treaty signed at the Earth Summit in Rio de Janeiro 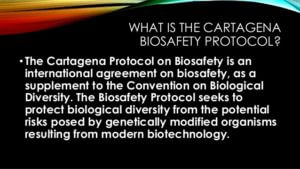 in 1992. The Protocol was developed in 1996 to regulate the trade of genetically engineered crops (called “living modified organisms” or “LMOs” in the Protocol) between countries. It was created at the request of a number of developing countries, which had not yet begun trading in GM food or crops (drugs created using genetic engineering have never been part of the Protocol). These countries had expressed some concern about items crossing their borders without their government’s knowledge.

At the time of the drafting of the protocol–in the mid 1990s, even before the first GM crops were approved–some European and even the American governments had concerns that GM crops could in some way be a threat to biodiversity. That’s still the position of many activist group opponents of GMOs, although the wider scientific community does not see a unique biodiversity problem. The recent report by the National Academies specifically addressed the issued of biodiversity, concluding there was no adverse affects on biodiversity or danger from interbreeding between GE crops and wild relatives.

The Protocol was designed to carry out the intent of the Convention for Biological Diversity, which was signed into effect in 1992, after four years of negotiations and planning. The CBD was created to address threats to species and ecosystems, and to promote sustainable development.

One major reason these countries haven’t signed (and others have) is this paragraph from the Protocol:

The difference with modern biotechnology is that researchers can now take a single gene from a plant or animal cell and insert it in another plant or animal cell to give it a desired characteristic, such as a plant that is resistant to a specific pest or disease. In the Biosafety Protocol, modern biotechnology means the application of: In vitro nucleic acid techniques, including recombinant deoxyribonucleic acid (DNA) and direct injection of nucleic acid into cells or organelles, or fusion of cells beyond the taxonomic family.

Modern biotechnology methods, including CRISPR-Cas9 and other cis-genic techniques, epigenetic approaches that affect regulation without changing a gene itself, and new methods of manipulating plant genes as well as adaptations of traditional methods, like back-crossing of genetically modified organisms, escape the scope of the Protocol.

And then, there is this paragraph from a United Nations Environment Programme (UNEP) review of the Cartagena Protocol:

There are, however, also serious concerns about genetic modification. They range from ethical considerations to potential risks to human health and the environment, and encompass also a number of socio-economic issues. These concerns are heightened given the relatively small amount of experience with the application of the technology to date, and the fact that any adverse effects may only be manifested over the long term. A vigorous, and often polarized, debate is taking place, centred on potential risks and benefits of genetic modification.

This was written in 2003, but much of the debate described here is still raging, even though long-term studies meeting scientific standards have been conducted, and we’ve had much more experience with the application of technology. But the Protocol follows the Precautionary Principle, which simply put states that lack of information should not prevent governments from passing restrictions on a developing technology. When China in 2004 agreed to sign the Protocol, Greenpeace praised the decision thusly:

The Protocol is the first legally binding international agreement governing the transboundary movement of genetically modified organisms (GMOs) and Greenpeace believes it offers the first step towards biosafety and protecting biodiversity.

Greenpeace is calling on the U.S., Canada and Argentina to stop undermining the implementation process and follow China’s lead.

But the Protocol has no shortage of critics. It’s been widely noted that agriculture itself, as practiced over thousands of years, is the major contributor to a loss of biodiversity. As Peter Raven, a renowned plant scientist and former head of the Missouri Botanical Garden, has noted:

Providing food for a rapidly increasing human population has led to the elimination of a large fraction of the world’s biodiversity over the past 10,500 years, as the human population increased and agriculture spread and intensified. When crops were first domesticated, the entire human population amounted to several million people, a number that has grown over approximately 400 generations (10,500 years) to its present level. As this rapid growth has taken place, the lowlands of tropical, subtropical and temperate regions have been stripped of more than half of their original vegetation, the remaining natural habitats often persisting only in relatively small patches.

So, yes, agriculture has contributed to a loss of biodiversity. But as the National Academies noted, the most modern forms of agriculture, including the use of genetic engineering, has actually slowed biodiversity loss.

The overall genetic diversity of the maize crops grown in the United States and eventually elsewhere was clearly decreased by the widespread planting of hybrid corn, but the insertion of transgenes to enhance the characteristics of particular crops is scale-neutral. Thus more than 700 varieties of soybeans grown in the United States have been made glyphosate resistant and the overall number of different strains grown is no different than it was before the more efficient methods of cultivation involving GE strains were developed. Similarly, the deployment of individual strains of hybrid corn, which does not involve the precise transfer of individual genes, means that many original parents are used to produce the strains that have the highest yields in particular, relatively small, regions. In short, the application of GE technology to the improvement of crops does not, in itself, limit the overall diversity of the crops, whereas the development of modern agriculture, in which certain genetically defined strains are grown over wide areas and other strains that were cultivated locally earlier may disappear, does. The preservation of genetic diversity in crops is important and of general interest, but the appearance of GE crops did not cause the problem or advance its spread.

Raven has remarked that the Cartagena Protocol has been “hijacked” in a sense to further the “green” political agenda of attacking GMOs and modern biotechnology instead of actually protecting diversity:

Having been involved personally in the formation of the Convention on Biological Diversity in the 1980s, I am truly saddened by the fact that it has become so preoccupied with GE crops. The so-called principle of ‘biosafety’ is not based on any valid scientific principles, and working it up through the Cartagena Protocol and by other means has given license to those who for personal reasons, presumably of a political nature, wish to vent their spleen. This unwise and wasteful procedure has consumed thousands of hours of time by hundreds of diplomats and idealists, and not produced any result of the slightest use for the preservation of the world’s biodiversity, which we all hoped would be the outcome of activities under the mantle of CBD. As I have explained in these remarks, there is no valid scientific basis to assume that ‘biosafety’ principles concerning GE organisms would have any effect whatever on the survival of biodiversity, which is so threatened throughout the world.

Adrian Dubock, Executive Secretary, Golden Rice Humanitarian Board, wrote in an exclusive exchange with the GLP raising additional concerns about the Protocol:

It is clear how the suspicion of GMO-crops induced by an out of date Cartagena Protocol has been harvested by anti-globalisation-anti-gmo-activists for fund raising and cynically by the organic food industry also to further their commercial claims. (Dubock’s 2014 paper, which presented his perspective on the politics of Golden Rice) also explains the difficulties put in the way of researchers in terms of international collaboration through moving gmo-crop samples: all incidentally in contravention of the key principles of the Convention on Biodiversity, a few of which are quoted above, and where the ‘Precautionary Principle’, the primary objective of the Cartagena Protocol., is only Principle 15 of 27.

The Protocol was developed in the 1970s because it wasn’t clear if transgenic biotechnology would result in unusual harm to humans or the planet. Since then, no scientific evidence has shown any harm linked directly to biotechnology. In addition, the threat to biodiversity from GM crops has been largely proven false–again, as underscored by the sweeping report by the US National Academy of Sciences which showed evidence that genetic modification may actually support increased biodiversity. However, some governments, certain parts of the EU and the United Nations, and environmental NGOs have used the protocol to justify increasingly coercive regulations of GM crop technology.