The fringe element of the anti-GMO movement has launched a new attack on modern farming and genetically engineered crops in a nine-part documentary series airing online.

The project, GMOs Revealed, is offering one episode a day through Sept. 1, with each installment available for a 24-hour viewing period. Registration is required for viewing. It’s unclear what the plan is for older episodes, though the first installment is now posted on YouTube.

The series was produced by filmmaker Jeff Hays, whose previous work includes Fahrenhype 9/11, billed as a response to Michael Moore’s Fahrenheit 9/11, and On Native Soil, which documented efforts by the families of 9/11 victims to seek further investigation of the attacks.

Based on the first episode, it appears that each installment will feature lengthy interviews with three or four outspoken opponents of GMO foods and farming practices related to the production of those foods. GMOs Revealed Episode 1 — at nearly two hours in length — featured Zachary Bush, an endocrinologist who runs the M Clinic, an alternative health facility in Virginia;  Vani Hari, an activist who calls herself “The Food Babe” (GLP profile here); and Gunnar Lovelace, founder of Thrivemarket.com, an online organic food store.

If the tone set in this first episode is representative of the rest of the series, the series will cover familiar territory for those with even a cursory knowledge of the GMO debate. Bush offered a history lesson on the development of modern herbicides and what he sees as a host of problems resulting from the Green Revolution that gave us a modern agriculture system generally credited with feeding a fast-growing population. He blames that transition for a host of problems related to a “convenience-based, chemical-based food chain.”

Hari’s segment offers her claims about a host of health issues related to what she calls an “over processed world.”  To combat this, she urges viewers to educate their children to avoid the “poisons” used by the mainstream food industry. “Nobody likes to be fooled — including children,” Hari said. “Explain to them that the food industry is playing all these tricks on them.”

The third segment, featuring the Thrive Market boss, was in many ways an hour-long commercial for a sponsor “that helped make GMOs Revealed possible.” Lovelace is introduced as a “visionary CEO,” who is “intelligent, focused and inspirational.” Viewers of the series are urged to take advantage of a special discount from Thrive Market. 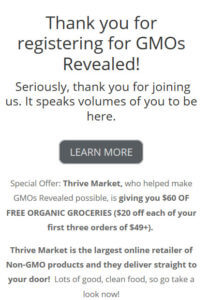 The segment is particularly interesting, when you consider how this side of the GMO debate reacted to the recent release of the documentary Food Evolution, narrated by Neil deGrasse Tyson and directed by Scott Hamilton Kennedy. Several of the people being featured in this new GMOs Revealed series were sharply critical of Food Evolution. They called it propaganda, in part because it was funded by the Institute of Food Technologists. They have not, as yet, offered the same critique of a series they undoubtedly feel is friendlier to their cause.

Future installments of the series will feature a wide range of voices from the fringes of the anti-GMO movement. Among them:

Conspicuously absent from the cast of characters are many of the more moderate voices that have spoken against GMOs and some of the farming practices and nutritional impacts related to their widespread adoption. Those include food journalist and author Michael Pollan (GLP profile here), and Marion Nestle, a professor of nutrition at New York University who writes about food and politics.