Hidden hunger: How anti-GMO activists are blocking humanitarian biofortification in Africa and Asia

It’s called ‘hidden hunger.’ Many crops grown in the developing world are deficient in nutritional qualities–which makes biofortification critical if we hope to improve food security. Hidden hunger is insidious. It strikes people who, on the outside, may appear to be consuming an adequate amount of food—mainly staple crops like rice grown on small family farms. Yet the empty calories of many staple crops disguise an invisible lack of nutrients that affect the health and well-being of people living in the margins.

The World Health Organization (WHO) defines hidden hunger as a lack of vitamins and minerals that occurs when the quality of food people eat does not meet their nutrient requirements, so the food is deficient in micronutrients, such as iron and vitamin A, needed for their growth and development. WHO estimates 2 billion people suffer from vitamin and mineral deficiencies, the most affected being women and children in families with low-incomes. These deficiencies limit their growth, development, health and working capacity, and can lead to premature death.

That was one of the main impetuses behind the Golden Rice project. According to UNICEF, more than 1.1 million children die prematurely worldwide because of vitamin A deficiency (VAD), and many more millions develop blindness and increased susceptibility to a number of diseases. Golden Rice is a good example of a biofortified crop. In this specific case, biofortification was obtained by genetic modification of the rice plant to produce and accumulate provitamin A (β-carotene) in the grain, something that doesn’t happen in naturally-occurring rice plants.

One of the leading organizations focusing on this crisis is HarvestPlus. which was founded in 1990 by Howarth Bouis, a young economist at the International Food Policy Research Institute (IFPRI). By 2016, Bouis was awarded the World Food Prize—the “Nobel Prize for Agriculture and Nutrition”—for his lifetime commitment to addressing the global problem of micronutrient deficiencies.

HarvestPlus was in East Africa earlier this summer at the July 2017 Annual Agricultural Exhibition organized by Uganda’s Farmers Federation showcasing agro-based technologies that are key to improving household food security and income. In addition to promoting pro-vitamin A rich orange fleshed sweet potato, HarvestPlus is doing the same with beans rich in zinc and iron. At the same show, Uganda’s president Yoweri Museveni Kaguta, who is passionate about modern biotechnology, launched bean varieties rich in zinc and iron. According to Imelda Kashaija, Deputy Director General of Uganda’s public research body, the micronutrient-enhanced crop varieties are meant to fight the scourge of “hidden hunger.”

Evidence at the Ag-show confirms award wasn’t in vain

HarvestPlus demonstrated the whole value chain of orange fleshed sweet potato from production and multiplication of clean planting materials; planting methods and various ways of processing the orange fleshed potato; to food products that meet various consumer needs. The lady who took me through the value chain mentioned they partner with several farmer groups that they train on how best to improve the nutrition level of their families. Several of us took a bite of the vitamin A providing sweet potato. It might not help me much as the deficiency according to WHO affects mostly infants and pregnant mothers. Bread, cake, chips, flour, and porridge were some of the products that the show-goers were trying. 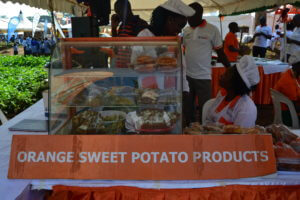 Why then the war against other micronutrient-enhanced crop products?

Some but not all biofortified crops are genetically engineered. Those that are, such as Golden Rice in Asia and the Super Banana in Uganda, continue to face resistance from anti-GMO activists despite their potential to immensely contribute to combating deficiencies of micronutrients in vulnerable communities.The success that HarvestPlus has registered in having their products impact vulnerable communities could perhaps be because they use conventional plant breeding methods to come up with these varieties.

This success challenges the key claims advanced by the anti-transgenic activists in their attempt to derail Golden Rice and Pro-vitamin A rich banana. They claim that the beta-carotene content in new varieties may be too concentrated, delivering amounts that may not be healthy; the way African farmers prepare certain foods may not makeβ-carotene readily available; that food supplements have succeeded in some countries and hence there is no need to biofortify crops.

Those arguments could all be used against conventional biofortified crops, and they all fall short. Orange fleshed sweet potato matches and in some case trumps carrots in the content of pro-vitamin A.The several unconventional products HarvestPlus initiated out of sweet potatoes show anything is possible with sensitization and awareness.

The effort to increase adoption of orange fleshed sweet potato is commendable but in Uganda banana is the key staple crops while cassava is most important in Nigeria. This is why Uganda is trying to get farmers access a pro-vitamin A rich banana. The same is happening in Nigeria where cassava through the VIRCAPlus project is seeking to improve the zinc and iron content in the root tubers of local farmers’ preferred varieties.

According to WHO, “Food fortification takes over where supplementation leaves off”. This brings in biofortification in which organizations like HarvestPlus, CIP and various research bodies are placing emphasis on micronutrient enrichment of staples as a sustainable way of addressing the short and long term effects of micronutrient deficiencies. Biofortifying staples like banana, cassava and rice is key in addressing this critical global challenge of hidden hunger. The reasons advanced by anti-GMO activists to hold back these products from communities that need them do not hold water. As HarvestPlus has shown, it is possible to stop these preventable nutrient deficiencies by intensely promoting adoption of biofortified crops through innovative products.