Joseph Opoku Gakpo, Reuben Quainoo | Cornell Alliance for Science | May 2, 2019
This article or excerpt is included in the GLP’s daily curated selection of ideologically diverse news, opinion and analysis of biotechnology innovation.

Some student associations in Ghana have waded into the ongoing debate over whether the country should commercialize genetically modified organisms (GMOs) by rallying public support for the technology.

They say Ghana stands to make extraordinary gains when the technology eventually gets into the hands of ordinary farmers and that is why the nation needs it.

“GMO is good for Ghana, as the technology will help improve upon agriculture. Issues of climate change, pest attacks and low crop yield are some of the key reasons Ghana needs GMOs. GM crops could address these problems where other breeding techniques have failed,” Kojo Fosu, president of the University of Cape Coast chapter of the Molecular Biology and Biotechnology Students Association of Ghana, told the Alliance for Science.

“With the challenges the world is facing in relation to achieving global food security and the exponential growth in population, GM technology will gradually become the order of the day and therefore there is the need for the nation to invest in developing capacity for GMOs,” he explained. “GMO may not be the only solution to feeding the world, but it is the best option the world has got now.”

The debate over whether Ghana should accept GMO crops has been ongoing since parliament passed the National Biosafety Act in 2011 to allow for their introduction. Currently, scientists at the state research institution, the Council for Scientific and Industrial Research (CSIR), say they have completed trials on GM cowpea varieties with inherent resistance to pest attack. It is likely they will put in an application for commercial release before the end of the year.

But there has been a lot of resistance, with some civil society groups whipping public sentiment against the technology as they’ve rolled out massive anti-GMO campaigns that have been underway for more than half a decade now. They have organized demonstrations, petitioned parliament and filed lawsuits seeking to stop the trials that will eventually lead to the commercialization of GM crops.

Now tertiary students studying agriculture, biotechnology and related sciences have joined the debate, calling on the public to give the technology a chance to help make the country food secure.

“Adoption of pest- and herbicide-resistant crops, and also high yielding crops obtained through genetic modification, means farmers will avoid spending on pesticides and fertilizers and use of chemicals on food crops will also be avoided,” Fosu noted.

Expectations are high that the new varieties will revolutionize the country’s agricultural sector, and Fosu agrees. “Also, the use of high yielding GM crops means more produce on small farmlands. This means farmers will spend less [on pesticides and fertilizers] but produce more with ease. This will also impact the economy of the nation as there will be more to export and more for the nation. Adoption of GMO will reduce importation of food into the nation,” he added. 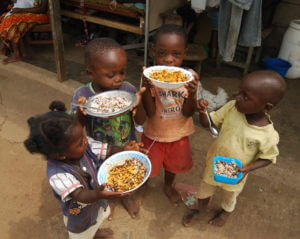 Ghana has been commended largely by the United Nations for making good strides in helping ensure food security. It was the first sub-Saharan African country to meet the Millennium Development Goal on halving hunger back in 2011. But a lot of challenges remain in the agricultural sector. One in every five Ghanaian children under the age of five suffers from stunting as a result of malnutrition. And about 1.2 million people, representing five percent of the population, remain food insecure.Ghana’s annual food import bill stands at about $1.5 billion although the country has the capacity to produce the majority of the foods it imports, including rice. The nation also loses about $400 million annually to post-harvest losses.

Samuel Oppong, president of the University of Development Studies branch of the Biotechnology Students Association of Ghana, said this is why the nation still needs GMOs.

“GMOs can help ensure long shelf life of perishable goods,” he said. “It would decrease the losses of farmers. Adoption of GMO would help Ghana increase yield and in turn increase exports and decrease imports if we engineer the crops ourselves.” He is convinced the anti- GMO campaigners “have no idea what GMOs are, or the benefits it can bring” — hence the rejection.

The Kwame Nkrumah University of Science and Technology (KNUST), named after Ghana’s first President, has one of the most respected agricultural schools in the country. It was the institution that first introduced agricultural biotechnology (which focuses extensively on the study of GMOs) as an undergraduate program in 2009 to help build human capacity ahead of GMO legalization in 2011. More than 500 first degree holders in agricultural biotechnology have so far graduated from the institution.

Richard Adu, president of the KNUST chapter of the International Association of Students in Agriculture and Related Sciences, said the importance of understanding the science goes beyond students.  “Ghanaians need to be educated about GMOs to encourage their adoption,” Adu said. “Those against the technology should be open and learn more about the importance of GMOs.”

The students are not the only ones speaking out for the technology now. Their seniors, who have since graduated from school, are also voicing their support. The Graduate Farmers Network (GFN), a group of young graduates who have ventured into farming-related jobs, have also issued a statement backing GMOs.

“We wish to indicate our support for every initiative by the state to approve and commercialize any modern scientific and agricultural innovation, including genetically improved seeds for farmer’s cultivation,” noted the statement signed by Evans Okomeng of the Graduate Farmers Network.

“We wish to indicate our support and demand for all modern agricultural innovations that can buffer young farmers against the current challenges in the sector with regards to pests, diseases, weeds, drought and other climate extremes that affect farmers’ output. For us, genetically improved seeds serve as one of the most effective approaches to deal with these challenges. Special traits that we could not achieve through conventional breeding are being made possible through GMO technology and gene editing techniques,” he said.

The Graduate Farmers also vouched for the safety of GMO crops, noting, “they have a long-term record of usage, cultivation and consumption over the last three decades with serious scientific researchers proving their explicit safety.”

The group said it’s unfortunate that there have been “unproven and unsubstantiated claims about GMOs just to cause fear with misinformation. The state must not sit unconcerned whilst voiceless farmers in the country continue to lose our crops to many factors that could be controlled through the science of GMO technology,” the statement added.

The statement warned that the government’s current flagship agricultural programs “may be a nine-day wonder and may be short-lived if we ignore technologies of improved seeds that are genetically resilient and resistant to many of the challenges on our farms. To us as a community that is pro-science and technology oriented, we are of the opinion that our country would race against time and fail to achieve results of good policies should we fail to adopt to modern innovations the sector has got to offer.”

The group noted that denying farmers in Ghana access when it comes to the application of GMO technology holds dire consequence to the nation’s agricultural future. “We are therefore by this statement challenging the state and all stake holders to remove any barriers to agricultural innovations and technologies by opening the gates and making genetically engineered crops available to both farmers and consumers.”