This article or excerpt is included in the GLP’s daily curated selection of ideologically diverse news, opinion and analysis of biotechnology innovation.
Golden Rice seed and regulatory data packages are available—without cost—to public-sector rice-breeding institutions in less developed countries where rice is the staple and vitamin A deficiency endemic. Supply is subject only to national and international regulations and simple and free agreements. The licences ensure that the inventor’s, Professors Potrykus and Beyer, objectives for their donated technology cannot be frustrated: only publicly owned rice varieties can be used, and the nutritional trait cannot be ‘stacked’ with any other gmo trait, unless the latter is also under the control of the public sector.

There will be no charge to growers or consumers for the nutritional trait: Golden Rice will cost the same as white rice. Golden Rice homozygous seed, which breeds true generation to generation, will be provided by public-sector rice breeders. All small-holder family farmers—responsible for 80% of global rice production—will eventually have access to it, with (except for commercial export—not a resource-poor farmer activity) no limitations on planting or replanting, harvest or sale of seed or grain.

This article is part four of a four-part series on golden rice based on a book chapter Golden Rice: To Combat Vitamin A Deficiency for Public Health. Part 1: The story of a GMO crop that could save millions of lives; Part 2: Will nutritionally enhanced rice work and help solve malnutrition in developing countries?; Part 3: A thoroughly studied, safe and nutritionally enhanced GMO crop approved by Australia, Canada, New Zealand and the US, but vilified by Greenpeace and ‘environmental’ activists

Addressing micronutrient malnutrition, including VAD, is consistently ranked by the Copenhagen Consensus process, as the first, or at least within the top 5, most cost-effective investments with the potential to address the world’s 30 most intractable problems. Investing in alleviating malnutrition would repay $45 for each dollar invested compared with $36 from fighting malaria and $10 from combatting HIV.

Compared with the World Bank standard, or the full cost of provision of vitamin A capsules, a common dietary supplement intervention for VAD since the early 1990s, the cost of Golden Rice to save each disability-adjusted life year (DALY) is expected to be very low, perhaps US$0.5. 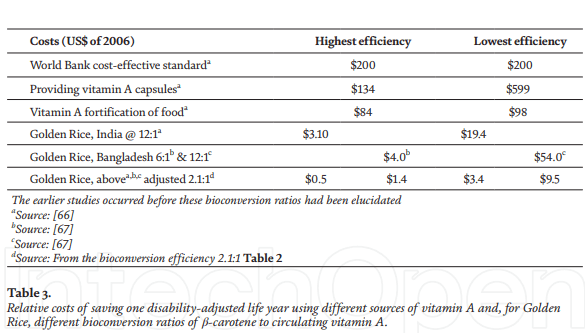 Economists have calculated that conservative adoption of Golden Rice would benefit the gross domestic product (GDP) of Asian countries by US$6.4 billion (value in US$ of 2005) annually through increased productivity enabled by reduced vitamin A deficiency-induced sickness, and improved eyesight, and ~US$17.4 billion (value in US$ of 2005) if Golden Rice adoption encouraged adoption of other nutritional traits in rice. Recently, HarvestPlus has exceeded target levels of iron and zinc in rice, which they were unable to achieve by conventional breeding, using GMO techniques. Genetic modification has also been used to introduce folate into rice endosperm. The delay to the introduction of Golden Rice in India has been calculated to have cost Indian GDP US$199 million per annum for the decade from 2002, in total about US$1.7 billion (value in US$ of 2014).

Adoption of biofortified crops, including Golden Rice, will facilitate attainment of six of the most important Sustainable Development Goals 2015–2030 (Table 4). The standard costs used by the economists referenced in Tables 3 and 4 refer to the costs of supplementation with vitamin A capsules. As when using Golden Rice, the vitamin A source has zero cost to the grower or consumer; the cost benefit of Golden Rice will be very significantly better than using vitamin A capsules.

Vitamin A deficiency remains a huge public health problem despite existing interventions. Biofortification of staple foods is a new policy priority internationally. Golden Rice is safe. There is excellent human evidence that it will work. It is expected to be extremely cost-effective. For successful adoption of Golden Rice as an additional intervention for vitamin A deficiency, the support of public health professionals is critical.