Stephan Neidenbach | September 10, 2019
This article or excerpt is included in the GLP’s daily curated selection of ideologically diverse news, opinion and analysis of biotechnology innovation.

In a recent lawsuit against Bayer over their herbicide glyphosate, emails cherry picked and received via subpoena by the plaintiff’s lawyers revealed a company employee discussing the organization Moms Across America. 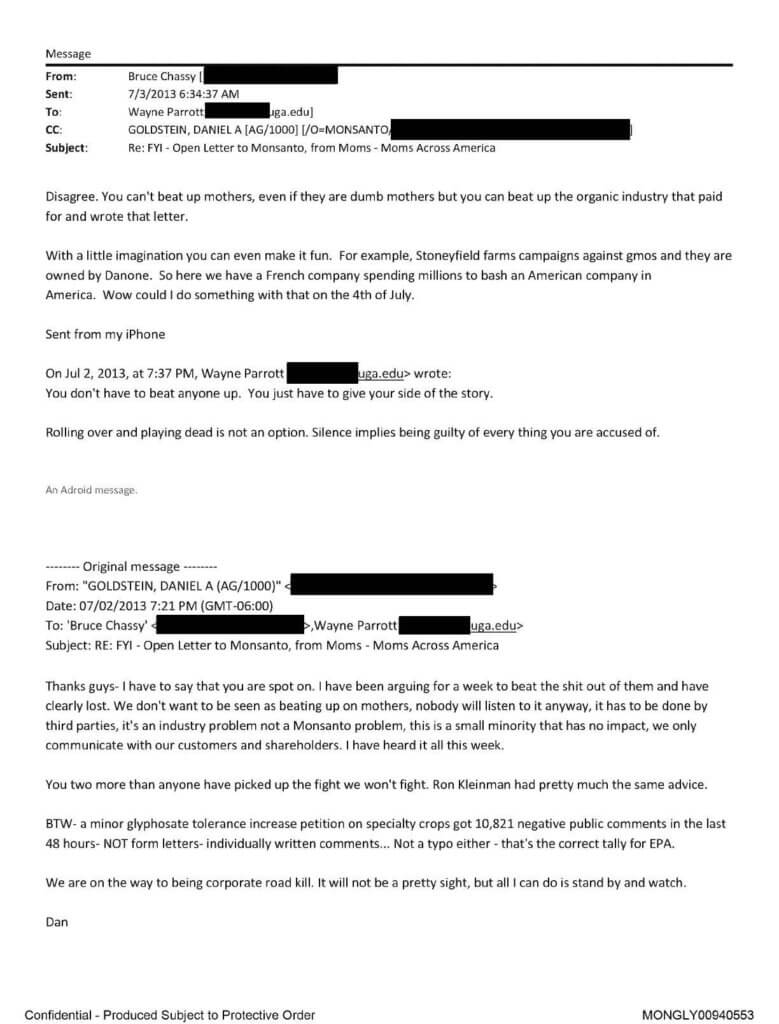 The email contains questionable language on the part of the company employee, but was clearly hyperbole. The employee says he has been arguing to “beat the shit out of them”. While the language wasn’t the best, it was clearly from frustration on his part when the whole email is read in context. Not to mention the fact that no one has actually assaulted anyone involved with Moms Across America in the six years since the email was sent.

On the other hand, Moms Across America is well known for spreading hate messages that may have contributed to an actual assault and other violent attacks. 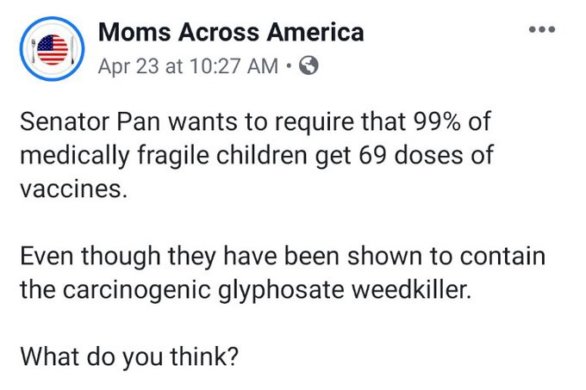 California State Senator Pan was recently assaulted by an anti-vaxxer, Kenneth Austin Bennett. Bennett has posted multiple times about this false link between glyphosate and vaccines that originated with Moms Across America according to fact checking website fullfact.org:

The origin of this claim seems to originate with the anti-pesticide and GMO campaign group Moms Across America and a report it put out in 2016…. 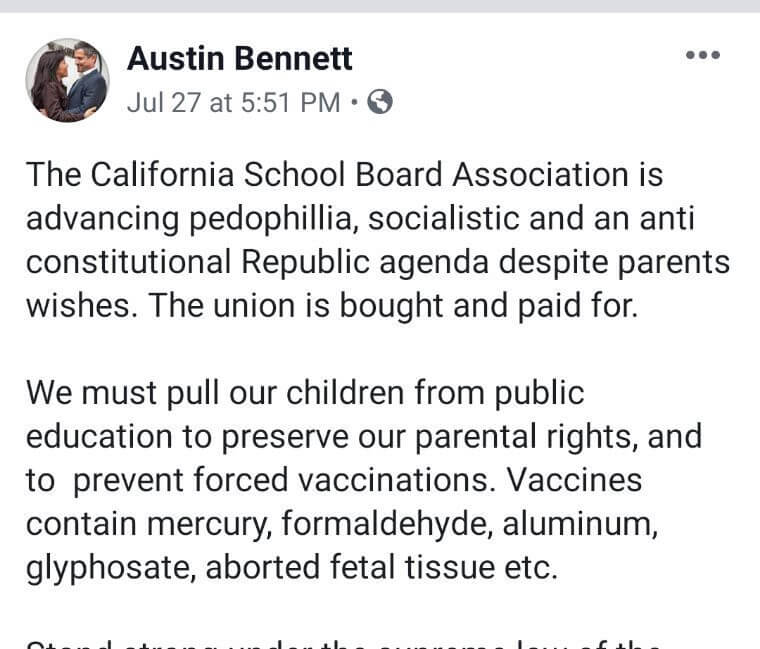 Moms Across America is so extreme that even those who agree with them on certain topics have called them out. Michael Hansen, a senior scientist for Consumers Union and a long time critic of GMOs and glyphosate, has referred to Moms Across America leader Zen Honeycutt as a “loon”.

Moms Across America was also defended and promoted by Carey Gillam in her book Whitewash, repeating many of these conspiracy theories. Gillam works for US Right to Know, the organization Lipton received emails from for a well known article connecting university professors with industry.

Neither Lipton nor Gillam appear concerned about the attacks on nutritionist Shelley McGuire who debunked similar misinformation from Moms Across America about breast milk:

In 2014, Moms Across America (MAA), an anti-GMO, anti-vaccine activist group, published what it claimed was a pilot study, which purportedly showed that the commonly-used herbicide glyphosate was found in breast milk. The group said its study provided evidence that the herbicide bioaccumulates in the human body and as a result could cause“…. endocrine (hormone) disruption, cancer and neurological disorders” in children. The story was widely picked up by the mainstream media, garnering hysterical headlines around the world and promoted by the blogosphere, although it was debunked by the science press.

McGuire contacted MAA founder Zen Honeycutt in May 2014 and requested the underlying data from the study (how the samples were collected, the age and time postpartum of the study subjects and the analytical methods of the study), hoping to evaluate the results. However, she was told MAA hadn’t collected such data.

McGuire then launched her own research project in an attempt to reproduce MAA’s study — but she couldn’t. The preliminary results from her research, which McGuire presented at a Federation of American Societies for Experimental Biology (FASEB) meeting, suggested that “…. glyphosate does not show up in mother’s milk, or is below the detection limit of a very sensitive, newly-developed assay,” as science writer Kavin Senapathy wrote in a 2015 GLP article.

The following year, McGuire and her colleagues published their peer-reviewed findings in The American Journal of Clinical Nutrition….

The lab was unable to detect any glyphosate, however, and McGuire presented these preliminary results at the Montana Federation of American Societies for Experimental Biology (FASEB) meeting in July 2015. But this is where things took a strange turn. “It was a closed scientific meeting, where the abstracts were not publicly available,” McGuire recalled. WSU put out a press release about the research the day McGuire presented the findings, but the brief article from the university did not discuss the “…. full details of the method or the limits of quantification used” for the study, as Sustainable Pulse eagerly pointed out in a blog post published the day after McGuire’s presentation.

Nonetheless, within an hour of giving her presentation at the meeting, McGuire received several angry calls from MMA’s Zen Honeycutt. Rowlands and Honeycutt also began sending harassing emails to McGuire. “I do not know how you sleep,” Honeycutt wrote in one email. “Shame on you for contributing to more confusion, lies and protecting the profits of corporations rather than people and babies……”

Over the next three years and in 40 installments, WSU sent McGuire’s emails, 12,000 documents in all, to USRTK under the Freedom of Information Act (FOIA). McGuire spent roughly three hours per installment with the lawyers so she could identify which information USRTK legally would have access to. In total, McGuire estimated she spent a month going through emails instead of conducting her research.

Hoping to avoid an unjustified scandal for WSU, McGuire called Gary Ruskin, the co-founder of USRTK, when she heard about the extensive FOIA request. “‘I will send you whatever emails you want, but this list is huge,’” she told him. Ruskin told McGuire that he knew she was hiding something and USRTK would find it. “Then he hung up on me,” McGuire recounted. “He was as rude as he possibly could be.”

Henry Rowlands, mentioned above, works closely with groups like Moms Across America to create headlines about glyphosate. He knows full well that many of these stories about “glyphosate contamination” are not based on science but are intended to create public outcry.

One of the advisors of Moms Across America, Beth Lambert, promotes the use of dangerous quackery that can harm children. Another advisor, Anita Wilson, promotes dangerous coffee enemas on children as well. The organization has promoted bleach enemas more than once on their Facebook page.

Misinformation such has this has also promoted an FBI investigation. Mike Adams, the man behind Natural News, is well known for promoting both Eric Lipton’s writing and Moms Across America. In 2014, less than a year after the Monsanto employee sent the poorly worded email, Adams actively encouraged violence against anyone supporting GMOs according to Genetic Literacy Project:

Adams posted a screed on his website (this pre-censored post, since sanitized by Adams, has been preserved on the wayback machine archives) attacking supporters of genetic engineering as modern day Nazis, suggesting that anti-GMO activists should consider murdering scientists and journalists for their crimes against humanity. Adams then alerted readers to another site, Monsanto Collaborators, which was more or less a handy online list of these so-called ‘Nazi perpetrators”–aka scientists, journalists and news organizations that believe biotechnology can play a constructive role in farming–for crazies who might want to follow Adams’ marching orders and begin assassinations. I was prominently mentioned by Adams, no doubt because of the scathing Adams profile and fact sheet summary GLP posted in April.

Adams alerted readers to this new “collaborators” site, claiming he had nothing at all to do with it, but urging everyone to read it nonetheless. Not surprisingly, anti-GMO philosopher Vandana Shiva, linked to the Adams story on one of her sites (Shiva took down the incendiary Adams post on July 28, but an archived version of it has been preserved here.)

Needless to say, the last week and Adams’ anti-GMO offensive have not unfolded as Adams had anticipated. Keith Kloor, a science writer with a blog on Discover, has written a series of articles on the Adams fiasco, documenting the train wreck as it unfolded: here, here, and here.

But more interesting is the fact that it’s now clear that Adams was behind the Monsanto Collaborators site. Analyses by the GLP, geneticist Karl Haro von Mogel and most extensively by the website This Week in Pseudo Science have demonstrated that the NaturalNews.com coding signatures–akin to a DNA match–are all over the Monsanto Collaborators site, which was actually registered hours before Adams’ first attack column was published. In sum: Adams has been busted. He published both sites. He’s also launched two other slander and pseudo sites designed to promote himself and his products while trying to hammer critics.

Adams tried to cleanse his original NaturalNews.com post calling for the killing of scientists and journalists and is now blocking access to the Monsanto Collaborators site, which he claims was actually set up by Monsanto and its supporters to discredit him and other anti-GMO activists, but the truth is out and the damage has been done.

The U.S. Federal Bureau of Investigation, besieged by complaints from targets and the science and journalism communities, immediately launched an investigation of Adams and the site, with Adams facing possible felony charges of inciting violence (if he lived in a Europe or a Commonwealth country like the U.K., he would probably already have been served).

Much of this may have contributed to a bomb attack in Italy targeting Monsanto and scientists receiving mail bombs in Mexico. According to the FBI, such conspiracy theories fuel this kind of violence:

The bulletin warns that “certain conspiracy theory narratives tacitly support or legitimize violent action”, and that “some, but not all individuals or domestic extremists who hold such beliefs will act on them”.

Examples given in the report include the October 2018 Tree of Life synagogue massacre, which the FBI describes as being motivated by the “Zionist Occupation Government conspiracy theory”; the “Pizzagate”-inspired attack on Washington’s Comet Ping Pong restaurant in December 2016; and an incident in June 2018, when a believer in the “QAnon” conspiracy theory blocked traffic at Hoover Dam in Nevada with an armored truck.

In this day and age when misinformation spread through social media has caused real harm to people, journalists like Eric Lipton need to choose a side. What is really more dangerous, inappropriate words chosen in a private email sent to just two people that was never meant to see the light of day or an organization promoting misinformation that leads to real world violence?