Chasing origins of anorexia: Are there genetic links to the complicated disorder?

This article or excerpt is included in the GLP’s daily curated selection of ideologically diverse news, opinion and analysis of biotechnology innovation.
Anorexia nervosa can appear to be fully treated until a series of life events trigger the disordered eating once again. “I remember driving home that night, in the rain, knowing she was riding with me,” Kate Horsman wrote in a blog post about the reappearance of her anorexia. The illness that Horsman never imagined would return “was back in business” and ready to resume a position in the driver’s seat.

Horsman, a 30-something Vancouver resident and holistic nutritionist, first developed anorexia as a child ballerina: “I would punish myself with what I didn’t put in my body. Instinctually.”

She is certain she didn’t become anorexic because of ballet or the modeling career that followed. Instead, she blames unhappiness and pain as the source of the disorder. “This was not about vanity, this was about survival,” she said. She describes her adolescence as a kind of purgatory, marked with more than 30 hospitalizations to treat organ failure, seizures, heart problems, and a long list of other anorexia-induced health complications.

Anorexia nervosa is the deadliest disorder in the Diagnostic and Statistical Manual of Mental Disorders (DSM). With four times the death risk of major depression, this emaciating illness is characterized by severe and chronic restriction of calories and types of food.

The disorder has long been treated as a psychological condition, though recent studies, including a landmark genome-wide association study, are forcing scientists to consider the possibility that the disorder may also be at least partially genetic and metabolic in origin.

The gold standard treatment for anorexia—a phrase best understood here as “the best we currently have” — is either cognitive behavioral therapy (CBT) or family-based therapy, depending on the age and life circumstances of the patient. Indeed, the relapse rate of anorexia nervosa has been shown to be as high as 65 percent, with a mortality rate of 15 percent in some populations. 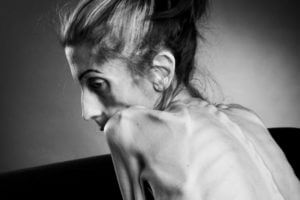 Even when a normal weight is reached by an anorexic after months or years of psychosocial treatment, certain compulsive thought patterns and behaviors often continue, lending themselves to the development of other disordered eating habits. The individual may develop orthorexia nervosa, for example, a relatively newer eating disorder coined by Steven Bratman in 1997 and defined as a fixation on eating healthy foods that is so intense it interrupts nearly every facet of one’s life. Orthorexia can occur as a sublimated — or more “socially acceptable” — form of anorexia.

The first reliably documented cases of anorexic behavior in the Western world occurred in the Middle Ages, when female ascetics were known to starve themselves out of extreme devotion to Christ — sometimes to the point of death. While many cloistered Christian women who died of self-starvation were revered as saints, those in other walks of life were routinely executed as witches from the mid-15th century until the Enlightenment.

African tribal mythology includes stories of those who would starve themselves in times of famine, so as to be able to retain food for their children. In some accounts, a select few would continue self-starvation during times of plenty, suggesting that the mere act of fasting may irreversibly alter some individuals’ metabolic response.

In 1689, Richard Morton’s description of what would later be called anorexia appeared in his “A Treatise of Consumptions”; and in 1873, Sir William Gull of London coined the term “anorexia nervosa” after studying the illness for several years. Gull’s work, as well as the contemporaneous contributions of Charles Lasègue of Paris, failed to attract much professional attention, due to the widespread perception of anorexia as “a disorder of females (e.g. usually associated with amenorrhea), whose lives were routinely undervalued in the pre-modern eras,” according to John P.M. Court, associate professor in Psychotherapies, Humanities and Educational Scholarship at the University of Toronto, and Allan S. Kaplan, professor in Consultation/Liaison Psychiatry at the University of Toronto.

By the early 1900s, following the discovery of hormones and post-mortem findings of lesions on the pituitary glands of emaciated women, many began to view anorexia as an endocrine disorder. This decidedly biological reframing piqued the interest of greater numbers of those in the medical community. Unsuccessful attempts at targeting the endocrine system to treat anorexia, however, gradually discounted the role of the pituitary or any other gland in the development of the illness. For this reason, the psychoanalytic, Freudian conception of anorexia “as a manifestation of a defense against a dreaded unconscious wish for oral impregnation” had room to flourish.

Related article:  Magic and morality: Why some consumers are afraid of GMOs

Anorexia was the first eating disorder added to the first edition of the DSM in 1952. Throughout much of the 1960s and 1970s, anorexia was chiefly blamed on dysfunctional family environments, with a focus on the apparent failings of the mother. Karen Carpenter, of the pop band The Carpenters, died in 1983 of anorexia. Her untimely death at the age of only 32 years led to widespread claims that the Western world was experiencing an anorexia epidemic. While the finger continued to be pointed at family dysfunction, many critics started blaming the diet and fashion industries for instilling anxiety in women about their bodies and weight.

The gradual reconceptualization of anorexia — as a condition resulting from congenital metabolic abnormalities in the presence of particular psychosocial realities — has been underway in the medical research community for the past few decades. This change could result in the development of more effective and comprehensive treatments, sparing those with intractable anorexia from relapse and long-term health complications. A metabolic disorder, like diabetes, involves the upsetting of normal functions of metabolism, or the set of processes responsible for generating the energy and nutrients used by an organism to survive and maintain homeostasis. 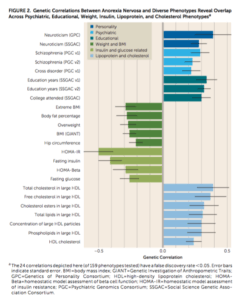 An individual with an inborn tendency to self-starve might remain asymptomatic, according to Cynthia Bulik, distinguished professor of eating disorders at the University of North Carolina at Chapel Hill and head of the international Anorexia Nervosa Genetics Initiative, until a life event “makes them reduce their food intake, switching on the relevant genes.” Such epigenetic changes could make up part of the upstream mechanisms responsible for the development of anorexia.

The search for genes that predispose certain individuals to anorexia nervosa began about 20 years ago. During this time, several associations between candidate genes and anorexia “have been reported with modest effect sizes,” according to Pei-an Betty Shih of the Department of Psychiatry at the University of California, San Diego, and D. Blake Woodside of the inpatient eating disorders service at the Toronto General Hospital, yet “relatively few of these associations have been replicated.” And genome-wide association studies (GWAS)—which involve an examination of genetic variants in large groups of individuals to see if any variant is associated with the trait or illness in question — had not yet shown any significant findings at the time their research review was published online in February 2016.

While twin studies and familial aggregation observations have long suggested a genetic basis for the development of anorexia, it was not until May of 2017 that the location of an important genetic locus, on chromosome 12, was announced in a landmark genome-wide association study led by UNC School of Medicine researchers and bringing over 220 scientists and clinicians together. The study was published in the American Journal of Psychiatry. Reinforcing clinical observations, the team found strong positive genetic correlations with such phenotypes as obsessive compulsive disorder and schizophrenia. They also found a significant positive correlation between anorexia and levels of HDL cholesterol, also known as the good cholesterol. Anorexia was negatively genetically correlated with unfavorable metabolic phenotypes, such as fasting insulin, fasting glucose, and body mass.

The research team analyzed 3,495 cases of anorexia and 10,982 controls, making their GWAS project the most powerful genetic study of anorexia nervosa to date. “Without this collaboration, we would never have been able to discover that anorexia has both psychiatric and metabolic roots,” said researcher Gerome Breen of King’s College London. The researchers surmise that in some cases of anorexia the primary dysfunction may be metabolic, while the eating disorder component may be a secondary feature.

While eating disorder specialists do as much as they can to treat anorexia, current psychosocial and behavioral treatment protocols have shown to be insufficient at combatting anorexia’s notoriously high relapse rates. Newly-developed treatments may one day include gene therapy, nutraceuticals, and remedies that target metabolic dysfunction.