Afraid of glyphosate and other synthetic pesticides? You eat 10,000 times more of the natural ones made by plants

This article or excerpt is included in the GLP’s daily curated selection of ideologically diverse news, opinion and analysis of biotechnology innovation.
In an ideal world, humans could grow enough food to feed the world without synthetic pesticides, but that is not the world we live in. Readily arable land is limited and all sorts of fauna and flora pests incessantly assault agriculture. At this time, pesticides are necessary tools to stave off our species’ starvation.

Despite pesticides’ obvious utility, humans are generally afraid of consuming these mostly unseen chemicals. That’s understandable, as various organizations have labeled them “toxins” or “carcinogens” and have even published lists of fruits and vegetables that contain the most synthetic pesticides, apparently so you can avoid eating them.

Rest assured, synthetic pesticide residues on food are safe in the minuscule amounts present – we’re talking parts per billion. What’s more, many are even less “toxic” than substances you encounter each and ever day. For example, glyphosate, the most commonly used herbicide in the U.S., is about three times less deadly than Tylenol and thirty times less deadly than caffeine. 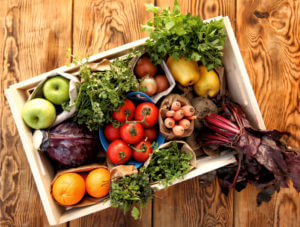 Yes, fruits and vegetables have evolved thousands of built-in pesticides, many of which aren’t so chemically dissimilar to the ones humans have created in labs. Apples, bananas, cherries, grapes, lettuce, mushrooms, and peas are just a sampling of foods that have these pesticides.

And guess what? We eat 10,000 times more of these pesticides than we do of the synthetic pesticides we’ve been conditioned to fear!

University of California-Berkeley biochemists Bruce Ames, Margie Profet, and Lois Swirsky Gold uncovered this fascinating nugget of information 29 years ago. In all, they found Americans consume an average of 1.5 grams of plant pesticides each day, which, again, absolutely dwarfs the pitiful amount of synthetic pesticides present, measured in the hundredths of milligrams.

Moreover, these natural pesticides might not be harmless. At the time of their study, Ames, Profet, and Gold noted that 52 of them had been analyzed in animal cancer tests, in which rodents are fed exorbitantly high doses of chemicals to see if they develop tumors. Slightly more than half were found to be carcinogens.

So should we panic? Ames and his co-authors don’t think so. Rather, they say, their results question the validity of rodent carcinogenicity trials. The dose makes the poison, so feeding rodents massive doses of pesticides far beyond what any human would actually consume tells us little about whether or not those chemicals are actually safe to eat.

Here’s the overall takeaway: Synthetic pesticides, at their current levels in food, are safe to consume. How do we know? Because plants have been trying to “poison” us with vastly more of their own “carcinogenic” pesticides for thousands of years, and are still failing miserably.

This article originally ran at RealClearScience as Plants Make Their Own “Carcinogenic” Pesticides, and You Eat a Lot More of Them and has been republished here with permission.