Viewpoint: Fish farming has a sustainability problem and genetic engineering might be the solution

This article or excerpt is included in the GLP’s daily curated selection of ideologically diverse news, opinion and analysis of biotechnology innovation.
As the world endures the impacts of a rapidly changing climate—sea level rise, extreme weather events, warming and acidifying oceans (among many others)—policy makers and the public should critically examine how food production contributes to these worrying trends. Animal agriculture may be the best place to start since, many scientists argue, it’s the single biggest cause of biodiversity loss and a significant source of greenhouse gas emissions.

Over a quarter of the world’s land surface is currently dedicated to raising animals for food, but that practice can be exceptionally wasteful. Despite taking up almost 80 percent of global agricultural land, livestock represents less than 20 percent of the world’s calories. Proper stewardship of the land, which absorbs nearly one-third of global greenhouse gas emissions, is critical in our fight against climate change, but human activities degrade roughly a quarter of it, and livestock production is perhaps the primary culprit.

To help combat these growing environmental challenges, concerned citizens around the world are eating more sustainable and arguably healthier diets that partially or entirely replace meat with fish, crustaceans, and other aquatic animals. Fish production generally has a lower environmental impact than land animal farming, owing to the fact that fish require less feed. Most fish are “poikilotherms,” which means they don’t use energy to heat their bodies. And unlike most land animals (homeotherms), fish don’t need to constantly maintain their body temperatures, which tend to fluctuate with their external environment. Moreover, the density of water carries the weight of the fish, eliminating the requirement for heavy bones.

Despite its lower environmental footprint, global fish production — which includes wild capture and aquaculture (fish farming) — has its own sustainability issues. Around one-third of the world’s marine fish stocks have reached unsustainable levels due to overfishing. Simultaneously, the global demand for fish and nutritional oils containing omega-3 fatty acids is increasing rapidly as more consumers recognize that consuming them is linked to reduced cardiovascular disease risk. Saturation in capture fishing since the early 1990s means aquaculture is filling consumer demand for fish. But without significant changes, aquaculture isn’t a long-term solution. 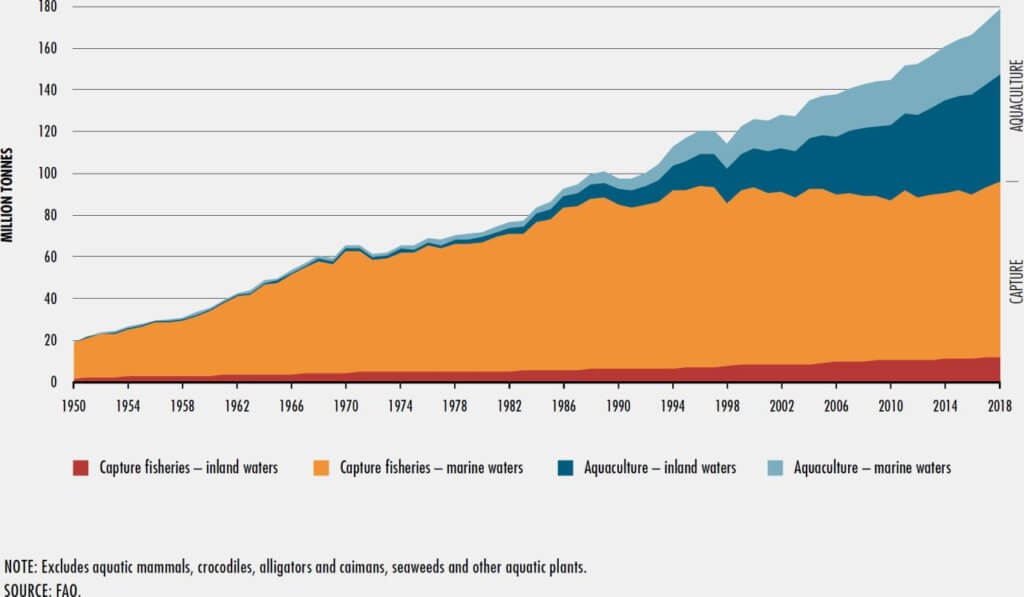 Fortunately, a valuable but misunderstood tool can help the industry become more sustainable. Of course, I’m talking about biotechnology. Genetic engineering has sped up the production of fish, and enabled the development of sustainable fish feed sources and nutritional oils. All three innovations are marching toward commercialization, and the evidence indicates their collective impact will be enormous.

While commercial fish farms have greatly improved their production systems over the years, feeding fish with fish (primarily fishmeal and oils) still poses a significant sustainability threat. In 2018, global fish production reached around 179 million tons, and humans ate about 88 percent of the produce (156 million tons) while about 10 percent (18 million tons) went towards producing fishmeal and fish oils. Finding alternative feed sources would slash the environmental footprint of aquaculture and contribute to global food security goals.

Fish maturity is based on physical features such as shape and size. The faster fish grow, the lower their environmental impact, so innovators have targeted faster growth rates as a solution to the industry’s sustainability problem. In 2015, the Food and Drug Administration (FDA) approved a bioengineered Atlantic salmon for consumption after decades of rigorous scientific review. The FDA concluded that the genetically engineered AquAdvantage salmon “is as safe to eat as any non-genetically engineered Atlantic, and also as nutritious.” This salmon is approved for sale in Canada and is slated for commercialization in the US.

Scientists at the biotech firm AquaBounty introduced two different bits of genetic information from other fish species into a bioengineered salmon: a growth hormone gene from the fast-growing Chinook salmon controlled by a DNA switch (promoter) from the ocean pout. Because the Chinook growth hormone gene works overtime, AquaBounty’s salmon grows to full size in about half the time required by conventional salmon—and consumes 25 percent less feed as a result.

Faster growth means the energy and carbon emissions required to produce the fish are lower. And since AquaBounty’s land-based aquaculture facilities are located in Canada and the US, transporting these fish to market generates lower carbon emission than delivering conventional salmon by air or ship. Additionally, the expansion of genetically engineered fish production could significantly reduce overfishing, since some of salmon feed comes from other wild fish. 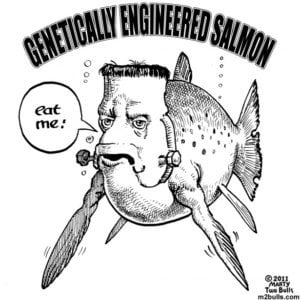 Some environmentalists have voiced concerns about the consequences of bioengineered fish escaping into the wild. In theory, genetically engineered fish may flee to the wild , breed with their wild relatives  and create a hybrid that could out-compete other fish in the marine ecosystem. Quite rightly, these are serious concerns that require proper attention and strong mitigation plans.

Considering the trade-off between hypothetical risks and the demonstrated benefits of biotechnology in fish production helps us evaluate the situation. AquAdvantage salmon are produced in land-based facilities and are sterile. Regulators at the FDA have therefore concluded it’s “extremely unlikely that the fish could escape and establish themselves in the wild.”

Shorter production time and lower feed and energy requirements clearly outweigh the low risk of fish escaping into the wild. And we get all these without compromising the nutritional value of the fish itself. AquaBounty is scheduled  to begin producing its bioengineered salmon in the US before the end of 2020, making it the first genetically engineered food animal to hit US markets. As COVID-19 continues to put pressure on food supplies, the introduction of genetically engineered salmon helps illustrate how biotechnology can help solve critical problems. 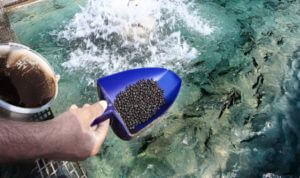 Bioengineered fish is an important step in the right direction, but it doesn’t fully address aquaculture’s sustainability issues. The industry has developed non-fish based feeds, cutting use of fishmeal and fish oil from 30 million tons in 1994 to about 18 million tons in 2018. But there are concerns that fish products grown on alternative feeds aren’t providing the same nutritional value as those fed real fish, which is high in omega-3 oils. To understand why, we need to look at the chemistry of these fatty acids.

Our bodies can’t make omega-3, so we mostly get it from eating fish, which incidentally also can’t make omega-3 but accumulate it by eating microalgae and phytoplankton. As vegetable oils replace fish oil in aquafeeds, the level of beneficial fatty acids, EPA and DHA, have also declined considerably, reducing the nutritional value that fish offer. Therefore, the aquaculture industry needs to identify aquafeeds that are derived from alternative sources and provide the same level of nutrition.

Algae are a promising source to replace fish oil, but extracting algal oil is more expensive than producing fish oil and fishmeal, though the extraction technology is rapidly developing. Additionally, algae cultivation for aquafeed is sometimes limited to species that only produce DHA fatty acids, which means the algae-fed fish lack EPA, compromising their final nutritional value. 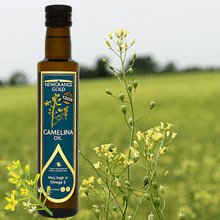 Again, scientists have turned to biotechnology to address this problem. Research teams have engineered plants like camelina and canola that contain high levels of EPA and DHA in their seed oil. These plants naturally produce the shorter version of omega-3, ALA, and scientists introduced microalgal genes that convert ALA into EPA and DHA omega-3 fatty acids typically found in fish. Research shows that fish fed with seed oil from these camelina plants show good growth, maintain feed efficiency and don’t lose nutritional value—indicating that genetically engineered plants can provide a sustainable substitute for fish oil feeds.

Now innovators are aiming to produce omega-3 oils from camelina for aquafeeds and nutritional supplements. Biotech startup Yield10 Bioscience has fused artificial intelligence with synthetic biology to create a technology that identifies trait targets to produce better plants. Using their technology platform and genome editing, they have generated camelina plants that produce double seed yields with a high content of both EPA and DHA omega-3 oils. The company has recently launched field trials of their genome-edited seeds. They are scaling seed production, aiming to plant thousands of acres of camelina to produce plant-based omega-3 oil products for fish feed and human nutrition soon. Crucially, the USDA announced in January 2020 that it won’t regulate gene-edited camelina, accelerating development of this sustainable omega-3 oil source.

Biotechnology is already accelerating production of environmentally friendly salmon, and is poised to provide more sustainable fish feed and nutritional oils in the coming years. It could also bring aquaculture production costs down, reducing incentives to overfish our oceans, which will no doubt be better for the marine ecosystem.

Surging fish demand will only be met by sustainable, low-cost solutions, enabled in key instances by biotechnology. Technical details aside, the benefits of broader biotechnology adoption in aquaculture will extend beyond the developed world to improve the lives of those most in need—impoverished people in the developing world.

Rupesh Paudyal holds a PhD in plant science and covers agriculture and the environment as a freelance writer. Visit his website and follow him on Twitter @TalkPlant