This article or excerpt is included in the GLP’s daily curated selection of ideologically diverse news, opinion and analysis of biotechnology innovation.
In the wake of a highly publicized legal settlement between Bayer, owner of former glyphosate-maker Monsanto, and lawyers representing plaintiffs alleging their cancer was caused by the popular herbicide, the Environmental Working Group (EWG) announced on July 14 that chickpeas and hummus contain “high levels” of glyphosate:

The health-food staple hummus and the chickpeas it is made from can be contaminated with high levels of glyphosate, a weedkilling chemical linked to cancer, according to independent laboratory tests commissioned by EWG.

Like EWG’s earlier claims about glyphosate in breakfast cereals and its annual “Dirty Dozen” list, these safety thresholds for humus are entirely fabricated. And the reported results were not published in a peer-reviewed journal or other scholarly forum, meaning no independent experts were allowed to verify EWG’s analysis.

The amounts of glyphosate detected in almost all the sampled items were far below the US Environmental Protection Agency’s (EPA) pesticide tolerances, but the activist group tried to sidestep this criticism, deeming the EPA’s limits “too permissive”:

Of the 43 conventional, or non-organic, chickpea and chickpea-based samples tested, more than 90 percent had detectable levels of glyphosate. Over one-third of the 33 conventional hummus samples exceeded EWG’s health-based benchmark for daily consumption, based on a 60-gram serving of hummus (about four tablespoons). One sample of hummus had nearly 15 times as much glyphosate as EWG’s benchmark, and one of two tests from a sample of conventional dry chickpeas exceeded even the Environmental Protection Agency’s too-permissive legal standard.

EWG also tested 12 organic hummus and six organic chickpea samples. Most of these also contained levels of glyphosate, but at much lower levels than conventional products.

What are these levels?

EWG, thanks to mass spectrometry work by Anresco, an analytical chemistry lab in San Francisco, reported glyphosate levels from “2,379 parts per billion,” down to 6 ppb for conventional hummus, and 13,982 ppb, down to 2 ppb for organic and conventional chickpeas.

While Anresco’s techniques are indeed capable to measuring down to those levels, no regulatory body or scientific study has detected any harm from glyphosate in such minute quantities. It’s also important to note that while “2,379 ppb” or “13, 982 ppb” may sound scary, it’s only 2.4 and 13.98 when expressed in parts per million. That’s important because EPA and other hazard levels are set in parts per million, not in parts per billion.

The EPA sets tolerances for glyphosate use on a host of plants (and some farm animal products) that vary according to product. These range from 0.1 ppm to 300 ppm, depending. EPA tolerances for glyphosate in legumes, lentils and chickpeas before the plant erupts are 5.0 ppm. That means one or two of EWG’s readings would be of concern to the EPA, but most of the readings were well below safe tolerance settings.

For chickpeas, glyphosate is used as a “pre-emergent” herbicide. It is sprayed before the plant sprouts. This prevents the plant itself from being killed by the herbicide, and prevents weed growth that chickpeas are particularly susceptible to.

In fact, when the EPA studied glyphosate for toxicity in animals (it’s not ethical to do this in humans), they found harm at levels starting at 1,000 parts per million, 100 times its own tolerance level, and one million times the “safe” level espoused by EWG. According to the EPA:

As for glyphosate’s cancer hazard, EWG cited only one source: the International Agency for Research on Cancer (IARC), a sub-agency of the World Health Organization (WHO). The activist group also claimed that California identifies glyphosate as a carcinogen under Proposition 65, but the state says it does so only because IARC does. Additionally, a federal judge ruled in June that California could not force glyphosate manufacturers to place a cancer warning on their products, because

It is inherently misleading for a warning to state that a chemical is known to the state of California to cause cancer based on the finding of one organization [International Agency for Research on Cancer (IARC)] . . . when apparently all other regulatory and governmental bodies have found the opposite.

Indeed dozens of health and environment agencies—including WHO (separately from IARC), the European Food Safety Authority, the EPA, European Chemicals Agency, and Germany’s Federal Risk Assessment Institute—have found no harm from the chemical. Only IARC claimed that glyphosate poses a “probable” hazard (which isn’t the same as an exposure risk).

Related article:  Chemical residues on foods and why dose matters

These safety evaluations of the weedkiller are based on a large body of peer-reviewed research, which is typically overlooked by anti-pesticide groups that rely on IARC. The EPA states, for instance, that its risk assessment of glyphosate was more rigorous than IARC’s hazard-based analysis.

EPA considered a significantly more extensive and relevant dataset than the International Agency on the Research for Cancer (IARC). EPA’s database includes studies submitted to support registration of glyphosate and studies EPA identified in the open literature. For instance, IARC only considered eight animal carcinogenicity studies while EPA used 15 acceptable carcinogenicity studies. EPA does not agree with IARC’s conclusion that glyphosate is “probably carcinogenic to humans.” 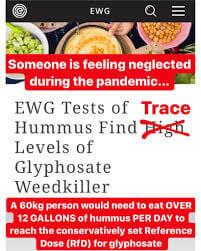 As in its “killer Cheerios” study, EWG misrepresented IARC’s conclusions on the possible harm caused by consumer exposure to minuscule amounts of glyphosate. In its monograph, IARC specifically reported that the herbicide posed a hazard to farm workers who were chronically exposed, but not to consumers. Of course, a 2017 study of more than 50,000 agricultural workers found no association “between glyphosate and any solid tumors or lymphoid malignancies overall,” thus superseding IARC’s hazard finding.

Quoting dietitian Stefani Sassos, Good Housekeeping appropriately summed up the situation, noting that hummus and chickpeas are safe to eat considering how little glyphosate consumers are actually exposed to.

‘EWG’s prescribed threshold for having ‘too much’ of the agent is very limited… Their limit is practically zero, at 0.01 milligrams per day, so their results shouldn’t be too shocking’ …. Any pull that eating hummus has on your cancer risk is far overshadowed by other lifestyle choices, [Sassos] says, like eating processed meat, drinking alcohol, smoking, or other lifestyle factors. ‘One food component isn’t going to cause or cure cancer.’