This article or excerpt is included in the GLP’s daily curated selection of ideologically diverse news, opinion and analysis of biotechnology innovation.
The COVID-19 pandemic has taken a huge toll on healthcare systems worldwide, but many African countries have done a commendable job so far in managing the crisis.

Let’s compare Africa and the United States. In the US, with a population of 328 million and almost 10 million confirmed cases, deaths stand at approximately 250,000.

According to the Africa Centers for Disease Control and Prevention, as of early November, more than 1.49 million people have recovered across the continent out of 1.85 million cases, setting the death total of less than 44,000. 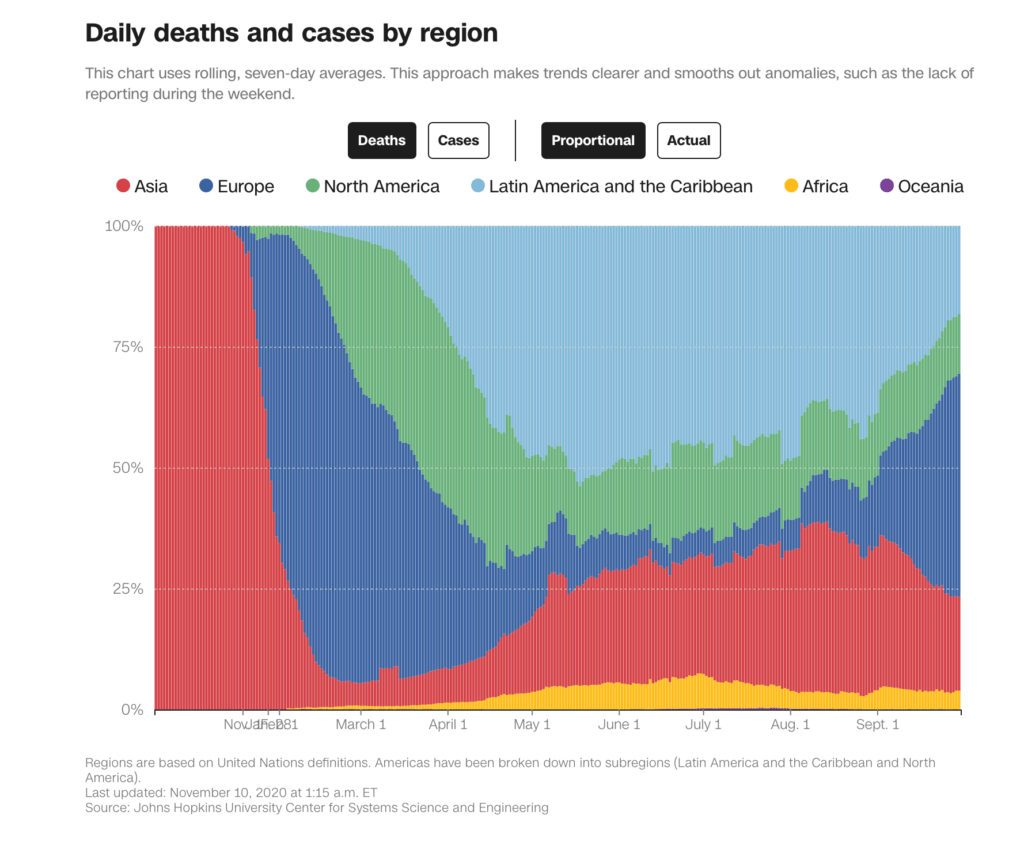 Framed another way, the US with about 4% of the global population leads the world in number of confirmed deaths. In contrast and relative to the rest of the world, the African sub-Saharan continent is a notable cold spot, along with China, New Zealand and Australia, according to Our World in Data. 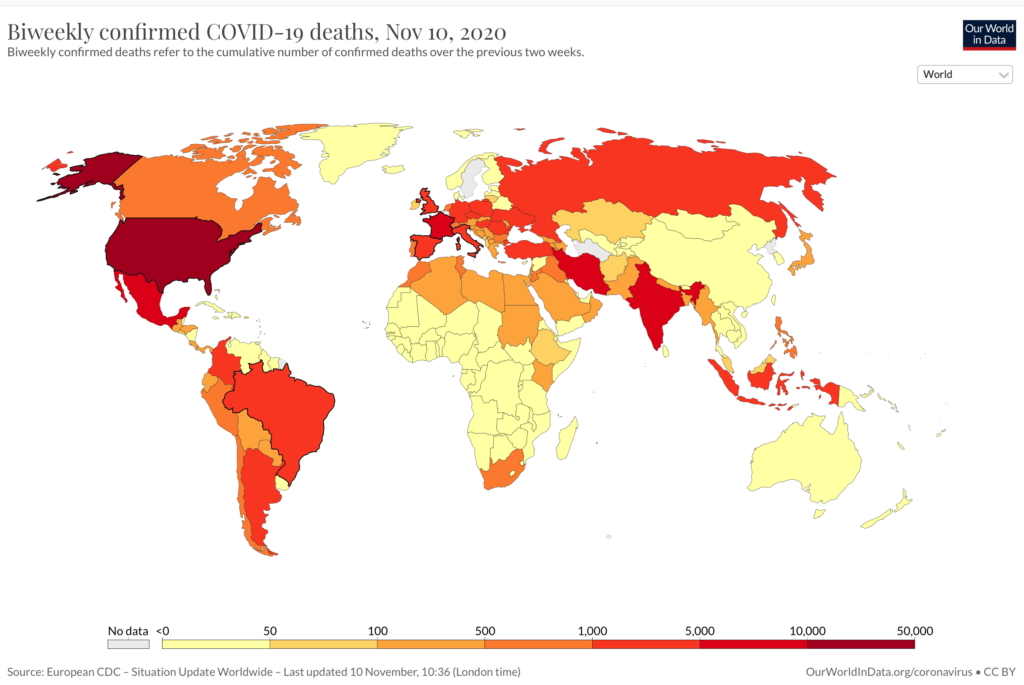 What has made Africa different?

When COVID-19 reached pandemic status, most institutions and scientists feared the worst for Africa. Their fear was rooted in the belief that most African countries lack the capacity and expertise to manage everyday diseases like malaria, thus the novel coronavirus crisis could lead to a serious health emergency. Different institutions such as the WHO feared that Africa could experience a million deaths or more if something were not done to mitigate the spread of the virus.

This appeared to be a logical possibility, as even malaria, a tropical disease, kills almost a million Africans each year. Spread by the bite of a female Anopheles mosquito, malaria is endemic to most parts of Africa.

Scientists have proposed multiple reasons why the African continent has not suffered as much as other countries and continents have, with fewer deaths and infections. For example, the low infection rates could be attributed to the shortage in availability of test kits, thus lowering the overall numbers However, the same cannot be said of the lower death rates, as most suspicious deaths are tested before burial.

Every year, multiple outbreaks of different diseases appear on the continent, ranging from the “ever common” malaria, to cholera, and Ebola.

Cholera is contracted from drinking water contaminated with feces. With a lot of slums, congested homes and poor water supply, many outbreaks occur every year.  Treating water supplies and proper handwashing techniques are used to manage cholera.

Ebola is a hemorrhagic fever that is contracted from touching body fluids of infected persons/animals (dead or alive) or eating animals that might have the virus. It has been contained on the continent with proper handwashing techniques, social distancing, and community efforts.

Malaria is contained by destroying breeding grounds for mosquitoes, such as stagnant waters, and sleeping under treated mosquito nets.

Lessons learned from managing these various outbreaks have been a useful tool for the continent during this pandemic. Most African countries such as Liberia, which have had outbreaks of Ebola have mastered public health measures such as isolation of sick people, contact tracing, quarantine for infected or suspected cases and getting them tested in time. These same approaches have been used to manage COVID-19.

Africa has a very youthful population, with fewer than 3% above the age of 65. Three-fifths of the continent’s population is age 24 or below. Most of these young people are healthy, compared to in western countries, which have high obesity rates and underlying diseases.

Indeed, populations hit hardest by COVID-19 do skew older, with 75% of all deaths occurring in people 65 and over. A young population, however, cannot be the sole reason why the death rates are low, because other regions with disproportionately younger populations have not done nearly as well as African countries: Latin America has a comparatively similar age distribution with much higher rates of infections and deaths, according to World Bank statistics.

Another factor might be the age of those who are confirmed with the virus. In the US, approximately 70% of cases are in those aged under the age of 60. According to the Africa CDC, more than 85% of the coronavirus cases in Africa have occurred among people under 60, which puts them in a better position to fight off the disease.

Related article:  Viewpoint: What defines a female athlete? Law professor, former runner's case for why Caster Semenya’s testosterone levels critical in determining if she should compete with women

Vaccines, exposure to other diseases

The African continent harbors childhood diseases that have been eradicated in the west, but against which vulnerable African children are still vaccinated. It is still mandatory for children on the continent to be vaccinated against polio, yellow fever, and tuberculosis, for example. Some scientists hypothesize that these vaccines, as well as exposure to some infectious diseases, might explain some of the low infection and mortality rates on the continent.

The BCG vaccine against TB in particular is known to stimulate innate immunity and is in several clinical trials to test protection against COVID-19. The BCG vaccine is given at birth in most African countries. (The US no longer provides it routinely.)

According to a study by the WHO-Africa, Africans who are infected with SARS-CoV-2 are twice as likely to be asymptomatic as people in other parts of the world who test positive. This may explain why healthcare systems in Africa are not being overwhelmed by severe COVID-19 cases. That is, most cases in Africa are asymptomatic.

How much of a role do genes play?

So far, there is no definitive information on the role that genes more common to sub-Saharan African populations, such as the lack of the Neanderthal gene found in non-Africans linked  to increased risk of developing severe respiratory symptoms with COVID-19,which might play a role.

Geneticists are exploring a range of other possibilities, such as distinct genetic influences on susceptibility and severity of COVID-19, and like mutations in the CCR5 gene that clearly protect against HIV/AIDs. Genetic links are more at the population level.

Also, people with type O blood are underrepresented among the infected, and helper T cell proportions and ACE2 receptor abundance may differ too.

[Back in May, the Genetic Literacy Project explored the controversial evidence about the potential role genetics might be playing in both cases and deaths].

But until we get more information on the  genetics of the virus, societal and cultural factors stand-out.

Africans have been very responsive to public health initiatives to contain the pandemic. When little was known about the virus in late winter, the vast majority of the African population supported government efforts to fight off the infection by constantly wearing masks in public places; practicing the mandatory hand washing protocol before entering any public places like markets, and shops; and staying at home and avoiding places of worship.

Many people feared the worst and thus adhered to the public safety measures. Most African countries imposed early, straight lockdowns when case numbers were relatively low. Those straightforward, drastic approaches throughout the lockdowns might have helped to mitigate the spread of the virus.

Travel and other factors

Africa, unlike other continents, is not as connected in terms of flight travels, therefore the early ban on flights by foreign governments meant there were very few cases coming in from other countries. This gave healthcare workers the chance to manage the few cases before a lot of people got the virus.

Another possible explanation for the low disease burden in Africa is that most of the population still lives in rural communities. This means more time on the farm or indoors, with little opportunities for public gatherings and interaction.

The continent is doing very well in managing the crisis so far, but we still look to see how this will play out through the changing seasons. As Africa tries to manage the crisis, the concern is what the virus could do to those who might have been infected without the need for hospital intervention. We are all still learning.

Emmanuel Gokpolu is in his final year at Kenya Methodist University School of Medicine in Meru. He aspires to become an infectious disease specialist. Follow him on Twitter @KingZoboi