3 common misconceptions about the ‘dangers’ of genetic engineering and GMOs

Marc Brazeau | April 2, 2019
This article or excerpt is included in the GLP’s daily curated selection of ideologically diverse news, opinion and analysis of biotechnology innovation.

In a previous piece, we looked at six of the most common misconceptions still floating around regarding GMOs:

If GMOs deserve a patent, how can they be substantially equivalent?

This one is actually pretty easy. The novelty that patents ratify and the properties that substantial equivalence looks at are related to different things. Patents in crops are granted for introducing a novel property or properties to a crop.

A novel, useful characteristic or set of characteristics brought about by the labor of a breeder (or breeding program) can fall well within the normal compositional range of … let’s stick with tomatoes, and still be distinct enough to warrant the protection of patent monopoly so that the breeder’s work can be protected and paid for.

Let’s look at one example from the Johnny’s Selected Seeds catalogue: Valentine – Organic (F1) Tomato Seed. According to the catalog:

We can look up U.S. Patent #8,524,992 and see what the breeders claim in unique and useful in their invention. Even heirlooms can be patented if the breeder adds value with novel improvements. The breeder Jimmy Williams holds one on the Goose Creek heirloom tomato.

So, if we wanted to assess a new fungus-resistant wheat, we would do an analysis of a wide range of samples of the parent variety, and perhaps more within the full range of commercial varieties. We’d map the range of protein and starch content, the range of metabolites and micro-nutrients produced, etc. Then we’d have a baseline of ranges for the component parts of wheat to assess substantial equivalence.

If we were looking at protein content, soft wheat usually ranges from 8-11 percent protein and hard red winter is usually between 10-13 percent. At first glance, that seems like a fairly narrow range, but higher protein wheat has 30 percent more protein than low protein wheat. And that can be within exact same variety, genetically identical, but grown under different conditions. So if a new biotech variety of winter wheat that produced either more or less protein than its parent, but still landed within the 10-13 percent range it would be substantially equivalent regarding protein content. In some cases we might zoom out to the full range of protein content of commercial wheat to assess equivalency. Within the full range, from 8-13 percent, the higher protein wheat has a full 60 percent more protein than low protein wheat. That would give a very wide range in terms of what is considered normal protein content in wheat.

Much more about this here.

Claims of GMO safety only come from industry-funded studies

This is just not true.

Let’s start in the EU.

Take for example the EU. Politicians in the EU aren’t that friendly to GMOs and they wanted to be very careful about them. So they ponied up 200 million euros over the course of decade to look into the matter. The studies they carried out are neatly summarized in A Decade of EU Funded GMO Research [pdf]:

This new publication presents the results of 50 projects, involving more than 400 research groups and representing European research grants of some EUR 200 million. This figure brings the total Commission funding of research on GMO safety to more than EUR 300 million since its inception in 1982 in the Biomolecular Engineering programme.

. . . The main conclusion to be drawn from the efforts of more than 130 research projects, covering a period of more than 25 years of research, and involving more than 500 independent research groups, is that biotechnology, and in particular GMOs, are not per se more risky than e.g. conventional plant breeding technologies.

In the searchable database, known as GENERA (for Genetic Engineering Risk Atlas) 400 studies were analysed, 197 relate to the safety of eating GM produce. Of those papers, 172 found GM foods either were equally safe and healthy to eat, or more safe and healthy to eat, than conventionally grown foods. The results are illustrated in this infographic. 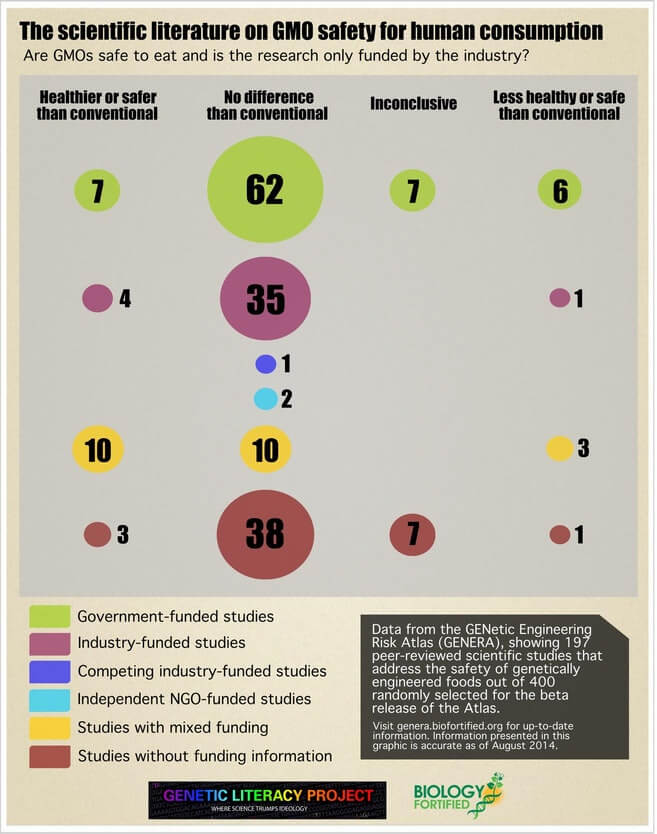 The 2007 literature review “Toxicity studies of genetically modified plants: a review of the published literature” found little to no evidence that genetically engineered crops posed significantly different risks than conventional crops, while sounding several cautious caveats and underlining that the body of literature seemed too scant for drawing confident conclusions. One statement sticks out: “Moreover, most published studies were not performed by the biotechnology companies that produce these products.”

So, we can observe that there is little daylight between what independent and industry-funded studies find. What if we were a little more rigorous in our scrutiny? Johan Diels of The Biotechnology College of the Portuguese Catholic University led a team that did exactly that. The results were interesting, but not without some problems, which we will take a look at.

First, though examine what they found in the report, Association of financial or professional conflict of interest to research outcomes on health risks or nutritional assessment studies of genetically modified products:

“Regarding ﬁnancial COI (conflict of interest), no association was observed between the presence of such conﬂict and article outcome (p = 0.631).” Did you get that? Let that sink in for a minute.

They did find a correlation between industry affiliation and favorable study outcome. I’ll grant that. But realize how far we have moved the goal posts. We started with the proposition that we couldn’t trust any of the research because it was it was all paid for by the industry. Then we showed that wasn’t true. Now we have researchers looking into the matter and they can’t find a relationship between industry funding and favorable study outcomes. What’s left is griping about the industry ties of some of the researchers. Before looking a little closer at that, let’s get one thing out of the way. When a company pays for a study, they are paying because they want to find out something. Fudging the data does not help them in their business. Maybe somewhere on the margins in a 60 Minutes kind of way, but by and large it would be highly counter productive. That’s why it didn’t show up in the data.

Much more on this topic here.

It depends on what you mean by “Feeding the world”. It means different things to different people, and they end up talking past each other. For that reason I would suggest that advocates of biotech in ag stop using the Feed the World gambit.

But let’s try to make the case that GMOs are feeding the world. The central claim is that by protecting yield, Bt and herbicide-tolerant traits in staple commodity crops have led to a world where access to stable, affordable grain and soybeans is greater than it would otherwise be. This claim is too general to verify and even more difficult to drill down into how much the general effect trickles down to the world’s most food insecure people. But “Feeding the World” has more moving parts than ending hunger, which is largely a problem of income distribution. Let’s look at some more easily measured and verified aspects of the argument, especially the impact of GE crops on income and food security for the farmers using them in developing countries.

Exhibit B: In India, researchers observed a 24 percent increase in yield per acre for smallholder Bt cotton farmers due to reduced pest damage and a 50 percent gain in cotton profit among smallholders between 2002 and 2008. They further observed the gain in profits translated into 18 percent higher consumption expenditures, a common measure of household living standard, during the period 2006–2008. In a 2013 study, researchers found that increased income cut food insecurity by 15–20 percent, while significantly improving calorie consumption and dietary quality, noting “GM crops alone will not solve the hunger problem, but they can be an important component in a broader food security strategy.”

Exhibit C: In Argentina, researchers found [PDF] savings for farmers from reduced expenditure on herbicides, fewer spray runs and machinery use have been in the range of $24-$30/ha (hectare) Net income gains have been in the range of $21-$29/ha up to 2007 and $14-$24/ha since 2008. An interesting wrinkle is that part of the gains for Argentine farmers is that Roundup Ready soybeans have allowed many of them to grow soy as a second crop after wheat harvest. The time freed up by the reduction in tillage practices allows for that second crop. Nearly 20 percent of the Argentine soybean crop came from wheat farmers supplementing their annual income in 2015, up from 8 percent in 1996. This represented a $484 million boost to national farm income in 2015 and $11 billion cumulatively since 1996.

Exhibit D: In South Africa, the results of a 2006 study on farm income and inequality were particularly stark. Bt growers had significant benefits compared to growers of non-Bt cotton in terms of gross margin over the three seasons. All other things being equal, Bt growers had a increase in gross margin of SA Rand 562/ha over growers of non-Bt. This is a significant sum. Assuming a typical daily wage of SAR 10/day in South Africa this equates to almost 2 months paid work. Of added interest is the finding that those with the smaller holdings appeared to benefit proportionately more from the technology (in terms of higher gross margins) than those with larger holdings.  The result of proportionately greater returns for smallholder farms brought down inequality significantly among Bt farmers and the benefits more evenly distributed among that group.

While not directly about food security this paper on smallholder farms in South Africa shows clear benefits. In what might be the academic paper with my favorite name – ”Genetically Modified Maize: Less Drudgery for Her, More Maize for Him? Evidence from Smallholder Maize Farmers in South Africa” – in 2016 researchers looked at survey data collected in the Hlabisa district in KZN over a period of eight cropping seasons stretching from 2001 to 2010 to produce a set of gender-specific questions which were used in small group discussion in 2013 with women and men farmers in the Hlabisa and Simdlangentsha regions. They wanted to assess what those farmers valued in both herbicide-tolerant maize and stacked-trait maize with both herbicide tolerance and Bt insect resistance.

What they found was an emphasis on the labor savings among women and yield gains among men. “Women farmers value the labor-saving benefit of HT maize alongside the stacked varieties which offer both insect control and labor saving. Higher yields are the main reason behind male adoption, while female farmers tend to favor other aspects like taste, quality, and the ease of farming herbicide-tolerant (HT) crops. Women farmers (and also children) saved significant time because less weeding is required, an activity that has traditionally been the responsibility of female farmers.”