This article or excerpt is included in the GLP’s daily curated selection of ideologically diverse news, opinion and analysis of biotechnology innovation.
When Norman Borlaug won the Nobel peace prize in 1970 for his life-saving work on plant breeding, he said: “you can’t build a peaceful world on empty stomachs”. With one in every nine people on the planet still considered hungry, Borlaug’s statement has never been more relevant. Using such statistics, biotechnology proponents have said many times that the world must produce more food in the next 50 years than it has in the last 10,000, and that we are currently using resources 50% faster than the planet can sustain—and that GMO and gene-edited crops can help us tackle both challenges.

It’s easy for well-fed Western environmental activists to dismiss such a message as they lobby to keep crop biotechnology out of Africa. But the fact remains that up-and-coming societies around the globe have the opportunity to save their staple crops, protect their local environments and, most importantly, help their citizens live better lives—and they need to utilize genetic engineering technologies to do it. 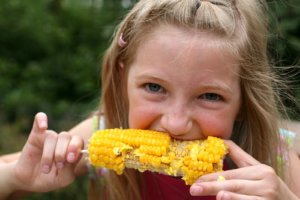 For aeons, humans have been genetically enhancing other organisms through the practice of selective breeding. The sweet corn, seedless watermelon and delicious chickens at the supermarket, and the variety of vegetables growing in our home gardens are all examples of how humans have selectively enhanced desirable traits in other living organisms.

For many years, agricultural scientists have used molecular techniques, sometimes called marker-assisted selection, to breed desirable traits into our food crops. By looking at the genome of a young plant, researchers can tell whether or not it has the characteristics that make it a suitable candidate for breeding. This allows scientists to produce high-quality seeds and deliver them to growers and nurseries all over the world much sooner than was possible with traditional plant breeding. It’s possible to make continual improvements to all sorts of properties; the most common include traits like firmness and taste. The “Intense” tomato developed by Bayer Crop Science, for example, retains its juice even when you squeeze it. That makes it ideal for fast food chains, where the last thing you want is a tomato slice that turns your sandwich or burger soggy.

But genetic engineering techniques allow scientists to insert specific genes into a plant or animal without having to go through the trial-and-error process of selective breeding or battling the limitations of marker assisted selection. Genetic engineering is therefore comparatively rapid, because it’s simply a sophisticated cut-and-paste operation. Once the desired gene is identified in the native organism’s genome, it can be cut out and pasted into the target plant’s genome. Once the new gene has been introduced, the plant can be bred to create a new strain that passes the gene from generation to generation.

How the developing world benefits

In agriculture, genetic engineering helps solve the problem of low-yielding plants crippled by insects and weeds, providing solutions that break through the natural barriers of traditional breeding practices. For example, scientists have inserted genes that produce a natural insecticide into corn plants to eliminate damage from corn borers. Tomatoes engineered to resist disease offer another significant example, though they are not yet available to farmers. If conventional methods were used to develop these crops, it would take many more years to breed plants with the desired level of resistance. These are especially important innovations in the developing world, where pests are a bigger threat to farmers who lack access to effective, expensive pesticides.

Argentina illustrates just how developing countries can benefit from crop biotechnology. One of the earliest adopters of GM technology, the South American nation is today the third largest exporter of biotech crops, most notably of soybean after the United States and Brazil (which is set to surpass the US as the largest producer). A study published by the US Department of Agriculture in 2016 estimated that biotech crops have added $127 billion to Argentina’s economy since their introduction 23 years ago. Sixty percent of this generated wealth went to producers, 26 percent to the government and eight percent to seed companies. These figures further debunk the claim that seed firms benefit at the expense of smallholder farmers.

China, quickly transforming itself into an economic powerhouse, is also beginning to recognize the importance of genetic engineering to its food security. Although Chinese officials have yet to fully embrace the cultivation of GMO crops, state-owned ChemChina’s $43 billion purchase of Syngenta and the government’s investments in CRISPR-aided agriculture research, especially disease-resistant pigs, reveal that the country understands the importance of biotechnology. And since China is Africa’s largest trading partner, these developments create an opportunity for African farmers and consumers to benefit as well.

China’s CRISPR-edited pigs are but one example of how important biotechnology can be. Scientists in the developing world are increasingly turning to new breeding techniques (NBTs) like CRISPR to address a variety of unique food security challenges. Rather than taking DNA from a different organism to breed a new plant, gene editing allows scientists to improve crops by editing or deleting the plant’s existing genetic material.

Related article:  Vitamins, nutrients can be harder to find in organic, non-GMO foods 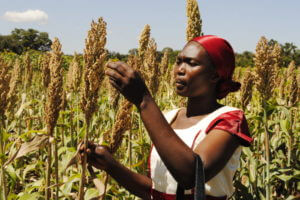 This gene-editing technology could help Africa address one of its biggest challenges: rescuing its “orphan crops,” which provide a large portion of the calories produced and consumed by developing nations on the continent. Despite their role as staple foods in the region, orphan crops receive little attention from plant breeders. There have been myriad studies using CRISPR-Cas9 to improve cereals, crops such as wheat, maize and barley, but there have been very few comprehensive studies on sorghum and millet to date, despite their nutritional importance.

As a result, production growth of these staples has been thwarted by low yields and poor nutritional content, which exacerbates the current malnutrition crises in Africa. By applying gene-editing technology to these crops, it is expected that production could increase significantly, enabling the continent to produce, consume and even export these staples in large quantities. Meanwhile, these gene-edited crops would require less land, water and fewer chemicals, thereby reducing carbon emissions and promoting environmental sustainability.

These developments can’t come soon enough. Africa’s population is projected to skyrocket to 1.7 billion by the year 2030, while Nigeria, currently the continent’s most populated country, is expected to surpass the USA by 2050 to become the third most populated nation, with a population of 400 million by mid-century. Despite these projections, there has been no acceleration in food production to mitigate the potential food crisis on the horizon, nor the nutritional dearth currently bedeviling most of the consumed food staples on the continent.

A cadre of Western environmental activist groups arguably deserve most of the credit for this lack of progress. These well-meaning but misguided campaigners have ganged up on science and innovation with allegations that GMO and gene-edited foods are not safe to consume. Such opposition prevents the introduction of these technologies to the developing world. And although many farmers in these countries have said they want access to biotech seeds, activists with a commitment to organic agriculture still hold sway around the world. Many people find their campaigns about growing food “in harmony with nature” convincing, but this argument, whether applied to our food or to other aspects of life, is dead wrong.

Consider cooking. It isn’t natural, but allows us to extract far more nutrients from our food, making it one of humankind’s greatest inventions. Or consider pasteurization, an unnatural process that has saved countless lives by killing the bacteria that are present in purely “natural” milk and other products. Suffice it to say that there is nothing wrong with modifying our food to make it healthier, safer or just tastier.

Perhaps the most popular argument against genetic engineering and gene editing is that they’re just stealth methods to allow big agricultural corporations to sell more seeds and pesticides to smallholder farmers; Bayer’s Roundup Ready crops are the typical example. Regardless of the arguments about herbicides, the fundamental problem is that this is a gross generalization: just because certain activist groups don’t like Roundup Ready soybeans doesn’t mean that Africa and Asia should be denied access to all genetically engineered crops. Moreover, gene editing through CRISPR-Cas9 has greatly reduced the expense and time required to develop new crops, thereby creating competitors to the established biotech seed companies, startups that are developing a wide variety of useful plant traits. This is significant in places where scientific research can be onerous, which includes countries across Africa, where local, independent scientists are working at a fevered pace to battle food insecurity.

Excluding a few innovative countries, Africa has largely been prohibited from utilizing crop biotechnology to improve its food security. Sadly, the same can be said for other developing countries as well. This is already totally unnecessary, but it would be a shame if such a policy continued across the world as gene editing makes it cheaper and easier to address the challenges farmers face. With a ballooning population and climate change threatening to exacerbate the destructive impact of malnutrition in the developing world, genetic engineering is needed now more than ever.

Uchechi Moses is an aspiring plant scientist based in Akwa Ibom State in Nigeria. He holds a BSc in genetics and biotechnology and writes about how capitalism and science can provide food security and prosperity for the next generation of Africans. Follow him on Twitter: @Uchechi59