This article or excerpt is included in the GLP’s daily curated selection of ideologically diverse news, opinion and analysis of biotechnology innovation.
The Environmental Working Group knows how to grab headlines with ominous claims about America’s food supply. In 2018, the Washington, DC-based public health think tank warned us that 70 percent of our produce is “contaminated with pesticide residues.” And after a successful landmark lawsuit arguing that the weed killer glyphosate causes cancer, the group cautioned that breakfast cereal may be served “with a dose of weed killing poison.” And the anti-GMO group doesn’t take breaks for the holidays. In November of that year, EWG released its “Stress-Free Thanksgiving Menu,” urging consumers to choose organic or vegan alternatives to classic Thanksgiving dishes.

The menu is accompanied by warnings about turkeys “tainted with antibiotic-resistant bacteria” and “dirty” vegetables treated with too many pesticides. But the publication also offers an opportunity to reflect on an important point as we prepare to sit down with our families for holiday meals: Everything we’re going to eat is perfectly safe and nutritious, whether it’s organic or not—and we have modern agriculture to thank for that blessing.

The centerpiece of most Thanksgiving meals is the turkey, and few Americans think about antibiotics while picking out a bird at the grocery store. But should we? The EWG warns that “most conventional turkeys are tainted with antibiotic-resistant bacteria, potentially exposing consumers to foodborne illnesses and hard-to-treat infections,” and urges consumers to buy organic turkeys instead. 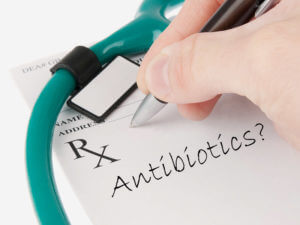 Antibiotics have been an important tool in agriculture for several decades. Animals “can get sick, just like people, and treatment should not be delayed or avoided,” according to the Centers for Disease Control. Antibiotics generally represent a safe, effective treatment and have been a boon to food production as a result. “The introduction of antibiotics to treat bacterial infections almost 50 years ago led to a dramatic improvement in animal production ….” according to a study published in 2000.

But these drugs also have been used as supplements to promote animal growth, a practice that can contribute to the spread of antibiotic-resistant infections, which kill 23,000 people annually. Still it seems that EWG overstated its case. “The CDC identified the most concerning public health threats from antibiotic-resistant bacteria. None of the most urgent threats have any relation to farm animals,” Dr. Leah Dorman, a veterinarian and Director of Food Integrity & Consumer Engagement at Phibro Animal Health Corporation, told the GLP by email. “Of the remaining 15 less urgent threats, only two involve bacteria generally attributed to farm animals.”  Along the same lines, the authors of a 2015 study said:

[M]any believe that agricultural antibiotics have become a critical threat to human health. While the concern is not unwarranted, the extent of the problem may be exaggerated. There is no evidence that agriculture is ‘largely to blame’ for the increase in resistant strains …. The debate about agricultural use of antibiotics is further complicated by its relation to other scientific, political, and economic issues. The desire for meat raised without antibiotics is part of a larger consumer movement toward more ‘natural’ and sustainable food sources.

The meat and poultry industry acknowledges the need to use antibiotics judiciously and has worked with regulators to minimize the threat of resistance. The Food and Drug Administration reported in 2016, for instance, that antibiotic use in animal agriculture fell 16 percent from 2015. The agency took a precautionary step in January 2017 when it told drug companies to stop selling medically important antibiotics like penicillin and tetracycline to food producers to promote animal growth. Although federal regulators still support “responsible use of antibiotics in …. animals,” the food industry appears committed to phasing out the drugs. “[P]oultry producers (Perdue, Tyson, etc.) and restaurant chains (McDonald’s, Chick-fil-A, Wendy’s, Burger King, etc.) have pledged en masse to limit antibiotics in their chicken,” the Atlantic reported in September.

So while EWG is partially correct that antibiotic resistance can be a problem, the group neglected to mention that good stewardship goes a long way in preventing the spread of resistant bugs. “In addition to changing how antibiotics are used on the farm,” Dorman adds, “Farmers, veterinarians, scientists and regulators are looking for new ways to protect and improve animal health that may reduce the need for animal antibiotics in the future. Nutritional specialty products and innovative vaccines are good examples.” This kind of foresight is one reason why, as the CDC says, “The American food supply is among the safest in the world ….”

Related article:  Impossible Foods exec: Environmentalist opponents are on 'wrong side of history'

If bacteria-tainted turkey isn’t enough to scare you, EWG also warns that your Thanksgiving dinner will contribute to climate change. “Meat has a significantly higher carbon footprint than other protein choices, the group argues. “So eat your vegetables: Choose a more sustainable (and cheaper!) alternative ….”

Here again, though, EWG is only telling half the story. Yes, the climate is changing and humans are contributing to it, but raising animals for food is not the problem. According to the Environmental Protection Agency, agriculture accounts for 9 percent of US greenhouse gas emissions, and animal agriculture is responsible for less than 4 percent of that total, said Frank Mitloehner, Professor of Animal Science and Air Quality Extension Specialist at the University of California, Davis.

Parenthetically, GMO crops have cut greenhouse gas emissions by reducing fuel use on farms and by encouraging no-till agriculture. In 2013, this effect was the equivalent of pulling 12 million cars off the road. EWG, however, has always opposed the use of transgenic crops and thus a practical tool to mitigate climate change.

EWG is perhaps best known for its annual “Dirty Dozen” and “Clean 15” lists of fruits and vegetables, designed to help consumers avoid pesticide exposure. Experts have long criticized the group for setting artificially low standards for pesticide residues on food. They argue that consumers are scared away from perfectly safe produce. Still, the group urges us to avoid conventional mashed potatoes, green beans, cherries, celery and apples during Thanksgiving because all of these foods made the “Dirty Dozen” list in 2018 or previous years.

But as plant scientist Steve Savage pointed out, trace amounts of pesticides in food pose no threat to human health, a conclusion that’s been backed up by the peer-reviewed literature for years. A 2011 review of the Dirty Dozen, for instance, noted that “[e]xposures to the most commonly detected pesticides on the twelve commodities pose negligible risks to consumers.” Savage also said that opting for organic produce is no way to avoid pesticides, as dozens of them are permitted in organic agriculture, according to the USDA. Summing up the issue, Savage wrote:

So, the bottom line is that there is no meaningful distinction between organic and conventional foods that the USDA tested in 2016 [the most recent data available]. Both are quite safe and consumers should not hesitate to buy and consume these foods that are well documented to promote health. The real take-away is that consumers should be very wary of organic-funded organizations like the Environmental Working Group that are trying to manipulate them with fear.

Thanksgiving should be dedicated to enjoying time with family. But the holiday also offers an opportunity to appreciate how advances in agriculture have made our food supply safer and more sustainable. Pesticides protect our food from pest infestations and prevent the negative environmental impacts of soil erosion. Likewise, genetically engineered crops help prevent food waste and reduce our exposure to potentially dangerous chemicals. Thanksgiving, when our access to an abundant food supply is on full display, is no time to sound alarms about the supposed dangers of modern farming. In fact, we should be doing the opposite. As Forbes contributor John Tamny wrote recently,

This Thanksgiving let’s remove food politics and fear from the dinner table, in favor of reason. For a holiday that’s all about abundance, it’s time that GMO critics and organic purveyors strike a more honest tone about that which costs a lot, but that plainly works against human well being.