Examining our history of advertising for OxyContin and other opioids: Have we learned enough about the dangers of addiction?

More than mere encouragements to buy, these medicine advertisements provide a window to view different aspects of our culture.

Advertising opioids in the past

Even though manufacturers produced such advertisements long before we were born, there’s a good chance you’ve seen nineteenth- and early-twentieth-century ads for different kinds of medicine. For example, a mother and her young children are featured in an ad for Mrs. Winslow’s Soothing Syrup, an advertisement produced before 1930:

Mrs. Winslow apparently first concocted her pain-soothing formulation in 1807. Her son-in-law and a partner later marketed the medicine from Bangor, Maine and New York. The main ingredient in Mrs. Winslow’s Soothing Syrup? Morphine.

Sold in the United States and throughout the British Commonwealth, the syrup boasted a whopping 65 milligrams (mg) of morphine in 1865 and was 24 proof. Later versions contained 11 mg of morphine before eliminating the drug from the syrup entirely.

Although the American Medical Association called the drug a “baby killer,” the manufacturers sold Mrs. Winslow’s Soothing Syrup until 1930. Since the syrup was first marketed in the 1800s, it also predates the US Pure Food and Drug Act of 1906 and the formation of the modern Food and Drug Administration (FDA).

Despite the drug’s “baby killer” moniker, advertising for the syrup promoted domestic tranquility and gender and class norms. It depicted an attractive young mother in a bed with her two young children, reinforcing the Victorian era’s emphasis on motherhood. The rich surfaces of the bedding, curtains, and wall coverings in the advertisements suggested a middle-class or upper-middle-class setting.

The advertisement targeted financially comfortable mothers who were concerned (or who society thought should be concerned) about the children in their care. But, since it once contained large amounts of morphine, Mrs. Winslow’s Soothing Syrup was quite dangerous. This huge disconnect illustrates how the cultural expectations and appearances of advertisements – and of society at large – can clash with the harsh, actual realities of life.

Making claims about other opioids

Later advertisements for other opioid drugs reflect different messages and target audiences. One advertisement from our own era featured pictures of people with medical ailments who could presumably benefit from the pain-relieving opioid OxyContin:

Language in the ad clearly indicated that its intended audience was medical professionals, with terms such as analgesic and titrate. Indeed, this advertisement appeared in a 2000 issue of Canadian Family Physician.

Around that time, medical professionals were being asked to re-evaluate pain. In 2001, the Joint Commission, a US organization that certifies and accredits health care programs and organizations, released its Pain Management Standards. These standards popularized the view that pain was the fifth vital sign. Vital signs are measurements the medical field uses to evaluate a person’s overall health, and the four traditional vital signs are:

The 2000 OxyContin advertisement heavily touts the drug’s pain-relieving abilities. It includes a staircase-like image called a pain ladder to illustrate how the drug may incrementally reduce pain.

Also notable is what the ad didn’t include. It noted that OxyContin’s side effects “are similar to other opioid analgesics.” According to the ad, the “most frequently observed are constipation, nausea and somnolence.” Addiction was not one of the side effects listed.

Underneath this statement, in smaller print, the advertisement noted that doctors should prescribe OxyContin “with the degree of caution appropriate to the use of a drug with abuse potential. Drug abuse is not a problem in patients with pain for whom the opioid is appropriately indicated.”

Related article:  Brain addiction: Why stopping drug use is so difficult

Of course, we know now that this claim isn’t true. People do abuse OxyContin and other opioids and become addicted, even if they have prescriptions. Thousands, if not millions, of people have abused it and similar drugs. Millions more have struggled because they have addicted family members or friends.

To combat this addiction, pharmaceutical companies have a solution: more drugs.

In the 2000s, pharmaceutical companies faced criticism and lawsuits alleging that their marketing efforts and other tactics contributed to widespread opioid addiction in the United States and abroad. Part of the companies’ solution to these charges was controversial: developing and marketing drugs intended to treat opioid addiction. Critics argued that while such drugs may indeed help people with addictions, promoting them would generate profits for companies that helped create the problem in the first place.

Maybe it’s not surprising, then, that later advertising for opioid drugs de-emphasizes the drugs themselves. This is in marked contrast to earlier advertisements. The ad for Mrs. Winslow’s syrup shows a bottle of the medicinal syrup and its packaging. The advertisement for OxyContin includes photographs of different dosages of the pills.

A 2019 commercial for another opioid, Sublocade, does not show the drug once, even though the advertisement is one and a half minutes long. Sublocade is an injectible form of buprenorphine, an opioid drug prescribed to treat opioid addiction.

Instead of showing the drug itself, the Sublocade commercial depicts something quite extraordinary in an opioid advertisement—addiction. Or, to be more accurate, it shows a man in recovery from addiction: 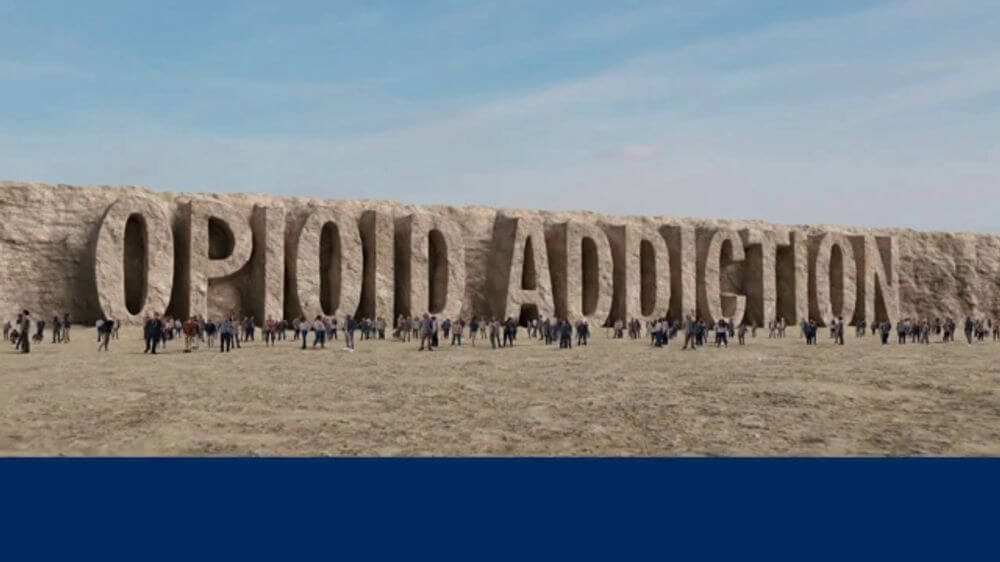 About midway through the commercial, the main person in the advertisement walks into a room and interacts with a few people. The room has folding chairs placed in a circle and people who are talking and drinking coffee, an arrangement common to many groups that promote sobriety and recovery, such as Narcotics Anonymous and Alcoholics Anonymous (NA and AA).

On one hand, given that Sublocade is prescribed to treat addiction as part of a protocol that also encourages other forms of assistance (such as support groups), maybe it isn’t too surprising that the ad depicts a sobriety support group. But the ad also includes a written disclaimer that acknowledges that Sublocade itself “can be abused.”

Additionally, the ad warns that “The body can develop a dependence on Sublocade, and can experience opioid withdrawal symptoms weeks or months after last dose.” Opioid dependence and withdrawal are two signs of addiction.

This advertisement shows a support group for opioid addiction. At the same time, it also indicates that people may eventually attend such sobriety support groups if they become addicted to drugs such as Sublocade, the very product the commercial is promoting!

The manufacturer may be including these warnings in part because of legal reasons. Many US states and localities have sued pharmaceutical companies, stating that drug manufacturers heavily promoted their products and de-emphasized their addictive properties. Sublocade’s manufacturers may want to prove that they’re more responsible than other companies in the industry to avoid such future legal problems itself.

Maybe, just maybe, the Sublocade ad also indicates more positive developments. Could it be that we’re finally learning more about opioids, or at least learning about their potential dangers so we can communicate them? Opioids can reap tremendous benefits but can be very dangerous. Acknowledging both is a responsible and informative tactic. Perhaps the truth is more soothing than any syrup can ever be.