Andrew C. Kimbrell (born 1954) is an American activist and public interest attorney who founded and is the executive director of the Center for Food Safety. Through CFS, Kimbrell acts as a coordinator for legal challenges to conventional agriculture and crop biotechnology in particular. His goal, as stated, is not always to win cases but to ‘disrupt’ the workings of government to slow or stop the pace of technology innovation related to food production.

CFS’ stated mission is to protect human health and the environment, focusing on the use of harmful food production technologies, and by promoting organic and other forms of sustainable agriculture. Since it founding in 1999, CFS at Kimbrell’s direction has filed hundreds of law suits, often in partnership with EarthJustice and other activist organizations, targeting various U.S. government agencies. For example, it filed a joint suit with Public Employees for Environmental Responsibility (PEER) against the U.S. Fish & Wildlife Service seeking to ban GMO crops from 25 national wildlife refuges.

Kimbrell is an outspoken critic of Senator Pat Roberts’s national mandatory labeling bill, which he claims is unconstitutional because it”…clearly discriminates against rural Americans, lower income Americans, minorities and the elderly,” basing his opinion on the fact that the bill includes a voluntary provision for food manufacturer’s to provide information on GMOs via QR codes, websites and call-in numbers. He believes this language discriminates against people without smart phones.

Kimbrell has long be an advocate for mandatory GMO labels as a means to get stigmatize biotechnology and scare people into avoiding it. As far back as 1997, he said “we are going to force them to label this food. If we have it labeled, then we can organize people not to buy it.” He promotes organic agriculture and what he calls humane farming. Via litigation efforts Kimbrell takes credit for keeping various GMO products off the market and claims GMOs and Monsanto “can be beat.”[1]

Kimbrell worked as policy director and legal counsel [2] at the Foundation on Economic Trends (FOET) under the leadership activist Jeremy Rikfin. Kimbrell and Ronnie Cummins led a failed effort by FOET in the 1980s which targeted meat consumption and sales at fast food restaurants called the “Pure Food Campaign.”

In his role as policy director Kimbrell lobbied Congress for the Foundation on Economic Trends as a non-profit public interest organization that monitors advances in biotechnology, with an emphasis on the environmental, economic, social, and ethical impact of new technologies.

“If we start patenting cells and genes, we take the common heritage of all of us and we allow it to be corporately enclosed. If there is a gene—and I’m not saying there is. I think it is a reduction in the view of life to say there is—but should there be genes which control IQ or control other beneficial traits, much less those that cure disease, I don’t want to see those genes-—and I don’t think it’s in the public interest to see those genes under corporate control. I think it’s an insult to the scientific community.” [3]

Kimbrell, in his written testimony to the committee likened biotechnology and it’s possible effects on society, in a rather doomsday fashion, to the nuclear revolution claimed:

“Genetic engineering represents the ultimate tool. It extends humanity’s reach over the forces of nature as no other technology in history, perhaps with the exception of the nuclear revolution.” [3]

Mr. Kimbrell testified before Congress that the government and corporations would ultimately own the human race due to advances in genetic technology, and the ultimate patenting of genes.

“By providing the government’s imprimatur on the genetic manipulation of animals and all other life forms, it provided a federal guarantee that the raw material of the biotechnology age, all “multi-cellular creatures” including all animals species, could now be exclusively owned, used and sold by corporate America.” [3]

In addressing the issue of biotechnology in general Kimbrell, representing the foundation had this to say in response to a question posed by Senator DeConcini:[6]

Question 1: “Are you opposed to the idea of biotechnology in general?

Answer 1: “Neither myself or my Foundation (the Foundation on Economic Trends) is opposed to biotechnology in general.”

After working for eight years as the Policy Director at the Foundation for Economic Trends, Kimbrell established the International Center for Technology Assessment (ICTA) in 1994. ICTA’s website states its mission is, “to providing the public with full assessments and analyses of technological impacts on society.”

In 1997 he spun-off the Center for Food Safety from ICTA as a non-profit organization whose stated mission is to protect human health and the environment, focusing on the use of harmful food production technologies, and by promoting organic and other forms of sustainable agriculture. Many people confuse CFS with the Food and Drug Administration’s Center for Food Safety and Applied Nutrition.

ICTA remains a legally separate for financial reporting but is co-located with CFS and the law firm of Kimbrell & Mendelson (now Kimbrell, Kimbrell & Solen) with whom it shares staff and other resources. CFS’s primary tactical toolbox consists of litigation, regulatory rule-making petitions, and legal support for “sustainable” agriculture advocates.

In addition to being a co-plaintiff, Kimbrell’s army of attorney’s at CFS are also representing organic farmers, Sierra Club, Beyond Pesticides, Greenpeace and the other plaintiff’s against USG agencies and/or biotech and crop protection companies) – Kimbrell’s army of lawyers is tied into more than 50 suites and more than 30 appeals. For full list see Center for Food Safety article for full list.

Kimbrell is co-founder and hosts at his D.C. offices “Foundation Earth” which claims to be focused on exposing “true cost economics” linking environmental and social cost line items to corporate reporting. The group was created in 2011[7] and recognized as a 501(c)(3) non-profit by the IRS in 2012.[8] However, they raise their funds via Network for Good and have only reported direct income of $72,000 in 2012.[8] Kimbrell is still on the board, along with Friends of the Earth former president Brent Blackwelder and Rainforest Action Network founder Randall Hayes.

Organic Consumers Association was originally a project of the ICTA/CFS which Kimbrell spun off under OCA’s director Ronnie Cummins in 1998. One of OCA’s stated goals is to achieve 100 percent organic agriculture in the next 50 years and the group tackles a range of issues which disparage conventional production (including conventional pesticide use, animal welfare and corporate control of farming), its major area of focus since its founding has been disseminating anti-GMOs propaganda.

The Turning Point Project was a 6 month campaign launched in 1999 led by the Foundation for Deep Ecology, which ran full-page newspaper ads critical of biotech and industrial agriculture and was led by Kimbrell, Andurah Mittal at Food First and Gerry Mander of International Forum on Globalization (IFG). In September 1999 it ran its first full-page advertisements in the New York Times with the headline “Extinction Crisis” and an article about climate change. In all it ran 25 articles, several of which were highly critical of biotechnology and modern, scientifically backed agriculture practices:[10]

At first it was unclear who was behind this campaign, which were very expensive. In the pages of the Times itself, columnist and economist Paul Krugman asked, “Who’s paying for those ads?”

At the bottom of each ad, a partial list appeared of “coalition” members (examples included Greenpeace, Earth Island Institute, Humane Society of the United States and Friends of the Earth). Its first ad claimed that Turning Point was “a coalition of more than 50 non-profit organizations.” As the campaign marched forward, the claim grew to “more than 80.”

However, a subsequent review of 2009-2012 tax filings for the organization revealed that nearly 100% of the funding received from one source–The Foundation for Deep Ecology (FDE). FDE also directed contributions to the vast majority of signatures to the campaign. Douglas Tompkins’ “Foundation for Deep Ecology” paid the Turning Point Project $1,233,000 between 1999 and 2000, during the time period when The New York Times was running its ads. In its IRS returns for those two years, Turning Point reported a total combined income of $1,294,640 (only $61,640 or 4.7% coming from “other sources”). During this time period the FDE also gave Center for Food Safety $1.1 million and CFS sister organization also run by Kimbrell, the International Center for Technology Assessment,$1.2 million. The Turning Point Project did not file tax returns after 2000. [12] [13]

Kimbrell was a founding board member with Steven Druker of the cult Maharishi movement of the Alliance for Bio-Integrity which engaged in litigation tactics to block GMO foods. In one lawsuit decided in 2000, it sued the FDA on the grounds that the agency’s lack of labeling and mandatory safety testing violated food safety laws. An United States District Court in Washington ruled that the FDA “was not arbitrary and capricious in its finding that genetically modified foods need not be labeled because they do not differ ‘materially’ from nonmodified foods.”

Kimbrell has been a board member, registered agent or open collaborator with dozens of “pop-up” advocacy campaigns targeting food and agriculture, biotechnology research, intellectual property rights, men’s health and men’s rights issues. In addition to the campaigns and organizations noted above and below, he has reported the following other affiations:

Many of Kimbrell’s campaign and organizational websites were originally registered to Steve Urow of GreenPeople.com (which is no longer a site). Urow was also the registered contact for Organic Consumers Association and other sites and campaigns including MonsantoSucks.com, which has not been update since April of 2013. 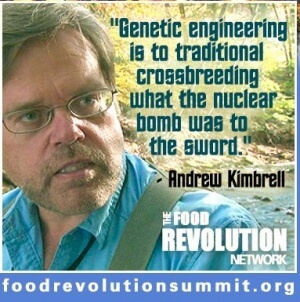 Kimbrell is a featured speaker and promoted as part of alternative health and vegan lifestyle promoter John Robbins’ “empowerment package” sold by Robbins and his son Ocean Robbins.[18] Robbins and Kimbrell are frequent co-panel speakers at anti-GMO events and are promoted by Jeffrey M. Smith and the Institute for Responsible Technology.