Nicholas Staropoli | May 15, 2017
This article or excerpt is included in the GLP’s daily curated selection of ideologically diverse news, opinion and analysis of biotechnology innovation.

This week’s features: A new book hyped by several sites is likely based on pseudoscience, which underscores why physicians need to be more careful when discussing epigenetics. Plus, see what’s trending on the Epigenetics Literacy Project.

That’s right, you heard me correctly… you can alter your gene expression and it’s modifiable… and that, my friends, are what epigenetics refers to.

Another physician whiffs at explaining epigenetics

When it comes to your health–who do you trust the most?

Many people rely on their favorite news outlet, like the Washington Post or the New York Times. There is Google Doctor, which can provide an answer to any question, in seconds, although reliability is always an issue.

But for many of us, the source we trust the most when it comes to our health is our physician. Which is why a recent article discussing the relationship between our health and epigenetics has me worried–yet again.

In the April 3 Epigenetics Around the Web, I chastised Havard-educated TV doctor Sarah Gottfried, whose new book–“Younger: A Breakthrough Program to Reset Your Genes, Reverse Aging, and Turn Back the Clock 10 Years”–contains several irresponsible statements about the relationship between human health and epigenetics. For example, she perpetuated the misconception that lifestyle changes allow a person to control their genes. The following week, I critiqued another physician (although not a practicing one), Laura Catena, for misrepresenting epigenetics and inheritance in a Huffington Post article.

Now, another an “integrative medicine physician” is misrepresenting the science about epigenetics: Julie Chen, who practices in San Jose, CA. In a post on Huffington Post, “Epigenetics: What Does That Mean? Why Do We Care?” Chen demonstrated repeatedly she does not understand epigenetics.

Making similar mistakes in her analysis as Gottfried, Chen operates on the assumption that epigenetics allows us to control our genes, writing: “That’s right, you heard me correctly… you can alter your gene expression and it’s modifiable… and that, my friends, are what epigenetics refers to.” She added: “The message I want to convey here is that you are not a slave to your genetics.”

Epigenetics doesn’t allow you to control your genes. Period. This pervasive belief is dangerous and needs to stop.

In reality, there are numerous cellular and molecular interactions that play a role in gene expression. Some of these processes do respond to the environment, but many do not. This idea worries me because when you tell someone they can control their genes, they start to believe they don’t need to get tested for diseases with substantial genetic basis, such as cancer. Why get an invasive procedure like a colonoscopy if eating right will allow you to keep those pesky cancer genes in the off position? Why pay for an expensive genetic screen when it’s easier and cheaper to eat some kale and rise above the destiny in your DNA.

This idea that epigenetics may play a role in how the environment affects your health is new and poorly understood. For most practicing physicians, it wasn’t covered in school–not even in undergraduate. And most of the science is not based on human studies so the applicability to humans is still unclear. Because of how much trust these people have in society, it’s best physicians (and other care providers) refrain from advising their patients based on epigenetics until the science is more settled.

Daniel Keating, University of Michigan psychology professor, says his research has found a link between “early and lifelong anxiety and stress, leading to problems in social relationships and mental and physical health—and even to shorter lives.” Keating has a new book, Born Anxious, in which he outlines his belief that epigenetics is the mechanism that underlies this idea. But it’s more likely that Keating is misstating the science.

Excerpts from and reviews of the book have popped up on several sites over the past few weeks. Huffington Post, NBC News, Life Hacker, Mic but the most egregious one is the excerpt that appeared in Scientific American. 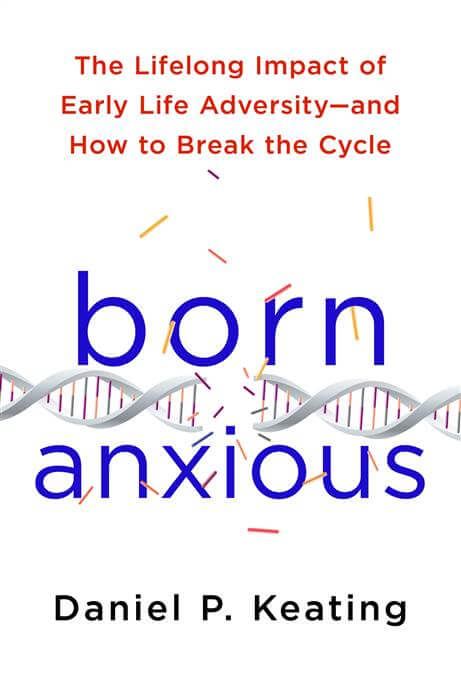 First, though, it’s important to point out this isn’t the first time I addressed Keating’s opinions about epigenetics. In the April 11 EATW, I dissected an article he wrote on CNN in which he claimed that income inequality causes stress that, in turn, induces life-long epigenetic changes. In that critique, I noted that Keating was falling into a trap many do when there is an unexplainable phenomenon or connection–they just claim epigenetics is the link. As Sir Adrian Bird a geneticist at the University of Edinburgh famously said: “Epigenetics is a useful word if you don’t know what’s going on — if you do, you use something else.” A logical fallacy he repeats in Scientific American.

The article describes the work of a couple of scientists working at McGill University on rats and stress tolerance: Michael Meaney and Moshe Szyf. After describing their work, Keating jumps right to this declaration, “There it is, I thought, there’s our answer: stress can get under the skin, changing the very way our genes function.”

While Meaney and Szyf have done some interesting work, there are several reasons not to trust Keating’s conclusions. First of all, he has just one publication on epigenetics and it wasn’t a study in which he attempted to validate his hypothesis in a lab. No, it was a review of others’ work in the field. Second, all the work in this field has been done on rodents–it always bears repeating: humans are not mice. Just only one-third of rodent studies have results that actually translate to humans. And when it comes to stress and anxiety these studies may be even more unreliable. Human psychology is far too complex to be fully understood in a rodent study. Not to mention how transient epigenetic changes linked to early life stress have been shown to be–recent studies have shown that a positive experience can remove them which throws a lot of cold water on Keating’s claim that they can impact an entire lifetime.

I haven’t read Born Anxious yet but based on Keating’s previous work but I suggest if you’re looking for a good read to look elsewhere.

The human brain is separated from immune cells in the bloodstream by the so-called blood-brain barrier, which effectively protects the brain from most pathogens and toxins. But two new studies new work is questioning how separate they really are.

Previous research has demonstrated that saturated fat is more fattening and less muscle building than polyunsaturated fats. A new study shows that the choice of fat causes epigenetic changes which in turn could contribute to differences in fat storage.

One idea that has been investigated by crop scientists is modifying a gene’s behavior through altering a plant’s epigenome. The idea is still in its infancy and faces many challenges, but experts believe epigenetically modified organisms (EPOs) may hold a great deal of promise for offering solutions to these agricultural problems.